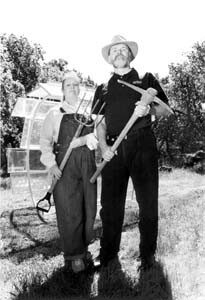 Rural experience: Kristina Lucas and Michael Hayden are two of the artists whose work is shown in the “Arboresence” exhibit at the Paradise Ridge Winery.

Artists branch out in conceptual exhibition

SUMMER SEEMS to have already visited this five-acre grove at the Paradise Ridge Winery. The tree frogs are in full rhythmic croak, the still air occasionally stirs with hot, grassy gusts of wind, and the soap root is poised to begin its mysterious afternoon bloom.

But such obvious beauties are only what is easily visible on this Fountaingrove hillside. When a visitor takes a moment to stand quietly and really look at the grove’s features, surprises arise. Paradise Ridge co-owner Walter Byck is familiar with these surprises.

“It’s contemporary art!” he exclaims with a smile.

While it’s certainly contemporary, the question of whether it is art must be answered by each viewer’s interaction with the site. Brooklyn sculptor Lars Chellberg has glued miniature forms onto a group of rocks, placed with the intent that the summer-long grasses will obscure them. Moss-covered rocks have been engineered by Oakland artist John Roloff to stay green even during the withering afternoons of August. A granite outcrop whose very head has been sawed off by Roloff allows a viewer to peek directly into its geological innards. At just the right spot in one copse, a giant cone shape is articulated only by Dixon conceptualist Chris Daubert’s colored banding of selected trees. On the FM dial, San Francisco sound artist Lewis deSoto’s recording of the surrounding earth drifts in with the dust and the sunlight. Santa Cruz resident Nobuho Nagasawa’s wine and sand clock checks the time; Santa Rosa artist Kristina Lucas has literally stretched the idea of falling sky; and Santa Rosan Michael Hayden invites entrance through a portal of light.

Titled “Arborescence,” meaning to branch like a tree, this exhibit of conceptual artwork is curated by Gay Shelton, director of the Sonoma Museum of Visual Art.

“These aren’t great big pieces of pop art,” Shelton warns. “You’re going to have to look for them. People will be scratching their heads and sometimes they’ll exactly find it. It’s an epiphany.”

“Arborescence” opens May 16 and will remain in place for almost a year. The luxury of such a long exhibition attracted Kristina Lucas almost as much as the very nature of nature itself, which has begun tenaciously attaching itself as spiders and vines creep onto the 400 weighted lines she has girded down to the ground from a hanging sapling frame. Securing sky-blue balsa wood rectangles onto half of her lines, Lucas attempts the impossible: to enclose the firmament.

“The intention of the lines is to really define the piece, like a frame would define a painting,” she says. “They’re very architectural and rigid and straight, but there’s something very organic about them, too. It’s also really fun, because I haven’t done too many outdoor pieces, but wherever lines are, especially in nature, there is change.”

CHANGE OFTEN requires a map. Walter Byck provides it. Sort of. “The idea of the show is that the entrance will have a field guides with pages on every piece with clues on how to find the piece,” explains Byck, who opened his land to artists four years ago. But with the exception of Hayden’s, Lucas’, and Roloff’s work, most of the art will be found only by the artful eye.

While discovering the small sculptures and the illusory cone may require some work, all that one needs do to appreciate light sculptor Michael Hayden’s art is to step through it.

Interested in turning sculpture “inside out,” Hayden creates prismatic peepshows that encourage a viewer to move through, rather than around, the work. Remembering an early installation that required the gallery owner to completely traverse it in order to reach her office, Hayden smiles.

“It was an exploration of mischief,” he recalls. “I just enjoy making people have to rethink what painting and sculpture are.”

Creating an glimmering archway of holograph-laden glass that marks the entrance to the “Arborescence” exhibit has allowed Hayden to complement another of his works permanently on-site at Paradise Ridge. Turn toward the “roots” of the exhibit–that is, away from the grove–and a distant hillside winks and glows with a holographic “sail” that Hayden has established there. The glass sheets billow with rainbows as the air gussets them about.

HAYDEN IS an internationally acclaimed artist whose work, among other placements, is experienced by some 18 million people a year at Chicago’s O’Hare airport. Wearing a T-shirt advertising his Thinking Lightly business, inscribed with the tasteful motto “I’m a friend of Jack Shit,” Hayden, 56, is a hearty man who discusses pizza dough recipes as easily as the refined techniques inherent in his work. Not incidentally, he is married to colleague Lucas.

But he probably wouldn’t be standing next to his glowing outdoor archway if he hadn’t had the good sense to get kicked out of art college. When a fascination for Day-Glo paints led him to begin making frescoes with them, he was forcefully invited to leave. A little notoriety goes a long way, and when Hayden created a glow-in-the-dark sculptural installation for his native Canada’s 100th anniversary, his work brought such notice as to catapult him into the artistic ether.

Hayden’s name is on some 12 patents, and all of them explore the different methods of light refraction. But for all of his varied methods, it simply comes down to the pretty colors of the rainbow.

“It starts there and ends there,” he says. “The things that make me curious and make me explore further are the iridescence that happens on mahi-mahi fish or on butterfly wings or on the throats of hummingbirds. How come they iridesce and we can’t?

“I just can’t help myself,” he says. “I have to find out how to do it, how to control it, and how to have it so that it can live outdoors in the real world. Holograms go away if you expose them to ultraviolet light or moisture. For me to develop systems so that these can survive out there has been a challenge.”

Hayden’s portal contains the holograms between two sheets of tempered glass in a hermetically sealed environment that is breached by neither UV rays nor rain. And it just doesn’t seem to matter how many times or how many ways he’s explored this subject. The man is hooked.

“I’m beguiled by transmission phenomena,” he admits with a shrug. “I’m just really interested in what happens when sunlight penetrates these panels.”