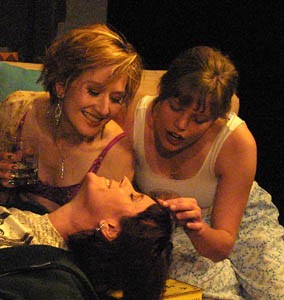 Is theater culturally important enough to be the subject of a play?” asks an ersatz audience member as she smashes through the fourth wall to interrogate the cast of Anton in Show Business. And the real audience can’t help seeing her point. A piece of theater about the state of modern theater? That’s gotta be as annoyingly self-indulgent as an ’80s hair band singing about how tough it is being a rock star, right? Seems like a safe bet. But it turns out to be wrong, wrong, wrong.

The action in the Actors Theatre production of Anton in Show Business, directed by Joe Winkler, starts where it always does in theater–amid the heartbreaking uncertainties and perverse humiliations of auditions. Three very different actresses beat the odds to join a production of Chekhov’s Three Sisters at a backwater Texas theater. Lisabette Cartwright (Sigrid Sutter) is a pink-cheeked newbie naive enough to dream of using art to change people’s lives. Casey Mulgraw (Sheri Lee Miller) is a bitter veteran who has wracked up 200 shows without ever being rewarded with a paycheck. And last, but definitely not least, is Holly Seabe (Danielle Cain), a surgically enhanced television star who looks fresh off the set of Sex and the City. She’s hoping to pad her resume with a serious part so she can score a movie role where she doesn’t have to take off her clothes. “Chekhov, Shakespeare–that stuff gets you respect,” Holly explains. “Then you’re a classic actress with really great breasts.”

On their way to opening night, this trio encounter a horrific array of theatrical bogeymen: egoistic directors, culturally illiterate corporate funders, arrogant theater critics, indifferent audiences, and all the other ills that modern stagecraft is heir to. There’s no missing the point. As one cruelly misused creative type puts it, “[Theater] fascinates you, it seduces you, it leaves you penniless by the side of the road.” And just to be sure we get it: “The American theater is in a shitload of trouble,” someone else explains.

But this is not a pity party. Jane Martin’s script is too good to be self-indulgent–too funny, too unpredictable, too insightful, and too evenhanded in its scorching satire of everyone in the biz. Martin’s script finds the acting skill it deserves. As Holly, Cain is the obvious standout, strutting and lisping and laying about with a razor-sharp tongue like a demonically possessed Barbie doll. But as fun as that kind of behavior is to watch, Cain doesn’t take it over the top. The actress deftly hits the more subtle notes of her character, the sadness and desperation of a woman who has been under the scalpel 17 times to achieve the natural feminine beauty required for television.

Matching her blow for blow is Miller, who brings the right mix of cynical wit and genuine pain to the role of Casey, an actress so determined to beat the cruel odds of showbiz that she’s supporting her financially fruitless artistic career by working the night shift in a slaughterhouse.

Just about every character in Anton in Show Business wants theater to do something different: provoke laughter, peer into the human soul, examine the big social issues, make actors look good, improve the community’s quality of life, and so on. And yet, even as the play presents this lengthy list of apparently irreconcilable goals, it is quietly reconciling the hell out of them by being flip and funny and humane and insightful and wildly imaginative and painfully realistic. If that’s some postmodern riddle, then it’s the kind we’d like to be puzzled by more often.