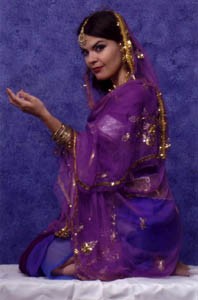 ‘A Thousand and One Arabian Nights’

Tell Us a Story

‘A Thousand and One Arabian Nights’ weaves yarns

Leslie Currier’s adaptation of the Arabian Nights, presented by Marin Shakespeare Company, opens with two armed Muslim soldiers who have captured a terrified Arab (performed with gripping presence by Scott Coopwood), whom they take for a spy. He pleads innocent; he’s a storyteller, not a spy. They hesitate to shoot him on the spot, especially since he offers to entertain them and relieve their boredom. And so the storyteller saves his life by telling stories against the dawn. He embarks upon the story of the Arabian Nights, and the play’s first story within a story begins.

Scheherezade (the enchanting and heroic Stephanie Gularte), under pretext of telling her sister Dunyazad (the sweet and brave Melissa Thompson) a bedtime tale, launches into her tales. The intricate story weaving continues, with the storyteller and his guards perched on a platform above the stage and the subjects of the initial story telling their own stories below.

Scheherezade tells the story of a poor fisherman (the genial and talented Thomas Lynch) who catches a bottle in his net and uncorks a jinni–a spirit with supernatural powers. Instead of thanking the fisherman, the jinni, furious for having been cooped up for thousands of years, announces he will kill the innocent fisherman. But the fisherman tricks the jinni back inside the bottle until it promises to reward him. The fisherman then catches marvelous fish and becomes rich and lives happily ever after.

This story is a good one, says Scheherezade, but it is nothing compared to the story of . . . and she begins another. Each time Scheherezade reaches a story’s crisis, she, her sister, and the king are interrupted by the dawn call to prayer. Each day, the king must postpone her execution to learn the story’s conclusion.

This story within a story is a classical narrative structure, and we can see why, in this production, it is so effective. Nothing grabs the attention like death, and the listeners–the audience, the guards, the king–are prisoners to its suspense. Not until years of storytelling pass and Scheherezade bears the king three sons does he finally release her from his death sentence. The action then returns to the guards and the storyteller: the guards too are transformed by the stories and release the storyteller.

The production emphasizes the fine art of storytelling. Bruce Lackovic’s set places the storyteller and guards on a high platform and the king and Scheherezade on the side by their bed. The sound producers and musician/ composer Vince Delgado and accompanying musicians sit opposite, while the middle of the stage erupts with the stories’ action. The device of showing the mechanics makes for spell-inding theater. The ensemble of superb actors, especially John Ficarra, Jonathan Gonzalez, and Susan Wilder, handle the stories’ range with ease and authority.

Much has been made of the healing effects of storytelling. Fairy tales and tales of marvels place us in a universe that for all its surprises is yet structured, full of opportunity, and controlled by an all-seeing power. The universe in the Arabian Nights tells us we must accept turns in fortune while keeping our wits.

Scheherezade, by telling an immense range of stories that include women’s infidelity as well as honorableness, cures the king by putting his marital disappointment in perspective. A sense of wonderment is the beginning of philosophy, and the more perspectives we admit, the freer we are to tolerate opinions and behaviors that diverge from our own.

But storytelling is more than a cure. People’s stories are their lives; we do not leave our mark on the world until we have told our story, and our sufferings and triumphs may as well not have occurred if they are not told to someone. Theater tells our stories for us, in great part, but we must also tell our own.