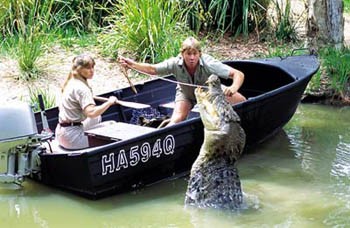 Is ‘The Crocodile Hunter’ a menace to nature–or just a waste of time?

I have precious little time on the road,” yawns author Susan Chernak McElroy, mentally preparing herself to travel from Albuquerque, N.M.–where she’s been for less than 24 hours now–to Colorado for the last few bookstore appearances in what has been an especially jam-packed publicity tour. A renowned animal advocate and bestselling nature writer (Animals as Teachers and Healers, Animals as Guides for the Soul), McElroy has been logging a lot of frequent-flyer miles to promote her newest book, Heart in the Wild: A Journey of Self-Discovery with Animals of the Wilderness. And now that it’s almost over, she’s understandably exhausted.

And just a little cranky.

“The last two weeks have been beyond brutal. I barely have any time to myself at all,” she says and with a throaty laugh adds, “so the fact that I just donated two hours of it to that movie is going to stay with me a long, long time.”

That Movie–and that’s how McElroy will refer to the film from this moment on–is The Crocodile Hunter: Collision Course, a big-screen version of the popular Animal Planet network TV show. It stars Steve Irwin, the beloved Australian zookeeper and super-manic reptile-disturber, a guy who thinks nothing of swimming with carnivorous, 300-pound amphibians or dangling venomous serpents by the tail as he faces the camera to make faces while expounding on nature’s beautiful creatures.

On the surface, one might expect McElroy to eat this guy up. After all, he loves nature, she loves nature; he appreciates the power and spirit of animals, and so does she. That’s why I invited McElroy to see That Movie in the first place.

“Don’t worry, I’m not mad at you. I’m mad at the movie,” she says. “I really question the necessity of using wild animals in film at all. Why should these animals give up their freedom and their wildness in order to be movie stars? I honestly think animals should be all digital or just not done at all. I’d like to see a movie where the disclaimer says, ‘None of the animals in this film were real because it is not respectful to animals to keep them in bondage for the sake of a movie.'”

“But the message that Steve Irwin passes along is a good one . . . isn’t it?” I ask. “Isn’t he saying that nature is worthy of respect?”

“Then he should respect it,” she replies. “I hate the fact that that guy–on his show and in That Movie–goes out and harasses animals while saying, ‘Wow! Aren’t these wonderful animals? Isn’t this exciting?’ Well, yeah, but how would he feel if some big moron came running into his house, grabbed his wife by the hair, and as she was screaming and trying to run away, says, ‘Isn’t this a beautiful babe? Just look at her! Look at her hair! Ooh! What an awesome creature!'”

For the record, McElroy does a pretty fair Steve Irwin impression.

“I don’t like people walking through my home and scaring me, walking up to my refrigerator, grabbing a glug of milk and leaving,” she continues. “That would be terrifying, and it’s terrifying for animals too.”

This, she says, is why movies like The Crocodile Hunter are more than just a waste of her time. They are, says McElroy, nothing short of dangerous, in spite of the charm and youthful enthusiasm that Steve Irwin conveys.

“When I was a little kid, I was that enthusiastic about nature too,” she says. “I raided nests. I took fledglings and raised them by myself. I found a tiny ground squirrel once that was outside its nest, and rather than let it go back in, I took it home–and it died. I had that childlike enthusiasm, and I still have it.

“But,” she says with a final chuckle, “I know enough to leave things alone now.”