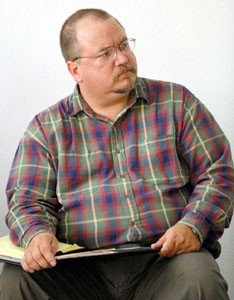 I want to apologize to each and every one of you,” Cultural Arts Council of Sonoma County executive director Jim Johnson told a group of artists Monday night. “It’s obvious I’ve done something to hurt many of you.”

Johnson, who was hired last December, issued the public apology during a meeting held by the council’s board of directors to address controversy over the organization’s management and goals. More than 40 members of the arts community attended, and many expressed concerns about recent events at the arts council.

The Santa Rosa-based arts organization built a reputation for organizing such events as the ARTrails open studio tour and First Night, an alcohol-free New Year’s Eve celebration. But lately the council has been better known for dropping programs and shedding personnel. Five board members have resigned over the past year, including wealthy philanthropist Jack Stuppin. The organization has jettisoned the unprofitable First Night celebration. Budget woes recently prompted the council to lay off two staff members who ran the acclaimed arts education program.

Finally, citing dissatisfaction with management, longtime ARTrails coordinator Elisa Baker resigned, along with administrative assistant Jane Potter. The council is now searching for replacements for every staff member except Johnson. That’s no coincidence according to Baker and other departed staff members, who describe the new executive director’s management style as autocratic. “[Johnson] admits it himself,” Baker says. “He says, ‘This is how I work.’ But we were used to a real team approach, to being treated like professionals who know what we’re doing.”

Johnson won’t comment on personnel matters. But he does admit he made mistakes. “I had a style of management that worked for me in previous jobs,” he said at Monday’s meeting. “But it’s obvious I didn’t gel with the staff here.” He says he’s trying to change the aggressive approach that has made him a lighting rod for criticism.

In a telephone interview, Johnson sighs when Baker’s name comes up. He says he was disappointed by her resignation but promises that ARTrails will continue. “This is not the first time it’s lost a coordinator,” he adds.

Baker ran ARTrails for four years, and many artists were stunned by her departure. Some have even said they’re considering severing ARTrails’ relationship with the council and going it alone.

“[Baker] is just such a great person,” says printmaker Micah Schwaberow, a 16-year ARTrails veteran. “She made the program run so smoothly.” Schwaberow and others were also dismayed by the council’s decision to lay off arts education coordinator Robert Rice and his assistant. Rice created the program, which brings artists into local schools. The 65-year-old painter, who has decades of experience in arts administration, raised $127,000 during his four-year tenure at the council.

“You have an education program headed by a person who does more fundraising than most members of the board, and you fire him,” Schwaberow says. “It’s just bizarre to me.”

But board president Ellen Draper says budget woes left the organization little choice. The grant from the California Arts Council that had funded Rice’s work was ending, and another $41,000 annual grant from the state appeared likely to fall prey to budget cuts. “It’s not just us,” Draper says. “Every arts council in the state has this problem.”

Draper does admit that her board has fumbled its fundraising duties. That’s something she’s trying to change with the help of a consultant, but she asks for patience. “You don’t become a fundraising board overnight,” Draper says.

But some critics say the board’s priorities are the real cause of its financial woes. “I think it’s a lack of energy and initiative,” Baker says. “It takes a certain kind of person to get out there and move and shake and raise money. Frankly, I think they’ve been more concerned with micromanaging. Seems to me there’s a lot of paper shuffling, a lot of trying to find out what their mission and focus is.”

The arts council’s mission is changing based on feedback from the community, according to Draper and Johnson. Draper says she’d rehire Rice if money became available. But her former employee bristles at the idea. “I would not be interested in returning under the present administration,” Rice says. “It’s just not working.”