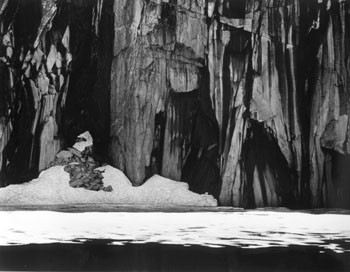 From malls to museums, the majesty of an Ansel Adams image is instantly recognizable: billowing clouds, shimmering lakes, and razor-sharp definition come together to form impressions of nature so pure in spirit that they transmit the chill of frost on a leaf or the spray of a wave breaking across a rocky coast. Ansel Adams’ work remains so loved not only because it is striking, but because it reminds us of the awe that nature inspires. Sonoma State University’s “Ansel Adams Centennial Exhibition” contains over 70 of the photographer’s original prints, including many of Adams’ best-known works as well as images from Sonoma County and Northern California.

“You could not know any photographers at all, and you’ll know some of Ansel Adams’ photographs. It is popular through the broadest range of people,” says Jim Alinder, who with his wife, Mary Street Alinder, curated the exhibit.

The Alinders are natural curators for the show. Besides being perhaps the greatest living Adams scholars, they worked closely with the photographer as assistants during the latter part of his career, from 1979 until his death in 1984. Mary Alinder edited and compiled Adams’ 1985 autobiography and later wrote Ansel Adams: A Biography, acknowledged as the definitive Ansel Adams biography.

“What we wanted to do was show who Ansel was and the journey that he made in life, as a person and an artist,” says Mary.

The exhibit includes some of Adams’ everyday personal artifacts, touches that bring us into a fuller understanding of Adams (a factor whose absence from the San Francisco MOMA’s 2001 exhibit “Ansel Adams at 100” left a vast, gaping hole).

The exhibit goes in roughly chronological order with extensive, insightful didactics at many points. Considerable space is devoted to showing the stories behind two of Adam’s most beloved masterpieces: 1927’s Monolith and 1941’s Moonrise. The Moonrise section features a copy of the negative and the only straight print Adams ever made from it. (“It took me two years to get him to make that, because he didn’t think anybody would be interested,” says Mary.) Rather than simply looking at a striking image, we are able to see Adams’ process of visualization.

In Portfolio I, according to Mary, “you can see it as the breadth of his photography. It’s not just concerned with big landscapes.” Ropelike tree roots, a Mormon temple, a ridged Saguaro cactus, and a portrait of friend and mentor Alfred Stieglitz give us a side of Adams that we may not be so familiar with, intimate compositions no less striking in their detail than his landscapes are in their grand scope.

“It’s so rare in an exhibition that you can see a whole portfolio put together, and we have two full portfolios in this exhibition,” says Mary.

Besides the panoramic and inspirational views of national parks and monuments, the “Centennial Exhibit” houses examples of Adams’ commercial work and copies of the many books Adams produced. Through these we experience Ansel the conservationist, Ansel the innovator, and Ansel the tireless worker.

What’s so compelling about Adams? “That’s a big question,” Mary says, after a pause, “and the answer’s bigger than the question. I think he reminds me of how very special this world is–that’s a simple thing to say, but how we should look at all times with fresh eyes and not take things for granted. Also, that one man or one woman can make a difference. That’s one of the things he taught me. He was a great teacher. He shared everything; he had no secrets.

“Some of his greatest pieces were things that no one else had ever done in photography. In truth, most of his great pieces wouldn’t look like that if you were standing next to him. It’s because the way Ansel decides at one point that he can manipulate reality. A lot of the things he does are not reality, but filtered through his passion.”