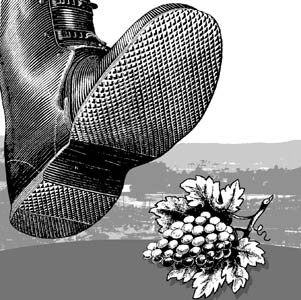 A boot camp offers a crash course from vine to wine

There are few true faux pas in today’s society. Hardly anything is off limits, and what once may have raised eyebrows–obscure fetishes, unconventional childbirth tactics–has today become lively cocktail party chatter. But tolerance has its limits, and nothing stops a cocktail party deader in its tracks than ignorance of one of the North Bay’s most precious commodities: wine.

Wine appreciators everywhere–educated or not–could take a lesson from some savvy educators operating Sebastopol-based Affairs of the Vine’s Wine Boot Camp. Part tourist-driven “wine country experience” and part genuine educational program, Wine Boot Camp whips its recruits into shape so that the once mysterious characteristics of chocolate in a Merlot or the hints of honey in a Chardonnay no longer terrify.

Soon after registering for duty, I received an e-mail from “Major” Barbara Drady, president and event mastermind of Affairs of the Vine: “Be dressed for battle: We’ve requested perfect weather for April 20.” I was instructed to bring sunscreen, a hat, and rain gear in case of rain.

On Wine Boot Camp day, I arrived at the designated meeting spot (the Safeway parking lot in Sonoma), and the training officially began.

0830 HOURS–The recruits assemble at forward command post dressed for battle in casual clothes. There is no whistle blowing or yelling, and no mandatory push-ups–just 31 recruits gathered around three vans, anxiously awaiting instruction. Once everyone has arrived, we are shuttled in appropriately red and white vans to the square in Sonoma.

0850 HOURS–Rookie recruits and wine mavens join ranks for induction, orientation, and issuance of uniforms. The attendees range from married couples to single folk, event planners to stockbrokers, young surfers to wealthy, aging yuppies. Some people are pondering a career change in the wine industry, while others received Wine Boot Camp as a gift. Drady and her officers set out heaping baskets of croissants, muffins, and juice boxes before calling “Atten-shun!” for an initial briefing. The recruits gather around Maj. Drady, a spunky, middle-aged blonde woman–a cross between a Jewish grandmother and a Girl Scout–with an unstoppable sense of humor. Plump packets containing a three-ring binder with the “Orders of the Day,” a T-shirt, and baseball cap are efficiently distributed. We are also supplied with water and a box full of healthy and not-so-healthy snacks to sustain us through the day and, I suspect, to soak up some of the wine we will be drinking.

0900 HOURS–The platoon is transported to our first mission, a vineyard and winery tour at Gundlach-Bundschu Winery conducted by Lt. Col. Towle Merritt, assistant viticulturist. The recruits are handed brown paper bags crammed with Gundlach-Bundschu goodies, and loaded onto hay-filled trucks. Once we arrive and are unloaded, Lt. Col. Merritt briefs us on the vineyard.

0940 HOURS–Lt. Col. Merritt initiates and directs the group in a vineyard exercise called “suckering.” This precise pruning ensures the proper growth of next year’s grapes while also helping the current vines to spread evenly. As much as I’m opposed to performing hard labor, I quickly refine my careless gardening skills and find suckering to be quite meditative. I suppose if I were doing tens of thousands of vines in the hot Sonoma sun, I’d feel differently, but for a brief period, I am at peace with the activity.

1045 HOURS–Field exercises were continued by Capt. Stuart Young, wine educator and tour guide extraordinaire, with a tour of the winery and 10,000-foot wine tunnel. Capt. Young eloquently explains the winemaking process and conducts a barrel tasting of several of Gundlach-Bundschu’s red wines.

1130 HOURS–Aromatic Workshop. Several long picnic tables are set up beneath a lattice wooden awning nestled among the hills. Laminated sheets, sectioned into 21 spaces with 21 small containers sit before us. The paper containers hold items like honey, strawberry jam, pineapple, cinnamon, and vanilla. Two wine glasses sit before each of us, labeled “One” and “Two.” We proceeded to taste five rounds of two wines each. First we swirl the wine (I am the first to break a glass), taking note of its clarity, brilliance, tone, and depth. Next, we inhale the aromas. Finally, we taste. Each time we perform this drill, we compare what our noses detect with the different aromas placed before us. Maj. Drady says this task will help us “make the connection” when identifying a wine’s characteristics. In no time, I am able to identify characteristics of apple, honeysuckle, apricot, and gooseberry, which has a remarkable cat-urine-like smell.

1230 HOURS–Mess hall. We gain sustenance for the afternoon by feasting on panini, asiago pasta, and homemade cookies–washing it all down with Gundlach-Bundschu 2000 Chardonnay and 2001 Gamay Noir, both from Rhinefarm Vineyards. With full bellies and a warm, fuzzy feeling, we are granted permission to hike up the knoll for a spectacular view of the Sonoma Valley before boarding the transports for the next site.

1345 HOURS–Maj. Drady has an unexpected surprise in store for us, and our convoy proceeds to a secret mission site. We pull into the driveway of Tantalus, a small artisan winery located on Sonoma’s west side. Headed up by Jim Harwood, Chris Clemens, and local KRSH 95.9 radio personality Ziggy Eschliman, award-winning Tantalus produces only 2,500 cases of ultrapremium wine annually. Ziggy, an animated dynamo, and Jim, the yin to her yang, conduct a brief tour (the winery is just a few acres) and unique winetasting. Among the wines that tickle our taste buds are a 1999 Semillon (Russian River Valley), a 1999 Syrah (Lodi), a 1997 Cabernet Sauvignon (Sonoma County), and a 1998 Cabernet Sauvignon (Sonoma County).

1500 HOURS–Maneuvers continue at Benziger Family Winery, a friendly winery that produced a 1994 Late Harvest Reisling some claim to be “better than sex.” Lt. Nathaniel Reynes, a tanned, no-nonsense man with a sizable stomach, leads us on an educational vineyard tram tour. Benziger takes care of the land above and below the surface–they also don’t use herbicides or pesticides. Our education efforts are rewarded with a winetasting, and by this point, I am feeling comfortably numb.

1600 HOURS–Participants are advanced into the rank of winemaker, guided by cellar rat Col. Terry Nolan. Nolan dishes the ins and outs of winemaking from inside one of Benziger’s barrel-filled garages. We are soon unleashed around tables with test tubes, beakers, funnels, and bottles of Benziger’s 2000 Reserve Cabernet Sauvignon, Merlot, and Petit Verdot (which Nolan refers to as the “ugly step-kid”). The mad scientist in us taking over, we mix different variations of the three reds to create individualized bottles. I finally settle on a blend of 85 percent Cab, 10 percent Merlot, and five percent Petit Verdot before labeling, corking, and sealing the bottle with melted red wax.

1715 HOURS–Tired and hungry from our exhausting day, we head to Benziger’s wine cave. Over hors d’oeuvres, we sample some predinner wines, including Kunde and Kaz. Kaz (the winemaker’s real name), a completely kicked-back wine buff, was on hand to share his wine savvy. Kaz Winery produces organic and sulfite-free wines.

1800 HOURS–Graduation ceremony. Applause breaks out as, one-by-one, we recruits are awarded our honorable discharge papers.

1815 HOURS–The evening detail is the “Taste of Sonoma Valley” dinner, featuring Sonoma Valley food and wine pairings. We all relax and revel in our wine-induced buzzes, savoring the well-earned food. Not only have we gained an invaluable amount of information during the day, I’m sure we gained a few inches to our collective waistline.

2000 HOURS–Dismissal and issuance of discharge orders. Now officially a member of the wine military elite, certified in the art of wine small talk and a master at pairing, I feel assured that any mission ahead of me will result in success. The shelves of the wine store no longer contain enemies but compatriots.