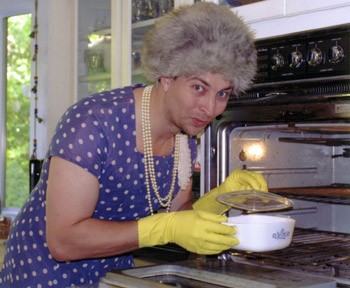 What’s in a Vagina?

Actor J. Eric Cook isn’t trying to prove anything with The Vagina Project, only that he had a hair up his ass and that he loves women. “I call it The Vagina Project because why the hell not? They called it The Vagina Monologues, and that seems to be totally acceptable,” says Cook, who wrote most of the show and performs all of it. “I think with the name, which is purposely provocative, people may think it is something that it is definitely not.”

What it is is a kaleidoscope of gods, goddesses, men, and Jewish mothers; what it is not is a feminist rant, a misogynist rant, or a garish drag show. “Being a young white guy, I know I have a pretty privileged position in the world,” Cook reflects. “But when somebody says, ‘You can’t do this,’ I tend to strike out. My way of slapping back was, ‘Well, they’ve got The Vagina Monologues, I’ll do The Vagina Project.’ I wanted to do something that honored women and yet remained true to my bastard self. So this is what came out of it. Good, silly, clean fun.”

Cook first performed The Vagina Project three years ago. “Actors Theatre was doing a whole Women’s History Month thing,” says Cook, “and it was all women all the time–which is great, and I’m all for that. But it was male-exclusive, and I said, ‘I’m gonna do something by a man that’s about women.'”

Mollie Boice (the current production’s director), wrote the poem “What’s in a Vagina?” that opens the show. Cook wrote most of the rest and wound up adding 20 minutes of new material for this revival.

What prompted Cook to bring the show back now? “I like doing it,” he says. “It’s a fun piece. It’s reverent and irreverent, [and] there are some characters that I really get a kick out of doing.”

The Vagina Project is “a one-woman-man show,” a series of monologues and stories, with Cook assuming both male and female roles. “I probably do about four women,” he says. “But it’s not in drag, I don’t do any costume changes; I just sort of assume these characters.”

Writing the characters proved to be harder than performing them. “I didn’t want to write parody characters. I wanted to write comedy, so people could walk away and go, ‘Ah!’ It’s mostly finding the truth and having it be fun and entertaining. Hopefully, they forget that it’s a guy performing.”

One of the show’s more challenging segments is “Tansy,” a monologue by Boice. “It’s a black woman who is telling a story of when her husband is lynched by the KKK,” says Cook. “As an actor, that was difficult, because you don’t want to come off as Mammy or anything. I had a couple people ask me, ‘Why did you have to do a piece about a black woman?’ It’s in there because it presents a point of view–this is my experience of what it is to be a woman, just from having a mother and girlfriends and a wife and a daughter.”

Another segment, “The New Frontier of Feminism,” recounts Cook’s real-life ordeal when he was a moderator for a teen panel and “interested community folks,” one of whom accused Cook of discriminating against men. The story then weaves in the killing of Galina Starovoitova, a prominent Russian politician and human rights advocate who was assassinated in 1998. “For every laugh, I like to give a slap across the face and keep people on guard,” Cook says. “I think [the story] encapsulates different things about the truth of being a woman in America and what you’re up against.”

“The Quicker Picker Upper” segment is Cook’s take on a Hindu myth about Durga, the goddess of universal energy, who in the monologue appears in a fur hat as the consummate Jewish mother/grandmother.

Cook, 34, has been acting since he was just out of high school. Since then, he’s been in over 100 productions. He helped start Sonoma County Repertory Theatre, where he was artistic director, and he served as associate artistic director at Actors Theatre. Currently, he’s tackling four roles in two different shows, Sylvia and The Pension Grillparzer, with Summer Repertory Theatre.

“I think it’s easier for women to cross the other side than it is for men,” Cook says. “Men could care less if women cross back and forth, but a man crossing the other way faces opposition and arms akimbo and ‘How dare you think that it’s appropriate!’ I’m not doing this on behalf of all men. I’m doing this because I think it’s interesting and stimulating, and I think it’s an important dialogue to have.”