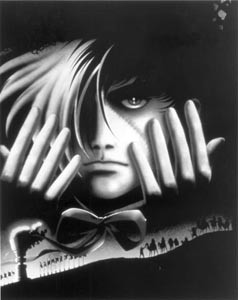 LIKE RADIOS, cars, and cameras, Japanese animation–or anime–was first imported to America because of its inexpensiveness but stayed because of its inventiveness and style. At this point, however, American children don’t seem very interested in the difference between an American cartoon and a Japanese one.

This November, the depressingly successful Pokémon: The Movie had the biggest weekend opening of any animated film in history, despite its paralyzingly dumb plot and stagnant animation. Meanwhile Miramax released Hayao Miyazaki’s superb 1997 film Princess Mononoke to more critical renown and far less loot. The most popular animated film in the history of Japan, Princess Mononoke was everything Pokémon isn’t–subtle, beautifully animated, and intelligent.

The two films–one a relentlessly marketed spinoff of a video game, the other a genuine work of art–reflect the two facets of Japanese animation. Both those facets are on display at the Rafael Film Center in San Rafael, which is hosting an impressive festival of anime from the roots up.

Opening the fest on Friday, Dec. 10, is a program of the television episodes that began the story of anime in America: episodes of the 1960s programs Astro Boy, Gigantor, and Kimba the White Lion. Introducing the cartoons will be Fred Ladd, the producer who brought the shows to the United States in the early 1960s.

Before Ladd began his fateful partnership with Astro Boy, he was a writer and animator who packaged European cartoons for America, including the full-length animated film Pinocchio in Outer Space. An NBC executive had seen an episode of Tezuka’s Tetsuan Atomu (“Mighty Atom”) on television while on a trip to Tokyo, and Ladd believes that he was called in to look at an episode on the grounds that the show, which he retitled Astro Boy, was a Pinocchio story. It’s the tale of a robot who wants to be a real boy, built by a lonely professor whose human son had been killed.

“These executives didn’t speak Japanese any more than I do,” says Ladd, speaking from his office in the San Fernando Valley. He acquired a literal translation of the episodes from which his scripts were derived.

At his appearances at the Rafael, Ladd will show his own prints, talk about the early years of anime, and discuss his relationship with the talented Osamu Tezuka. Astro Boy and Kimba were the work of the great Tezuka–called “the Walt Disney of Japan”–and Mushi studios.

Younger readers, who grew up with a Sony in their living room and a Toyota in their driveway, won’t remember how hot the memory of World War II still burned nearly 40 years ago, or how commonly the phrase “made in Japan” was used as a joke about gimcrack quality. In bringing Japanese animation to America, Ladd was building a bridge. He never could have anticipated the huge amount of traffic that bridge would one day carry.

“It wasn’t a Japanese custom to have theme songs with lyrics,” Ladd says. “They’d never contemplated it. But the theme proved popular in Japan, too.”

After Astro Boy, Ladd brought out Gigantor, a tale of a boy and his giant robot based on Mitsuteru Yokoyama’s comics.

Ladd also imported Kimba the White Lion, the first color animation made in Japan. You know the story–Kimba is a lion cub whose father dies and who tries to fill his place as king of the jungle. Just as Gigantor seems to have been the source for The Iron Giant, so Kimba seemed to spawn The Lion King. But Ladd is more amused than disgusted at the coincidences.

“There was a lot of outrage among the otaku [Japanese animation fans] when The Lion King came out,” he recalls. “I was at a screening of The Lion King, and when it came to the point of bringing the camera up the side of the cliff, I said, ‘Don’t tell me–we’re going to see his father in the clouds’ . . . and sure enough . . . the similarities are unmistakable, I think. They deny ever having seen Kimba the White Lion at Disney–so all I can do is say is good luck and wish them a nice life.”

THE RAFAEL’S program includes Kiki’s Delivery Service, a coming-of-age story starring the apprentice witch Kiki (screening Saturday, Dec. 11, at 4 p.m., and Sunday, Dec. 12 at 1:30 and 4 p.m.). The 1989 film is by director Hayao Miyazaki, who also directed Princess Mononoke and My Neighbor Totoro. Also on hand for the children is a night of Sailor Moon episodes starring the fetching, half-dressed astronaut (Friday, Dec. 19, at 5:30 and 7:45 p.m.).

There’s plenty for adults, too. The visually innovative Ghost in the Shell tells a futuristic tale of a cyborg spy weapon that develops a mind of its own (Monday, Dec. 13, at 6:45 and 9 p.m.). Cowboy Bebop (Friday, Dec. 17, at 6:45 and 9 p.m.) is a space-adventure tale set in a slummy space colony.

Cowboy Bebop is screened with the cult anime Perfect Blue, which has been compared to Silence of the Lambs by some critics. But the film’s clever tricks with narrative and the nature of reality don’t disguise its salient features. Boiled down, it’s yet another story of a half-naked chick being chased by a bulging-eyed maniac.

From the enigmas of Princess Mononoke to the highly marketable Pokémon, anime ranges from the most plot-free spinoffs of video games to serious meditations on human life. This series at the Rafael is a broad sampling, and yet it’s only an introduction.