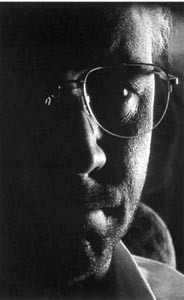 A seasoned whistle blower talks about media censorship and ‘The Insider’

Writer David Templeton takes interesting people to interesting movies in his ongoing quest for the ultimate post-film conversation. This is not a film review; rather, it’s a freewheeling discussion popular culture.

PETER PHILLIPS never watches 60 Minutes. He doesn’t read Time or Newsweek. And, contrary to what you might expect from a professional news-watcher, Phillips never watches the news. Instead, he scans the transcripts of news reports and random news programs; he pours over newspapers, absorbing “a couple hundred publications” every week.

He does not own a television. “Well, I had a TV, with satellite service, for one day,” he says with a chuckle.

The intense, soft-voiced, white-bearded Phillips is the director of Project Censored, the renowned 24-year-old program–an offshoot of the Sociology Department at Sonoma State University–that monitors news and news services, producing a best-selling annual compendium of important stories ignored, often for dubious reasons, by the mainstream media.

Of his aforementioned one-day perusal of the major news programs, Phillips has this to say: “It was nothing but garbage. All day long. Then there was a MSNBC special on Hitler. Then they started comparing Hitler to Milosevic–and that just pissed me off. That’s simple-minded NATO propaganda. It’s bullshit.

“I haven’t watched TV since.”

He takes a breather to get another cup of tea. When he returns, sliding his mug onto the scarred coffeehouse table, Phillips–who looks a little like Santa Claus, only edgier–smiles broadly. “So what were we talking about?”

Well, we were talking about 60 Minutes. And before that, we were talking about The Insider. A new Disney film starring Al Pacino as former 60 Minutes producer Lowell Bergman and Christopher Plummer as the intimidating reporter Mike Wallace, The Insider tells the sordid, engrossing true story of Jeffrey Wigand, a reluctantly heroic tobacco company insider who lost everything–and suffered numerous death threats–when he agreed to speak to Wallace on camera about his employer’s misdeeds.

After Wigand’s segment was filmed, the network buckled under in the face of a lawsuit threatened by the tobacco company that Wigand had worked for. After a bitter fight–in which Bergman, who shortly thereafter left the network, resorted to leaking his story to the New York Times–the segment was finally aired.

But 60 Minutes’ reputation had been forever soiled.

IRONICALLY, it was the story of how 60 Minutes sat on Wigand’s interview that was widely reported, while the substance of that interview–that tobacco companies had been deliberately engineering cigarettes to be more and more addictive–was downplayed.

“Unfortunately, it says too little about a big problem,” he shrugs. “The Insider is saying that there are still good journalists out there, and that is true. There are good journalists, firm believers in the First Amendment. And they are increasingly bent and pushed around by Big Media.

“And it’s true, it’s all true,” Philips continues. “But the problem is far worse than that. At the end of the movie, 60 Minutes has fixed its problem, they’ve come clean, they’ve run the story–only now they’re a little bit bent.”

The truth, according to Phillips, is that 60 Minutes was always bent–along with every U.S. mainstream newspaper and news organization. “It’s been said before,” says Phillips. “We are the best-entertained, least informed society on the planet.”

As an example, he mentions the inordinate attention given to the O.J. trial–and the stifling effect it had on other, more vital journalistic endeavors.

“Eighty-three column feet were devoted to O.J. in the Los Angeles Times the year of the trial,” Phillips divulges. “Why didn’t they write about how Chevron hired the helicopters that flew toward the Nigerian oil platforms, guns blazing, killing the student demonstrators?”

The powers that be, obviously, felt we’d rather hear about the private life of Kato Kaelin.

“These people who are supposed to be exposing the system are actually supporting the system,” Phillips concludes. “When you get as wealthy as Mike Wallace, when your contract is paying you millions a year, you can’t help but feel a little beholden to the powers that be.

“Because, guess what? You’re part of it now.”