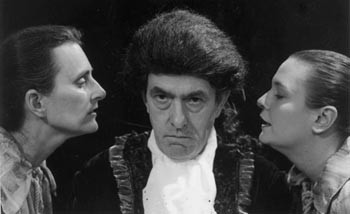 CURSE the ephemeral nature of live theater! Though it will be gone from the stage in just a few weeks, Sonoma County Repertory’s production of playwright Peter Shaffer’s Amadeus should be bottled and shared with the generations.

As a young man, Salieri (John Moran) wants nothing more than to be a composer and eventually finds patronage with Emperor Joseph II (played here by a comically superb Gerald Haston). But when the vainglorious Mozart (Ben Stowe) sashays into the Viennese court, the maestro’s perspective sours. As he recounts, “Was it so early that I began to have thoughts of murder?”

In a profound turn in his career on local stages, Moran offers a pitch- perfect portrayal of the court composer–a man whose artistic envy is so dark that he launches a one-man hate campaign against God.

To say Moran does his usual laudable best here would be an insult to this performance. For the duration of this show, the man simply is Salieri in all his wit, whimsy, and wretchedness. Moran’s performance of the famed “mediocrity” speech is both exquisite and harrowing as the character realizes that his work, unlike Mozart’s, was of its time, but not timeless.

Fans of the Academy Award-winning film version of Shaffer’s play may liken some of Stowe’s stage-borne antics to those originated by actor Tom Hulce (namely, the signature giggle), but the young actor is ultimately successful in finding his own voice for Shaffer’s text.

Though its length may have playgoers of lesser stamina hearing lullabies, in the end, SCR’s Amadeus is music to the ears.

THE SANTA ROSA PLAYERS’ production of the gender-bending chestnut La Cage aux Folles isn’t all a drag. Directed by Bob Rom, this saucy send-up of sugar and spice and all things vice is set at a French cabaret famed for its female impersonators.

Alpha-she-male Albin (Vance Smallwood), all mascara and moxie, turns in the performance of his life posing as the mother of his gay lover’s grown son when the young man brings home his conservative future father-in-law.

An avalanche of mini-disasters ensues (both in the plot and onstage), but the show makes up for its lack of polish with a handful of rousing song-and-dance numbers. Thank its gaggle of Gagelles (the faux broad-squad that works as sort of a Greek chorus throughout the show). The energy these boys muster is simply atomic.

Though their va-va-voom isn’t always the pinnacle of grace–some of the femmed-up fellas look like piano movers despite their clean-shaven bodies–they invariably land on their feet. At times one may wish this production was simply a revue of its estimable musical portion, since many of the acted segues are ham-handed or even inaudible. But the cast excels with the acrobatic dance routines cooked up by choreographer Anthony Gianchetta and can carry a tune when backed by the tight five-piece orchestra led by talented young keyboardist Paul Stroba.

Like La Cage‘s signature tune, “We Are What We Are,” this production is what it is–a light, frivolous spectacle.