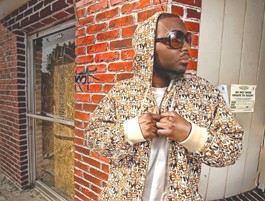 Can Cavity put Santa Rosa back on the hip-hop map?

Cavity is a 27-year-old rapper from Santa Rosa who’s just lost his job (outsourced overseas) and who’s using his free time to hit the studio and realize a childhood dream. Growing up, Cavity ingested cassettes by Rakim, N.W.A. and Mac Dre, but none had quite the impact as Forever Hustlin’, by Ray Luv. Still the best-known rap album from Santa Rosa, it changed Cavity’s perspective about what could be accomplished in a city considered too white and too safe for serious hip-hop, and the earnest rapper still talks about how his hometown can be taken seriously once more.

“We need a major artist to open the door for us again, ’cause I believe the door is closed and it’s locked right now,” he says. “When we measure up against Oakland or San Francisco, Richmond or other cities, they lookin’ at us as if we’re from cowtown. We’re in the country. We’re irrelevant. Lots of people don’t even consider us the Bay to begin with.”

Never mind that Sonoma County has always been a massively supportive region for hip-hop artists from the Bay Area. This is a place where Andre Nickatina can play every month, where two years’ worth of Super Hyphy shows almost always sold out when no other city in the Bay Area was consistently supporting live hip-hop, and yet it’s also a place where our homegrown rap artists are underrepresented in an all-too-common form of suburban hypermetropia.

Cavity aims to flip the script back to Santa Rosa, the way Ray Luv did, with his upcoming album If the Lord Say the Same. If “We Ride,” “Nutron” and “I’m with It” are any indicators, he’ll do it with bona fide party anthems—although Cavity sets down the Patrón for four personal minutes with the honest, emotional “In My Life.” (“I just kinda let my soul bleed, you know what I mean?” he explains. “Frustration. That’s what that song is.”)

This weekend, Cavity plays a huge show in Santa Rosa with E-40, the “Ambassador of the Bay” who brought the hyphy craze to the rest of the country before its quick demise. Bay Area hip-hop has proven its versatility in the past; Cavity sees no reason it can’t rise again. “Hip-hop moves with new sound,” he assures. “The Bay is very creative. Trendsetters. We’re just looking for that new sound.”