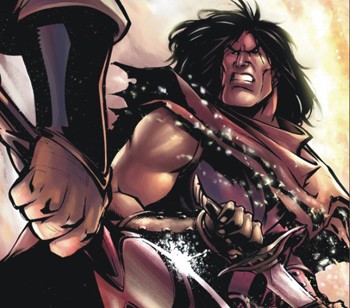 Sheba: Raised by a saber-toothed cat, Rakan has the qualities of peace and wisdom that mark a great warrior, even in comic books. You can see it in his face.

A new quartet of superheroes steps up to fight evil. Their turf? The Middle East.

Jalila acquired her superpowers at the age of 16, after she was exposed to a nuclear blast at the end of the 55-Year War. She spends her days fighting against the United Liberation Force and the Zios Army, wearing a black leather halter top and tight-fitting pants. Jalila kicks ass to protect her home–the City of All Faiths–from those who wish to control it.

Meanwhile, Zein is heir to an ancient Egyptian king, and though he’s a respected university professor by day, he is a crime-fighting machine with superhuman powers at night.

These are two of four superheroes who populate the world of AK Comics, based in Cairo and distributed in the Middle East and the United States. Creator Ayman Kandeel, who, like his creation Zein, is a university professor of economics in Cairo, began the series in 2002. Published in both English and Arabic, the series touts its characters as “the only Middle Eastern superheroes.”

“I grew up reading all sorts of comic books and novels. As a kid, I was impressed by ancient Egyptian history and wonders,” says Kandeel. “I always imagined a superhero with ancient Egyptian roots, with all the mystery and mysticism that civilization embodies.”

Stepping away from the comic-book world, the real world continues to deal with a very real war in Iraq, which has focused a laser beam of negative propaganda on Middle Eastern cultures, often lumping countries together into one homogenous, warlike Islamic mass by misrepresentation. AK Comics promotes a very opposite picture. All four main characters in the series are working on behalf of peace.

Let’s not forget Aya, the Princess of Darkness, who not only works for an elite crime-fighting organization in the Middle East, but is trained as a lawyer, fighting for justice and gender equality.

“Aya was designed to confirm the gender-equality issue that is still somewhat sensitive in the Middle East. Since she has no superpowers of her own, it was by choice rather than obligation that she fends off evil,” says Kandeel.

And finally there is Rakan, the Lone Warrior, raised by a saber-toothed cat, who wanders the deserts of Arabia and Persia, using the techniques of “sheba” (wisdom and peace) that make him an invincible warrior.

Kandeel says that “Rakan was created to satisfy those adventure and fantasy addicts with a mystic twist, offering the kinds of thrills that Medieval East/Persia can offer. He embodies the strong, persevering and unrelenting nature of the warriors of that era.”

The comics are based on U.S. standards, meaning one will find the standard burlesque, sexy women; the familiar diabolically muscled villains; and heroes cavorting against gothic backdrops. Even the fight scenes are punctuated with the trusty Bam! or Krack! that have been employed by comic books for decades. The creative teams behind each series are a mix of Western and Middle Eastern talent.

Marwan el-Nashar, AK Comics’ managing director, notes that the artwork differs from classic comic-book style. “We are trying to adapt a unique individual style that can stand out from the rest. You will notice that the art features of our characters are quite realistic and more ‘mature’ than your average Marvel or DC Comics. The characters and story line are our genuine creation. They tend to blend reality and actual events in a storytelling style. Moreover, we use altered names of Middle Eastern cities, monuments and so on. The futuristic era our heroes reside in creates a wonderful ‘brave new world’ atmosphere.”

This apocalyptic atmosphere draws upon the Middle East’s real, cumulative history of conflict, providing weighty story lines for these first-of-their-kind comics, and then stretches off into the fantastic. Three of the characters (all but Rakan) live in a time after the “55-Year War,” which culminated in a massive nuclear explosion, a situation that can give a nonfictional shiver to any reader in today’s political climate.

One gets a sense that for Kandeel, these characters are more than just drawings and words on colorful pages. They are also symbolic of the possibilities for transformation of the Middle East, drawing on Kandeel’s own powerful fascination of Middle Eastern mysticism and the very real conflicts that exist in the region today.

“When it comes to the global market, there’s much attention, curiosity and controversy about this troubled region,” says Kandeel, “and there’s a serious attempt to better understand and relate to issues that face the Middle East. Hence, we can capture a small portion of that attention.”

Reception to the comics in the United States has been tremendous, according to el-Nashar. “We released four issues just to test the U.S. market. Sales averaged 4,500 copies per issue. Currently, we do only direct sales and subscriptions via our partner in L.A,” he says.

The comics are also excellent sellers in Kandeel’s home country of Egypt, with interest beginning in other countries of the region.

“We’ve been approved by the Ministry of Education to conduct presentations in schools. We now have several key accounts such as Egypt Air, the American University in Cairo, several cultural centers and bookstores. Our rate of growth is just superb,” el-Nashar says.

Despite el-Nashar’s optimism, AK Comics faces some barriers in reaching a wider Middle Eastern audience. Religion is not discussed in the plot lines, and political strife is referred to vaguely, or cloaked in abstract references. For the Middle Eastern version, Jalila’s outfit was modified for a more conservative audience. On getting into the Saudi market, el-Nashar was quoted in Lebanon’s Daily Star as saying, “We’re trying to negotiate with the Saudis to see if censorship can be avoided. Hopefully, they are getting more liberal.”

In the United States, the comics debuted last year at the king of comic-book conventions, ComiCon in San Diego, with encouraging results, according to el-Nashar. The company will return for ComiCon 2005, and begin a larger U.S. distribution after that.

“In a sense, our comics are borderless, with a vision of a globe void of wars and conflicts. Clearly, our heroes promote peace and prosperity, protecting the weak and the needy in the most volatile region of the world,” says Kandeel. “We believe there is a global human need to have superheroes around. This is true of all histories and mythologies, and is quite evident by the recent trend in big blockbuster movies. It’s important for individuals to have faith in someone greater, physically and morally, than themselves.

“We in the Middle East are desperate for such individuals that we can identify with.”