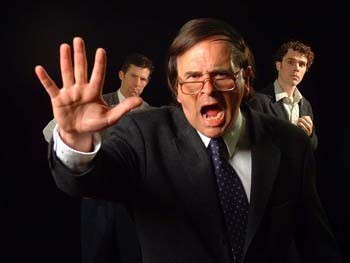 “The hardest thing for me, working with this company, is to describe to people what we do,” says Word for Word cofounder Susan Harloe. “Until people see it, they have no idea what¹s coming.”

For nine years now, Harloe and Word for Word have been performing literary theater in a completely revolutionary fashion: down to the very letter, completely raw and totally uncut.

Rather than editing the dialogue and adapting the stage directions from the plot of a well-thumbed work, the narrative structure of a Word for Word production is based precisely on the text. Each word of the author’s original version is cleverly broken up among Word for Word’s virtuosic company of actors. While actual quotes remain firmly in the mouths of their assigned characters, the rest of the text flows between performers in surprising sonic and dramatic patterns. “You really have to have your chops,” says Harloe. “We are literally finishing each other’s sentences onstage. We are kind of one big mind.”

Where did the genesis for this radical form of literary presentation come from? While other companies in Seattle and New York have experimented with literal adaptation, the art form has truly found its home in San Francisco with Harloe’s group, which perform short stories by Tobias Wolff on Jan. 29 at the Dance Palace in Pt. Reyes Station and Feb. 22 at Sonoma State University. “I am a purist,” admits Harloe unabashedly. “I was also a librarian for many years. This was an interesting way to combine my dual careers.”

While not shying away from presenting portions of larger works like Upton Sinclair’s Oil or John Steinbeck’s Cannery Row, Word for Word have found their niche performing short stories. By preserving the short story intact, Harloe believes that the beauty of the form is revealed. “The thing about a short story is that it is very satisfying,” she says. “It has a revolution. It completes, and the audience gets a sense of completion from it.”

Short stories are also the repository of some particularly fine literary phrasing. “A short story is a very particular form of literature,” says Harloe. “I believe that authors craft it very carefully. The choice of words on a page is very specific. Someone like Tobias Wolff is a good example of this process. He will write a single sentence five or six times.”

The languid and slightly melancholy literary world of Wolff is indeed a perfect place for Word for Word to explore the beauty of the printed word. A modern master of the short story, the author of This Boy’s Life seems to specialize in detailing the burden of choices unmade. Especially in his short stories, even the smallest of events might profoundly alter the lives of the protagonists. The two selections that Word for Word present, “In the Garden of the North American Martyrs” and “Bullet in the Brain,” follow this theme.

By preserving the delicate emotions and words of Wolff’s stories and bringing them to the stage unadulterated and unabridged, Word for Word have retained the facet of literature so often discarded through adaptation: the author’s voice. It’s all part of fulfilling its stated goal: “to tell good stories with simple and elegant theatricality and amaze audiences with language.”