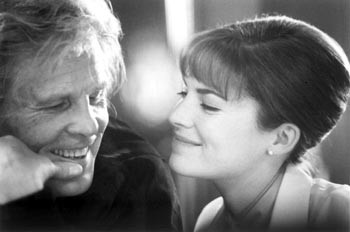 Love on the rocks in flinty ‘Afterglow’

ALAN RUDOLPH’S Afterglow begins as a bad farce and ends with an animal wail of grief. However, Nick Nolte’s almost pornographic single-entendres in the first half are enough to send a portion of the audience to the exit doors before Afterglow comes alive.

Nolte plays Lucky Mann, the promiscuous handyman who comes to fix the pipes and tend the lonely women who call for him, wanting “to get Lucky.” His neglected wife, Phyllis (Julie Christie), a former actress, lolls around in a penumbra of sorrow, watching and rewatching tapes of the cheesy horror movies in which she used to star.

Across town, there’s more trouble: Marianne Byron (Lara Flynn Boyle) is married to a career-obsessed husband, Jeffrey (Jonny Lee Miller), who won’t touch her, either because of job worries or because of a passive refusal to give her the child she’s pleading for.

Marianne decides to start the process on her own by remodeling a study into a nursery; of course, she needs a handyman for the job. Meanwhile, Jeffrey has been actively checking out older women and encounters Phyllis, who has been spying on her wandering husband.

Afterglow takes place in a crypto-French metropolis; it isn’t until halfway through that we peg the location as Montreal. French phrases and music set the tone for would-be sophisticated dialogue. A sample interchange: Phyllis supposes that Jeffrey has “a mother thing,” and Jeffrey replies that “Mother wouldn’t approve of this.”

This sort of chat doesn’t recall ’30s director Ernst Lubitsch so much as it does all of the brittle hacks who tried hopelessly to imitate Lubitsch’s delicate touch.

When Nolte, with his shaggy, leonine head, finally shows his capacity for anger, we start to take both him and Afterglow seriously. Though Lucky is introduced with a sight gag of a crescent wrench held between his legs at a 15-degree angle, he starts to evolve into more than a rotting old joke of a stud.

And it isn’t until the second half that we realize that director/writer Rudolph not only isn’t critiquing Lucky, but also isn’t just blindly endorsing Marianne’s plan to get a baby by any means possible. (I should have given Rudolph the benefit of the doubt, but one sees so much irresponsible, merry crap in the movies about what a magic fix motherhood is.)

No one can make movies that are such a combination of the fluffy and pungent as Rudolph. Afterglow is his 15th film (Welcome to L.A. and Choose Me most memorably) in a career that has always contrasted the facetious and the mordant: He made a serious attempt to film Gary Larson’s cartoon The Far Side as well as a biography of the unhappy Dorothy Parker.

Afterglow starts out on the wrong foot, but it’s not sloppy. The compositional qualities are strong throughout (especially one smart segue from the gothic towers of Montreal to the horror film Phyllis is watching), and Nolte and Christie are both finer than they’ve been in years, particularly in the stunning finale.

Afterglow offers a prime example of why it’s sometimes unwise to walk out on a film.