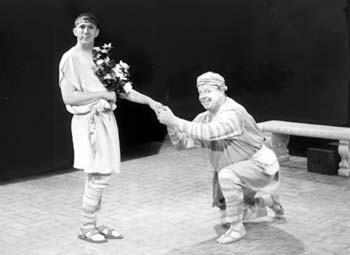 A Funny Thing Happened on the Way to the Forum

Nothing funny happens at the “Forum”

THIS IS A cruelty-free review. Sonoma County Rep-Santa Rosa’s production of Stephen Sondheim’s infernal musical fantasia A Funny Thing Happened on the Way to the Forum was not harmed in the creation of this article because on opening night it had been mysteriously replaced by an inferior copy. It looked like SCR, but it wasn’t, and eerily, nothing funny happened.

Staging a featherweight sex farce to usher in spring seems a natural choice, but the musical, as written, is more baroque than burlesque.Whistles accompany kicks in the ass and pratfalls a-go-go collide with tired puns like “religious cretin” (referring to the pious folks of nearby Crete).

This show is a golem. Despite Haston’s gallant efforts to breath life into it, he is left winded, overcome by the show’s own drafty antics. His Pseudolus hails from the Lou Costello school of rubes and is conveyed with much gusto–yet one can’t help but think that the effort is misspent. Haston is a proven comedic actor, but this role wastes his finer faculties. Instead, he plays a cartoon.

Likewise, Proschold’s serviceably doltish Hero is well complemented by Davis’ sugary Philia, but ultimately the roles seem unworthy of both their talents, and consequently the actors seem rather “outside” the piece.

Jonathan Graham’s Hysterium (head slave) and Tim Hayes’ Marcus Lycus (the hard-nosed flesh peddler), however, appear rooted in the world of the work. This is a credit as much to their acting as to their willingness to submit to oppression.

As the Proteans (transmutable onstage personnel who go from eunuchs to guardsmen), zealous young performers Derek Fischer and Greg Gallagher make a concerted effort to steal the show, though they forfeit what little booty there is with their sledgehammer-subtle stage presence.

Nina Raggio’s choreography during the courtesan dance sequence is a bizarre fusion of I Dream of Jeannie and the weirdo physical seductions found in the mid-’60s James Bond flicks. Neither particularly sexy or comic, the outcome can only be construed as an experimental ode to the ultramodern.

On balance, A Funny Thing Happened on the Way to the Forum is far from a feast but not quite a beggar’s banquet.