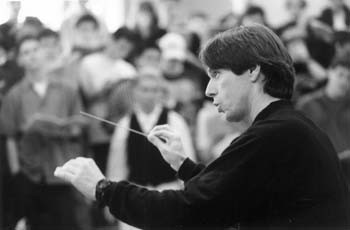 Sticking to it: Sonoma County Bach Choir director Bob Worth prepares his group of nearly 70 singers for the upcoming performance of Benjamin Britten’s War Requiem, mounted in collaboration with the Santa Rosa Symphony and others.

Worth demonstrates in his own voice. The chorus–a combined multigenerational force comprised of the award-winning Sonoma County Bach Choir, which Worth directs, and the Santa Rosa High School chorus, under the direction of Dan Earl–attentively listens, watching and nodding.

For months this mixed group of performers has been learning the intricate music of British composer Benjamin Britten’s War Requiem, a legendary and infamously difficult work that merges the traditional requiem mass with the stunning World War I poetry of Wilfred Owens. Composed in 1962, the War Requiem was commissioned for the opening of the newly rebuilt Coventry Cathedral, severely damaged by falling bombs in World War II. (Britten fought to maintain conscientious-objector status during that conflict.)

When the piece is performed in Santa Rosa in mid-April, the chorus will join a company that includes the Santa Rosa Symphony, the Santa Rosa children’s chorus, and a trio of renowned soloists: baritone Thomas Quasthoff, tenor Richard Clement, and soprano Janice Chandler. Under the baton of conductor Jeffrey Kahane, the complete ensemble will number over 250.

He raises his baton. At his signal, the chorus repeats the all-important passage. “Agnus dei, qui tollis peccata mundi, dona eis requiem.” Lamb of God, that takest away the sins of the world, grant them rest. This time, the fear is audible. A tense, shivering dread, a sense of hushed white-knuckled terror that sends a chill shiver right up the spine, forms an ironic counterpoint to the fervent hopefulness of the ancient Latin words.

“There’s going to be a big honking orchestra in front of us during the live performances,” he reminds them. “We’ll have to sing very clearly and powerfully to keep from being swallowed up.” Later in the evening’s rehearsal–after practicing another passage, this one even more technically difficult–someone on the risers gasps, “It’s so hard!”

Worth grins. “Of course it’s hard. The War Requiem has some of the hardest passages I’ve ever done in my life. That’s what performing the requiem is all about.

“Just wait till next week,” he adds. “When all the singers and musicians are in one place next week, and we do this thing all together, when you feel the audience responding to the music, you’ll know exactly why we’ve been working so hard for so long. Believe me, it will be worth it.”

FOR ANY ORCHESTRA this is a massive project,” says Jeffrey Kahane. “For an orchestra like the Santa Rosa orchestra, well, there are people who thought I was crazy to even attempt it, just because of the sheer scope of the work.”

Kahane, who has played piano in past productions of the War Requiem, will be conducting Britten’s masterpiece work for the very first time.

“Britten was one of our greatest composers,” Kahane says, “but he was also a man of the theater. His greatest music involves words and music that have a tremendous visceral visual impact. This is a piece that is conceived very much in terms of its physical space. Wait till you see the whole thing assembled onstage. Oh my God! It’s quite an astounding thing to witness.”

The logistics would terrify anyone. In addition to the complexity of the frequently thrilling, often onomatopoetic, score, Britten provided detailed instructions for how the performers were to be arranged. There is a specific symbolism at work in all of the composer’s demands. The children’s chorus, which must sing from a separate portion of the room than the orchestra and main chorus, stands as a symbol of innocence and purity.

The male soloists, representing the soldiers, one British, one German, sing the poetry of Wilfred Owen, separately and together, but always with the chamber orchestra, 12 musicians intentionally placed apart from the main orchestra.

“The male soloists personalize the piece,” Kahane says. “They make very intimate and direct the experience of the soldier on the battlefield.”

The chorus, which sings the requiem mass in Latin, is joined by a female soprano soloist, who, according to Kahane, represents the angels and divine nature. This juxtaposition of the ancient and imposing words of the mass with Owen’s vivid poetry, literally written on the battlefield during World War I, conveys a provocative sense of irony as the comforting simplicity of the mass is repeatedly answered by the dying soldiers’ cries of anguish and bewilderment.

For Kahane, Worth, and the entire company, Britten’s intentional ironies have been compounded by current events. It is ironic, certainly, to be singing the words of Owens–who died on the battlefield in “the war to end all wars”–as, simultaneously, atrocities are being committed and bombs are being dropped on the other side of the planet.

“We’ve been thinking about Kosovo a lot over the last few weeks,” Kahane admits. “Whatever each person’s specific belief about what NATO is doing, we all agree it’s a horrifying spectacle.”

Kahane, whose family fled Europe as refugees during World War II, first conceived of doing the War Requiem three years ago, when the war in Bosnia was raging.

“I’ve done a lot of thinking about the First World War,” he says. “It’s become clear to me that if there is any hope of our preventing such things from happening again in the future, we absolutely have to understand what led to them happening in the first place.”

Kahane believes that the War Requiem is an especially powerful bridge to understanding war.

“I think the War Requiem does two things,” he says. “It allows for a very deeply personal experience of the emotions that are associated with war–the fear, the grief, the horror, the shock, the bitterness, the pain–all those things. And it also provides an incredible catharsis. Owens’ poem, the final poem, when the two soldiers meet after death and one says to the other, ‘I am the enemy you killed, my friend,’ and then, ‘Let us sleep now,’ that is the moment when all of the forces join together–the children, the small orchestra, the large orchestra, the soloists, and the chorus–and then there’s this final prayer, which I believe is one of the most cathartic moments in all of music. ‘Requiescant in pace. Amen.’ “

May they rest in peace. Amen.

“Something I told the chorus,” Kahane concludes, “[is that] many of them, and certainly the orchestra and especially the audience, will not even realize the impact or the significance until the end of the performance–and after. That’s what this remarkable piece does.”