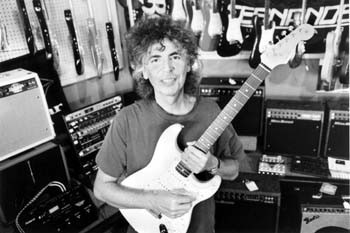 WE’RE GONNA make a T-shirt here that will say: ‘Zone Music–Run and Overrun by Musicians,’ ” says Frank Hayhurst with his tongue planted firmly in cheek. “That pretty much sums it up.”

Indeed, Hayhurst’s Cotati musical instrument store and recording studio have long been regarded as one of the most musician-friendly businesses in the county. That amiability extends to Hayhurst’s brainchild Musicians Helping Musicians, a non-profit charitable organization that helps defray medical costs and other expenses incurred by often uninsured players or their families. In the past four years, the organization has raised nearly $90,000 through benefit concerts and auctions.

It’s a cause close to Hayhurst’s heart.

A few weeks ago, Hayhurst learned that longtime Zone Music vice president Randy Quan–a Santa Rosa guitarist who has toured with the likes of soul legend Booker T. & the MGs–was stricken by a rare inoperable cancer that will require extensive radiation treatment and chemotherapy that may diminish his sight and hearing. While Quan’s medical expenses are covered by health insurance, Musicians Helping Musicians will stage a benefit concert on Sunday, April 11, to offset his living costs during the months he will be recuperating.

Among those scheduled to perform at the shows are Huey Lewis & the News guitarist Chris Hayes, Steve Kimock of the Other Ones, Michael Bolivar, Terry Haggerty, John Allair, Sarah Baker, Stu Blank, Danny Sorentino, and host of others.

Hayhurst founded Musicians Helping Musicians in 1994 when the uninsured wives of two local musicians–both close friends of Hayhurst’s–were diagnosed with breast cancer. In response, the music store owner organized a pair of all-day benefit concerts at the Tradewinds and the Inn of the Beginning, two downtown Cotati nightclubs.

Hayhurst and a horde of musicians–including L.A. rock guitar demigod Michael Lee Ferkins–returned to those venues the following year for a performance benefiting accident victims Bruce Day, former bassist for Pablo Cruise, and Jahn-Erik Jacobsen, a Harmony School student and son of keyboardist and technician Jack Jacobsen, a member of the Huey Lewis & the News road crew.

Ultimately, Hayhurst envisions a non-profit collective that will offer musicians a wide range of professional services. “My idea is to get 200 to 300 musicians, though I also include in this category all edge dwellers who are involved in the arts, and as a pool collectively buy health insurance and then make it affordable to those least able to afford it, by holding quarterly benefits to subsidize costs,” he says.

Production services and equipment for the upcoming benefit concerts will be donated by Zone Music, local nightclub owners and staff, and local musicians and technical staff.

“For some reason,” Hayhurst says, “people really do love music. Everyone is very compassionate and receptive to this idea.”

Zone Love IV, benefiting Randy Quan, will be held Sunday, April 11, from 6 to 11:30 p.m. at the Tradewinds and the Inn of the Beginning in downtown Cotati. Admission to both venues is $10. Additional donations can be made to the Randy Quan Trust at any Exchange Bank, or at Zone Music, 7884 Old Redwood Hwy., Cotati.