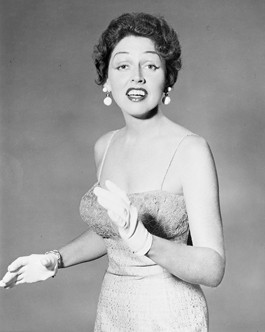 Anita O'Day gets her due in a new documentary

The good news is that not every scandalous life is short. Anita O’Day, billed as the “Jezebel of Jazz,” made it almost to 90. Robbie Cavolina and Ian McCrudden’s documentary Anita O’Day: The Life of a Jazz Singer charts the staying power of an irreplaceable musician. What they give us proves more interesting than the old story of four months in jail for marijuana possession, 16 years of junk addiction.

“It’s a thing that went down,” was the woman’s favorite conversation ender. O’Day uses the sentence rather politely with her interviewers here (one of whom, Cavolina, was once her manager). Nothing sums up the vicissitudes of O’Day’s life as much as her motto, “All you can do in this world is be a good loser.”

Jazz critic Leonard Feather is interviewed on the subject of what makes a jazz vocalist great. He identifies four things: timbre, phrasing, choice of accompanists and material. The arranger Russell Garcia adds that a vocalist has to add meaning; she has to be “an actress.” Anita O’Day demonstrates how O’Day possessed all five qualities. The documentary excerpts 40 songs, and yet none seems stinted or clipped off.

The forwardness of this singer surprises you at once. She was slight and curly and sad-eyed, like Piaf, only with a great, pouty lower lip. She pours her heavyweight chemistry into a duet with the African-American trumpeter Roy Eldridge, teasing out a call and response. Eldridge exclaims, “An-nee-ta, I feel somethin’!” It’s a commercial for miscegenation, “uptown” being code for Harlem. O’Day was one of the few white performers to play the Apollo.

Eldridge and the wild Krupa soon felt upstaged, and O’Day headed for more restrained work with Stan Kenton. The lack of party-hearties in Kenton’s band cooled O’Day’s enthusiasm, but there she caused a noteworthy gender breakthrough, insisting on a band uniform instead of the usual feathers of a big-band canary. It was obviously a nightmare to keep those gowns clean and pressed during the brutal tour schedule; she preferred to sing togged out in a suit and a skirt.

Later, in smaller groups, O’Day was an innovative bebopper. One of the many priceless TV kinescopes here features O’Day with an unidentified trio. (It’s one small lapse of the film’s otherwise excellent job of crediting musicians and sources.) Zutty Singleton is on drums, but who are the guitarist and the pianist who help O’Day deconstruct “Body and Soul”? Her asides to the audience (“This is a party”) are just part of the unique phrasing.

The Verve years—17 albums recorded from 1955 to 1964—are represented in her famous vamp on Fats Waller’s “Honeysuckle Rose.” The frenetic “Tea for Two,” recorded at a Swedish concert, has quotes—samplings, if you will—of “Hungarian Rhapsody” and “Stardust.” O’Day’s “Tea for Two” is jazz at its most arduous, reflecting the American mania for velocity. She tears up this seriously insipid song; it’s like a race for cool as it shifted elsewhere, maybe, a message to the rising rockers that they weren’t as fast as they thought they were.

These performances lead to the most famous one: Newport in 1958, where the freckly singer is squinting in the sun under a cartwheel hat. A long passage from Bert Stern and Aram Avakian’s color film Jazz on a Summer’s Day illustrates how O’Day renovated the ancient Dixieland tune “Sweet Georgia Brown.” First, she turned it into a beatnik recitative, and later sailed it away into the ether. There were 150 musicians at that particular festival, one of the most mass-culture moments jazz ever had. In old age, O’Day still called the performance “the Big Event.”

O’Day describes how she detoxed by herself on a Hawaiian beach. Then came a stint living in a trailer in Hemet and a bungled hospital stay for a minor complaint that left her throat irretrievably burned. Miraculously, O’Day was still singing and recording up to the end, even with nothing much but the phrasing left.

O’Day was a musician’s musician. Though she has heavyweight fans—Margaret Whiting, Hedwig‘s John Cameron Mitchell, and singer and Robert Altman confederate Annie Ross (all interviewed)—the rediscovery of O’Day is still waiting. It’s a thing that needs to go down.