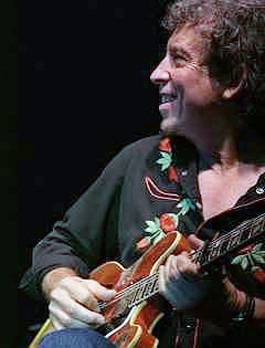 Everything that’s ever happened in life has surprised me.”

Elvin Bishop’s offhand observation summarizes a theme that has bubbled up more than once in our genial conversation—a bemused appreciation of the good fortune that has characterized his lengthy, if improbable, musical career.

“I’ve been lucky,” Bishop says. “I started out when I was maybe 14 listening to John Lee Hooker in my room in Tulsa, Okla.—before Civil Rights in a segregated society down there—and the odds that I would ever end up being good friends with him and getting a chance to play with him musta been tremendously low.” He pauses, as if digesting this good fortune anew. “But it happened.”

Bishop was just a few years older when he used a National Merit Scholarship to carry him from Tulsa to Chicago. “By that time, I’d figured out that that’s where the blues was happening, and the school was kinda my cover story.” He quickly befriended some of the black cafeteria workers on campus “and within a week, I was going down with them to see Muddy Waters and Magic Sam and people like that.”

Thrilled but not intimidated, he also sought out opportunities to play with the older bluesmen, even though Bishop says now that he scarcely knew what he was doing.

“I’d been trying. I loved blues and I loved the guitar, but there was nobody musical in my family, nobody in the neighborhood. You couldn’t really hang out with black people, and they’re the only ones who knew how to play blues in Oklahoma,” he recalls. “It was pretty slow going until I got to Chicago.”

Once there, he says, “I just introduced myself to the guys, and they were really much nicer than they had to be, ’cause I was nobody.” And thus the cross-generational torch was passed.

Chatting by phone from his West Marin homestead, the 66-year-old bluesman is gracious and relaxed, savoring the warm reception that has greeted his latest recording, a rollicking set of all-star sessions titled The Blues Rolls On. The disc features a remarkable cast of marquee names, from B. B. King, James Cotton, George Thorogood and Kim Wilson to such notable next-generation players as Warren Haynes, Tommy Castro, Derek Trucks and John Nemeth.

Two years in the planning, Bishop envisioned this self-produced CD as a new torch-passing, inspired by the tutelage and encouragement he received from the likes of Junior Wells and Hound Dog Taylor. “I really was treated nicely by these people and I’ve always appreciated it,” Bishop says slowly, “and I got to thinking about how the music flows over the generations, and I tried to line up some of the younger guys that are coming up now to do some of these old guys’ tunes.”

“I’m normally not much in favor of these all-star type of things,” Bishop allows, “because you see all these good names on the front and you take it home and you play it and you say, ‘Well, it doesn’t sound like he was into that one,’ ya know. But this one, it worked out pretty well.”

Amidst the collaborations lies “Oklahoma,” a short autobiographical summation backed only by his own crackling electric guitar in a brisk one-chord homage to Hooker. “The good ones,” Bishop acknowledges, “they just kinda come to you and they drop in your lap and they kinda write themselves, ya know? It’s a matter of luck getting something like that. I think the words fell out just about right.”

That humble hayseed persona—dubbed “Pigboy Crabshaw” by Paul Butterfield years ago when they both were young white students of Southside Chicago’s concentrated blues scene—fronts a sharply focused intelligence that has seen Bishop successfully ride through almost half a century in a notoriously unstable profession. Now he spends most of his non-musical time tending his garden and orchard of semi-dwarf fruit trees, happily cooking up and canning homemade jam for friends like B. B. King—that is, when it isn’t getting confiscated at the Oakland Airport.

“I tried to cop a plea,” Bishop says, telling of the security checkpoint guard who took a jar of jam out of his luggage recently. “I said, ‘Oh man, this is for B. B. King. Could you just give me a break and let me carry this through one time, ’cause he’s expecting it and everything.’ He looks like he’s thinking, and he says, ‘You tell B. B. King that the thrill is gone. And so is his jam.’

“The guy actually said that,” Bishop sighs. “It was cold-blooded.”