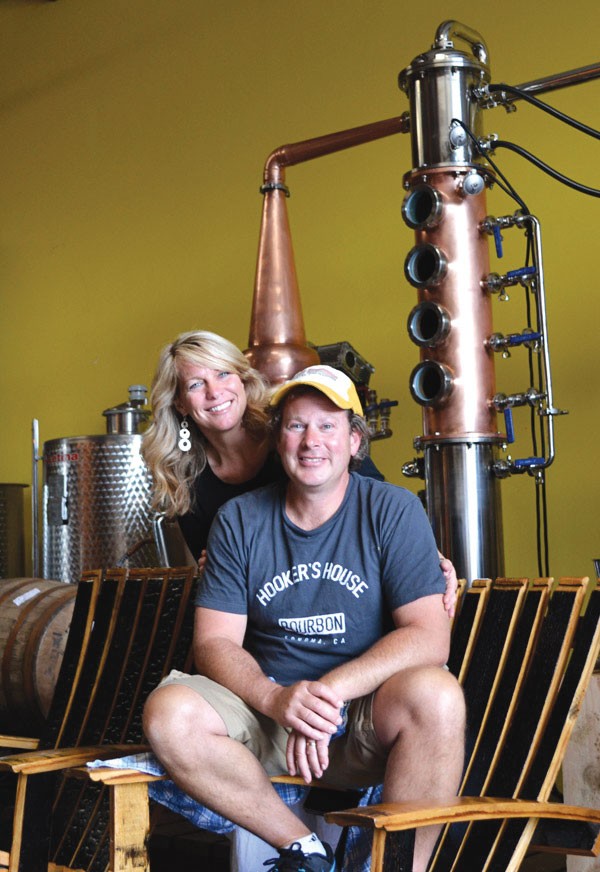 A Booze Is Born

Sample quaffs by the quarter-ounce at Prohibition Spirits

While visiting friends in San Francisco, Amy and Fred Groth of Colorado were told they absolutely must see Sonoma County.

Good call; they loved it. “This place is just like Italy,” they exclaimed, recalling earlier travels. “Everyone’s making wine and cheese.” Typically, the next thing a couple might say to each other is, honey, what this place really needs is another winery. They did not. Instead they asked, “Where’s the limoncello?”

At the time, according to Fred Groth, nobody in the U.S. was producing an artisanal version of the popular Italian aperitif, so they packed up and moved to Sonoma. Batches are made by rounding up a party of volunteers to hand-peel 3,500 pounds of fresh lemons, then soaking the zest in high-proof California brandy. “It’s the Tom Sawyer thing,” says Groth. “Oh, let’s paint the fences, that’ll be fun!”

A sweet shot of lemon meringue pie in the nose, Limoncello di Sonoma ($25) was such a hit with cocktail makers that Sonoma’s Girl & the Fig restaurant asked if they would make a fig version. Brewed with herbs, FigCello di Sonoma ($25, $35) has shades of Jägermeister, but is something to savor in a signature “Fig Kiss.” They went on to add bourbon and rum to their lineup.

Thanks to the Taste California Act, Prohibition Spirits now offers tasting flights at their “distillery and indigenous spirits lab,” located in a workaday warehouse across from Sonoma Skypark. Quarter-ounce pours are strictly measured, and due to antiquated state laws still on the books, visitors can’t purchase any grain-based spirits. It makes no sense, but grain and molasses based-spirits cannot be sold on-site but fruit-based liquor can.

Groth says that they entered the red-hot whiskey market by chance, when a bourbon broker specializing in small lots stopped in with a tempting offer. The catch? It would still cost a good sum. Groth reached out to college buddies with whom he used to pitch in a few dollars to buy a handle of bourbon. They pitched in again; after a day on the phone, he’d raised $10,000.

Although Hooker’s House bourbon is sourced from an undisclosed Kentucky producer, and Sugar Daddy rum comes from Jamaica and Guyana, the Groths have localized their product by finishing the booze in Pinot Noir, Chardonnay and Zinfandel barrels. “We believe we’ve changed it to make it our own,” says Groth. They’ve also savvily referenced “Sugar Daddy” Adolph Spreckels and General Joseph Hooker, local historical personalities to whom somebody, at some point, also said, “You absolutely must got to Sonoma.”