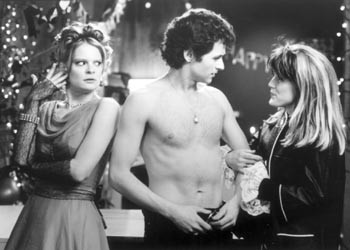 Love triangles: Martha Plimpton, Brian McCardie, and Catherine Kellner are looking for love among the product placement shots in 200 Cigarettes.

Product tie-ins abound in ‘200 Cigarettes,’ but cash is about all that registers

200 CIGARETTES details the somewhat blissful mix-and-match romantic exploits of several couples in the last days of disco and AIDS-free sex. Unfortunately for its young and talented cast, the film’s contrived plot–like its excitement-seeking habitués–is largely all dressed up with nowhere to go. Though couched as an updated American Graffiti, former casting agent Risa Bramon Garcia’s first feature film looks and feels more like Martin Scorsese’s After Hours, though with far less edge and a few too many sketchily drawn characters.

It’s New Year’s Eve 1981 in New York’s East Village, and Monica (Martha Plimpton) is hosting a party in her cavernous Noho loft. On the menu are crab dip, pigs in a blanket, and a huge dose of pre-party jitters. Looking like a refugee from John Waters’ Polyester, Monica surmises that throwing a party on the most ballyhooed evening of the year is like “facing death.” Sure that no one but ex-boyfriends and derelicts will attend, the neurotic hostess begins downing champagne with unrepentant gusto. Meanwhile, Monica’s guest list is busy trolling the Village for dates, kinks, and alcohol. In true Altmanesque fashion, the flirty dozen’s paths will cross repeatedly before ringing in the New Year together in an alcohol- and lust-soaked haze.

There’s Lucy (Courtney Love) and Kevin (Paul Rudd), two best friends swapping morose humor in the back seat of a taxi. It’s Kevin’s birthday, and his performance-artist girlfriend has just left him for her shrink. “One minute, you’re just a guy in love,” he opines. “Then you’re on some macrobiotic diet, listening to Joni Mitchell.” Lucy, a romantic road warrior, urges him to get over it, eventually offering herself as a sort of no-strings-attached birthday present.

Next we meet Val (Christina Ricci) and Stephie (Gaby Hoffman), two Long Island teens night-tripping in Manhattan. Misled by the thrill-seeking Val into thinking they would be hanging out with musicians all night, Stephie feels her urban paranoia escalate as the pair’s travels take them deeper into Alphabet City. When she finds out their true destination, a loft party in Noho, the carping suburbanite declares, “That’s not even a real place. They just made that up.” Undeterred, Val forges on, with Stephie in tow.

Also on the prowl are Tom (Casey Affleck) and Dave (Guillermo Diaz), two leather- and metal-clad punk rockers who instill terror in newbies Val and Stephie simply by approaching them. Adding to their menace: a mysterious “package” they are delivering to a friend.

Meanwhile, Eric (Brian McCardie), a painter specializing in abstract vaginas, is being unceremoniously dumped mid-date by Soho art-flunky Bridget (Nicole Parker). Not only is Eric lousy in bed, but he has invited Bridget and her shrewish best friend Caitlyn (Angelo Featherstone) to his ex-girlfriend’s party.

Most bizarre of all is pretty-in-pink Cindy (Kate Hudson), an Upper East Side deb dolled up like a Barbie princess. Her office-drone date, Jack (Jay Mohr), is indifferent to her klutzy charms until Cindy reveals that Jack is her “first.” Suddenly Jack can’t get enough of her.

The common link–and the film’s most awkward plot device–is the “Disco Cabbie” who picks each pair up at some time during the night. Somewhere between Boom Boom Washington and J. J. Walker, David Chapelle overplays his urban philosopher, who dispenses pop psychology and indecent proposals free of charge to a captive audience.

These are some–but not all–of the bon vivants seeking to ring in 1982 with a bang in this regrettably weak exploration of the brief period between the swinging ’70s and the conspicuous consumption of the ’80s, a time when New York’s blazing art scene was the ground-zero where punk rock, the sounds of the ghetto, and Wall Street met and mingled. The best thing 200 Cigarettes has to offer is the enthusiasm and craft of its cast–particularly Love, whose thrift-shop Venus is convincing, if not particularly endearing, and Mohr, whose canny SOB is flawless. As the overzealous hostess, Plimpton provides many of the film’s truest moments. Alas, the performances of the usually reliable Garafolo and Ricci are marred by the script’s lack of character development. As for Elvis Costello’s much-advertised appearance as himself, don’t blink or you’ll miss it.

If Garcia’s aim is to merely explore the vicissitudes of modern love, her decision to arrange the story around a particular point in time undermines that simple goal. By framing the film so specifically, the implication is that it symbolizes something larger. So when the writing pays only the most casual lip service to politics, art, and music, one gets the distinctly cynical feeling that the MTV-produced film was created not to entertain, not to stimulate, but simply to sell.

Using nostalgia as a marketing tool, 200 Cigarettes is a bona fide product-tie-in bonanza, with poster, soundtrack, and T-shirt opportunities galore and an entire network to promote them. If that’s the goal, then 200 Cigarettes is nothing but a sham–and Garcia’s aim anything but true.