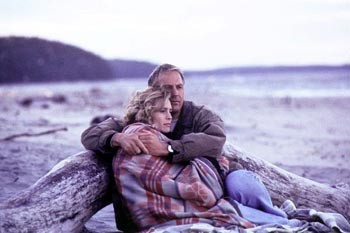 Writer David Templeton takes interesting people to interesting movies in his ongoing quest for the ultimate post-film conversation. This column is not a film review; rather, it’s a freewheeling tangential exploration of life, alternative ideas, and popular culture.

I’M ABOUT TO SPOIL the movie for you,” whispers Dr. Peter Kramer, leaning over to reveal that this realization is making him grin bemusedly in the dark.

“Uh, OK,” I whisper back, eyes on the screen as Kevin Costner, perched on the deck of a very pretty, dock-side schooner, makes complicated eye contact with Robin Wright Penn, who stands wrapped in jackets and scarves while returning his meaningful gaze. As my guest warns me of the impending ruination of the film, I assume he is going to divulge some guessed-at plot point. Maybe he’s figured out how the whole thing is going to end.

“Blue,” he says. “There’s not a frigging scene in this movie that isn’t dominated by the color blue. Haven’t you noticed? I bet you won’t be able to count to five without seeing blue.”

It’s ruined. I go through the rest of the movie trying to count to five.

Kramer–who lives in Providence, R.I.– is a noted psychologist and the author of Listening to Prozac, the controversial 1993 bestseller that examines the role of antidepressants on a patient’s sense of self. His latest work is the delightful, entirely unexpected Should You Leave?, newly released in paperback. It’s a series of short stories disguised as a self-help book, an examination of several couples wrestling with the decision of whether or not they belong together. The author, grappling with psychotherapy’s mandate against giving advice, wonders what kind of advice, if any, would be appropriate or helpful with each set of fictional lovers. It’s a gripping, entertaining, and truly enlightening work.

The color blue is seldom mentioned.

As for the movie that Kramer has just gleefully derailed, it’s Message in a Bottle, based on a book by Nicholas Sparks. A harried working woman from Chicago (Wright Penn) yearns to find her one true love. She discovers a tide-tossed bottle–it’s pale blue–containing a gloriously passionate love letter, full of pain, longing, regret. She falls in love with the writer, based only on the intensity of his passion. She tracks him to the Outer Banks of North Carolina. He (Costner) turns out to be a shipbuilder. His wife died. He’s very sad. He writes letters to his dead wife. He puts them in bottles. He thinks he will never love again. In walks the woman from Chicago.

“That said, you can’t really get away from this film being essentially nauseating.”

“Nauseating,” I agree, leading the way to a table inside the theater’s lobby-side cafe. “And formulaic. And blue.”

THOUGH the movie’s been over for 10 minutes now, half of my brain is still busy counting, “One, two, three, four …” “The blue thing!” Kramer laughs, shaking his head. “This movie is like a tone poem to the color blue–maybe it’s supposed to be ‘sea-bottle blue’–and it’s also a tone poem to water. We see the rain outside the window when they’re making love; we see the light playing over their bodies, so their bodies are made to look exactly like water. Maybe we’re supposed to feel that we’re trapped in the bottle, too.

“Despite how easy it is to make fun of, though,” he observes, “it does work. There’s a lesson to writers in this, and that is: ‘Formula works.’ Formulas become formulas because they touch something in us.”

“So what did this formula touch in you?” I wonder.

“Oh, you know,” Kramer smiles. “The part that responds to things like, ‘Life is short, attachments really matter, we all want to loved–that kind of thing. It says that if we want to be loved, we have to be willing to go for it at any moment, at any stage of life. You can go on about practicality and hedge funds and every other damn thing, but there’s nothing like grand opera. There isn’t enough grand opera in our lives. It gives us something we desire.

“I think urban life–our commodified, capitalist life–is too much for us,” Kramer adds. “We know it, we all know it, and we want some way out of it. We want relationships that are not practical, that are not based on bank accounts, that are not based on some absolute pecking order of worth. We want attachments that are not contingent, that won’t be threatened when we get wrinkles or lose our job–but are somehow immortal. And I think this movie plays off of that notion.”

“So why would we settle for grand opera,” I ask, “or movies like Message in a Bottle, instead of embracing love in the full-bodied, no-limits way these fictional characters do?”

“Some people do,” Kramer replies. “But it’s not easy in a culture that honors flexibility and autonomy over having strong connections.