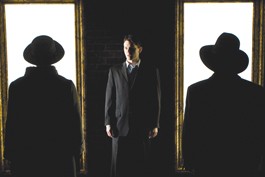 Tempests, time-travel, puppets and more stride the boards this fall

From time-traveling Victorian butterfly hunters to time-traveling Spanish-speaking immigrants; from shipwrecked sailors fending off the attacks of benevolent wizards to eccentric social anarchists fending off attacks from the IRS; from philosophical Iraqi expatriates to culture-challenging Jewish artists, the local theater scene looks to be a fascinating autumnal parade of chance, risk, individuality and danger.

Eric Overmyer’s offbeat ‘On the Verge,’ sets sail at Petaluma’s Cinnabar Theater Sept. 25&–Oct. 11, following three pith-helmeted Victorian explorers (local favorites Liz Jahren, Laura Jorgenson and Jessica Powell) as they head into the jungle in 1888 and find themselves journeying through time, skipping inexplicably about the globe, wielding knives and net, and dropping eloquent one-liners all along the way. Across their universe, the curiosity-driven trio encounter a series of unusual humans, trolls and yetis, all played by one amorphous actor (Tim Kniffin).

Best known as the writer and producer behind such television shows as Homicide: Life on the Streets and The Wire, Overmeyer’s mind-bending script makes language the key. A co-production with the Sixth Street Playhouse, this show will make its own leap across time and geography when it moves to the Studio at Sixth Street for another run in late October.

The time-traveling theme continues with the Imaginists’ world premiere of ‘Extranjeros de la Propia Tierra’/ (Aliens of the Land Itself<.i>), a production of Project 104, created in collaboration with the Graton Day Labor Center. The show, running Sept.17&–19 and 24&–26, looks to continue the daring, experimental theater that has become the hallmark of Santa Rosa’s Imaginists Theatre Collective. Set in a “mythical desert,” the Spanish-English comedy-drama-fantasy involves a magical passage through which a band of home seekers travel back and forth through time. The story’s more fantastical elements apparently include a talking shoe and a flood-challenged courtroom, and was created by the performers as an exploration of immigrant and social rights issues.

In Railroad Square, the Sixth Street Playhouse presents a very different spin on time-traveling, taking us back to 1930s America with Moss Hart and George S. Kaufman’s beloved ‘You Can’t Take It with You,’/ playing Oct. 2&–25. Featuring a large cast that includes John Craven, Joe Winkler, Peter Warden, Chris Murphy, Keith Baker and Elly Lichenstein, You Can’t Take It with You gives us the eccentric Sycamore family.

Apparently nuts up and down the family tree, the Sycamores experience a societal road block when they are investigated for tax evasion at the same time that the youngest (and sanest) daughter falls in love with the son of a straight-laced businessman. The comedy explores the true madness of the American dream, asking if love, devotion and individual expressions aren’t, in fact, more sane than the blind pursuit of normalcy.

Over in Sebastopol, the Sonoma County Repertory Theatre continues its annual Shakespeare festival with a wildly innovative adaptation of ‘The Tempest,’ running Sept. 18&–Oct. 18. Created by mask-and-puppet mastermind Conrad Bishop, this production combines live actors and puppets, digital projections and shadow imagery with an original musical score by Elizabeth Fuller, emphasizing the “puppet master” nature of the banished magician Prospero as he conjures the titular tempest and pulls the strings that will bring his enemies onto the shores of his island home. The buzz is already deafening, as word spreads that this visual, magical enterprise is turning out to be a true theatrical eyeful, full of jaw-dropping splendor and playful trickster surprises.

And speaking of surprises, actress Denise Elia had hoped to revisit the one-woman play ‘9 Parts of Desire’/ by Heather Raffo. Ever since taking on the gargantuan nine-role Parts last year (in a production at the Sixth Street Playhouse that won her a Bay Area Theater Critics Circle nomination for Best Actress), Elia has been imagining a return to the one-of-a-kind show, a poetic exploration of the lives of nine Iraqi women, before and after the fall of Saddam. Just a few weeks ago, Elia announced that, with her new found RIOT theater company, and the sponsorship of the Sonoma County Peace and Justice Center, she’ll be tackling the show again.

The piece now features a fresh, new polish of the script, offered up by playwright Raffo, with whom Elia has formed a strong friendship since first discovering the play.

Co-directed by Elia and Maria Magdalena Giordano, the show runs for eight performances, beginning (by judicious design) on Sept. 11, running through Sept. 27. All performances take place at the Glaser Center in Santa Rosa.

Following a summer of Wild West Shakespeare, Santa Rosa’s increasingly visible Narrow Way Stage Company takes its youth-powered vision and energy to the Studio at Sixth Street Playhouse with a three-weekend run of Laurence Fishburne’s hip-hop-fueled drama ‘Riff Raff.’/ Originally written for three black actors, Fishburne (yep, Orpheus himself has written a play!) makes it clear in the forward that he envisions actors of all colors and ages performing the show, though Narrow Way may be the first company to do it.

With a rotating cast of six actors, every performance will be different as new faces cycle in and out of the show about three urban friends attempting to survive the mean, uncompromising streets of the city. Directed by Adam Palafox, who trained with San Francisco’s legendary Campo Santo theater ensemble, Riff Raff runs Sept.25&–Oct. 11.

In Marin, the ever-excellent Marin Theatre Company kicks off its new season with the stage adaptation of Chaim Potock’s celebrated ‘My Name Is Asher Lev.’/ With a script by Aaron Posner, the play, directed by Hal Brooks, details the emotional journey of a Jewish painter, raised in the strict Hasidic community, as he finds himself torn between the faith of his fathers and his own overpowering drive to make a name as an artist. If the play is as moving, wise and insightful as the novel, the MTC production could be a significant theatrical event.

Finally, the Ross Valley Players celebrate their 80th anniversary with the Bay Area premiere of ‘Premiere,’ a comedy by the late, great Dale Wasserman (best known for his stage adaptation of One Flew Over the Cuckoo’s Nest). Running Sept. 11&–Oct. 11, this farcical comedy follows what happens when a desperate playwright fabricates a “lost” manuscript by William Shakespeare. When it becomes a worldwide sensation, he cannot of course convince the skeptical critics that he is the true author.

Theatrical adventurers will be wise to mark their calendars now. As several of this fall’s stage characters will attest, time has a way of skipping right past the best laid, and best played, plans.