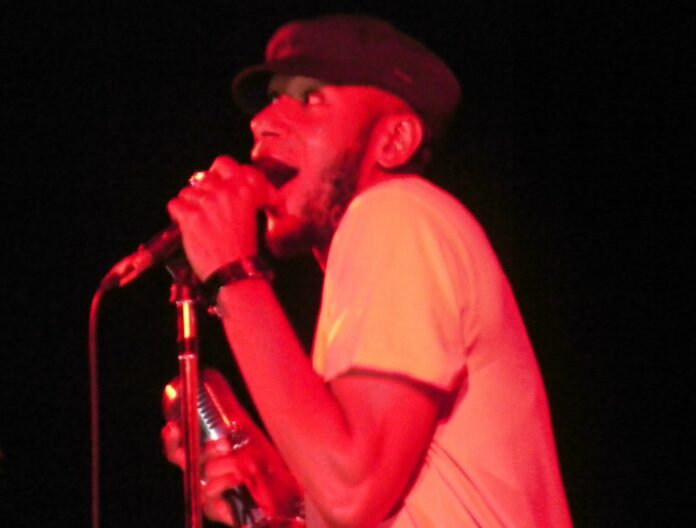 Photos &Review by David SasonMos Def‘s Oakland stop on his Ecstatic Tour got off to an awful start Friday night, with an hour delay and a sophomoric and at times annoying opening set from Jay Electronica, Erykah Badu’s current beau. The New Orleans rapper spent about 10 minutes just talking to the crowd. He went from a lame black vs. white noise-off, to sincerely thanking the Bay Area for opening its arms to the displaced from his native New Orleans, to asking the crowd for weed & lighting up the joint he received on stage – all before his first song. His spoken-word, mostly acapella post-Katrina tales show promise, but his poor showmanship overshadowed his chilling work.

His lady Ms. Badu, on the other hand, is an expert in that field, and had the crowd in the palm of her hand from the moment she strolled onstage in her red summer dress, introduced by way of Lil Wayne’s name check in “A Milli”: “Where is Erykah Badu at?” Surrounded by a potent and unique band set-up – with seven (yes, 7!) DJs with laptops and turntable, each playing a synthesized band part – Badu worked her way through a surprisingly up-tempo set that all but shattered her former image as Afro-centric “Queen of Neo Soul”, from opening anthem “The Healer” off last year’s brilliant apocalyptic album New Amerykah Part One (4th World War).

Badu enthralled the crowd – who danced & sang along throughout, seemingly supportive of her artistic growth and eclecticism – by singing, rapping, twirling her dress, posing, and playing her own drum pad, which started off an accelerated 808-beat version of old mellow favorite “Apple Tree”, a highlight of her set. During a rousing version of “Soldier”, Badu poignantly spoke of the documentary The Fourth World War, which inspired her album’s concept and whose portrayal of peaceful Zapatista protesters in Mexico touched her deeply. After an inspired call for the audience to scream their own names aloud, Badu ended the show with a thought-provoking question mark: “Remember: One smile can cause a million…” [then the Lil Wayne joint again to take her out: “A milli, a milli, a milli, a milli…”].

After such an amazing performance, headliner Mos Def had his work cut out for him, especially since the cult figure has even fewer well-known numbers than Badu. But Mos Def is such a charismatic performer (as evinced by his numerous, equally successful careers) that he didn’t need hits – or more than a DJ – to rock the crowd (albeit a smaller, thinned-out one). Opening the show from behind a drum kit (a real one, this time), Mos Def proceeded to (simultaneously) rap, sing & James Brown-dance his way through a few songs off his new album The Ecstatic, including his Middle East-themed Slick Rick collaboration “Auditorium”.”Let’s give it up for ‘the ruler’,” he yelled, as he danced gleefully to Rick’s recorded voice, which perfectly encapsulated Mos’s success as a performer; he’s a hip-hop fan like the rest of us & he’s having a blast. Everything was a tasteful tribute to his musical heroes, from his song “Close Edge” (a reworking of the classic Grandmaster Flash & the Furious Five song “The Message”), through his riffing on Run DMC’s “Down With the King”, to his dazzling performance of “Billie Jean”, moonwalk and all. The latter made everyone sing and dance along, and its spirit somehow cut through all the recent Michael Jackson media over-saturation.

The loafers & visible socks he wore in tribute to MJ were the flashiest thing about Mos’s visual aspect, which featured one DJ, a blank t-shirt, and of course the persistent red lights referencing The Ecstatic‘s album cover. This in itself was a bold move considering the impeccably dressed sneaker-heads comprising the audience, but that’s what makes Mos Def one of the realest around, and proof that hip-hop can succeed without all the flash & aggression. His confidence and skills – apparent without any pomp whatsoever – were nothing short of inspirational.“All you chest-thumpers, just stop it and be grateful,” he told the crowd at one point. “I’d rather be a genius than a gangster.” Hopefully, the Bay Area’s next generation of rappers were listening.—David SasonMos Def’sThe Ecstatic and Erykah Badu’s New Amerykah Part One (4th World War) are available now.