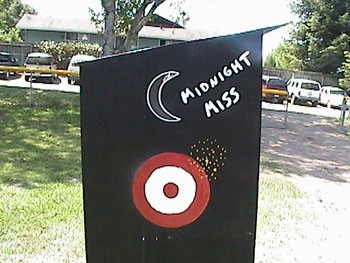 Royal Flush: The Midnight Miss is a fearful contender at the Xtreme Outhouse Race.

If you’ve never heard of an outhouse race, you’ve surely never been to Trenary, Mich., where some 3,000 pun-damaged souls gather each year to cheer on such area heroes as the Privy Pushin’ Poop Pilots or the Coop Crappers. Furthermore, you probably don’t know the young couple who met at the 1995 event, married after the ’96, and had their first child in concordance with the ’97 festivities. Such whirlwind romance is memorialized in their tasteful Wedding Outhouse, replete with sentimental photos of the loving couple at their nuptial potty, er, party.

But Trenary is not the only town so merrily afflicted. Mountain View, Ark., with its rich history of plumbing-deprived backcountry inhabitants, holds a riotous annual outhouse race. Then there’s the Great Outhouse Blowout in Gravel Switch, Ky., which is simply fun to say out loud. And Forestville, our very own outhouse capital supreme, of course assays its second royal flush this Sept. 20.

In fact, 23 towns nationwide hold such an event each year, all of them lousy with outrageous toilet humor and all of them great boosters for the community. Forestville’s, however, may be the only such “Xtreme” event. While this overloaded sports word usually conjures images of brazen athletes flinging themselves up walls or flying gravity-free across bridge spans, “Xtreme” in this instance connotes some eight home-built huts (no professional Port-a-Pottys allowed) being wheeled down a narrow 80-yard gravel track at the Forestville Youth Park.

No, the track’s not treacherously narrow; no, the outhouses don’t have to execute 360-degree aerial spins, land on one wheel, and then flip themselves the other direction; and no, titanium, wax, and anything “phat” are never necessary. So what’s so Xtreme about it? Race chairperson Bruce Witt shrugs with a chuckle, “Well, we couldn’t think of a normal reason to have a race.”

What, perhaps, is normal about the Forestville race is the community-minded fervor behind the event, the Forestville Youth Park having always been a curiously fervent place. Founded innocuously enough in 1960 by a group of parents looking for an adequate spot to hold their annual Cub Scout Carnival, the youth park quickly evolved into a nonprofit corporation that operates a full-service park without the help of the county.

“The Forestville Youth Park keeps our kids off the streets,” says Witt, who shares a fence with the park. “It gives people a place to go to out in nature. And we do this [volunteering] for the kids.”

With a soccer field, a baseball diamond, two sand pit play areas, and a massive 25-foot-long barbecue pit whose smoky goodness largely supports the park through an annual two-day meat-feed each June, the park is home to 20 Little League teams and two soccer leagues, offers rabid boosting to El Molino High School, and on one recent Sunday, provided a perfect place for a rowdy group of ball-playing firefighters to slyly taunt each other between pitches.

But the bathrooms–oy vey! Forty-three years have not been kind to these privies, making them the type of dark concrete pits, dank with unexplainable pools of icky water, which children are rightfully afraid to enter. So, explains Witt, who is by nice coincidence a plumber, what better way to pay for new bathrooms than through the absurdity of an outhouse race?

Of course, there are those who are slyly serious. Raynette James, a retired legal consultant on the Forestville Youth Park’s fundraising committee, is surely one of those. Putting her Raynette’s Dream outhouse, a black hut emblazoned with red flames, into the fray has brought out all of her devilish good humor. She’s suddenly in rough competition with contractor Fred Von Renner, who’s enlisted the high school track team to pull his outhouse. She, in response, is having her custom-made ‘house hauled by the mechanics at the Swiss Watch Garage, while she is seated regally on the pot.

Sponsoring her rod by asking for $10 donations from anyone wishing to have a business card laminated onto its sides, James hopes to raise an astonishing $10,000. “The kids in this community are amazing,” she says. “They may look kind of scary–but then all kids do–but they’re polite and they’re nice. They deserve it. And,” she continues with a grin, “now we’re getting all competitive.”