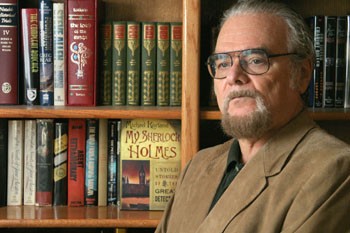 ‘My Sherlock Holmes: Untold Stories of the Great Detective’ (2003)

Michael Kurland opens his weathered bag and, magician-like, produces a large stack of books–too large to have come from so compact a container, yet there they are. Setting them on the restaurant table beside a plate of half-consumed unagi, he selects a well-preserved paperback copy of 1964’s Ten Years to Doomsday. While perhaps not a classic of the science-fiction genre, the book is significant in that it is Kurland’s first published novel (co-written with Chester Anderson) and stands as the opening salvo in a long and varied career encompassing more than 40 books as author and editor.

Somewhere along the way, Kurland made a career leap, transforming himself from a writer of science-fiction novels (including The Unicorn Girl, Pluribus, Tomorrow Knight, and The Princes of Earth) to a writer of mysteries and imaginative thrillers, with a specialty in tales about Sherlock Holmes’ arch nemesis, Dr. Moriarty. In doing so, Kurland admits that some of his earliest fans may have been left in the dark.

“People come up to me at the Paperback Book Show in Los Angeles and they’re surprised I’m there,” chuckles Kurland, a gregarious, 50-ish born-and-raised New Yorker with a Richter-scale laugh. “I go to the paperback show pretty regularly to meet my science-fiction fans. People come up with stacks of books for me to sign, and of course there’s always someone who comes up and says, ‘Kurland! Kurland! I thought you were dead!'”

Let it be known: Michael Kurland is not dead. He’s just been living in Petaluma.

Kurland moved here from San Francisco about three years ago, and while it’s not at all like the big, blustering cities he’s been drawn to throughout his life, the author says he likes Petaluma and enjoys poking about downtown, rummaging through the paperback section of used book stores. “It’s kind of a hobby,” he smiles. “I like to look for signed copies of my old books, to see who’s been getting rid of them.”

Such remarks, apparently, are fairly typical of Kurland and are indicative of his distinctive sense of humor. Equal parts curmudgeonly self-confidence and sly, witty self-deprecation, it’s a personal recipe he whips up once again after producing, from that same magical bag, a copy of the San Francisco Chronicle‘s bestseller list from the week of Aug. 3.

At the top of the list is Dan Brown’s Da Vinci Code followed by Harry Potter and the Order of the Phoenix. Down at No. 9, one notch above Tom Robbins’ Villa Incognito, is My Sherlock Holmes, a collection of short stories featuring different ancillary characters from Sir Arthur Conan Doyle’s classic Sherlock Holmes books. According to Kurland, who selected and edited the stories and contributes one of his own, his sudden appearance on a bestseller list came as a bit of a shock.

Kurland says, “My editor called me up right away and said, and I quote, ‘Who did you bribe?’ I replied that it must be some kind of horrible mistake! Of course, I really do think it’s a marvelous book, and the stories contributed by the other authors are magnificent, but I’m always surprised when other people notice those kinds of things.”

Among the writers Kurland persuaded to contribute stories are Richard Lupoff, Cara Black, and Gary Lovisi, devising such stories as “The Incident of the Impecunious Chevalier,” “Cabaret aux Assassins,” and “Mycroft’s Great Game,” respectively. By filling in the shadows of the Holmes stories and giving voice to the legend’s numerous supporting players, Kurland and company have struck pulp-fiction gold.

The book has been so well-received that Kurland has the go-ahead to try a sequel, of sorts. To be titled Sherlock Holmes: Only the Missing Years, the stories will take place during the three years that Holmes was presumed dead, between the great detective’s apparent demise (he fell, presumably to his death, as Conan Doyle attempted to shed himself of his most famous creation) and Holmes’ mysterious resurrection when Conan Doyles’ fans demanded it.

If you add the story collections to his popular Moriarty novels, The Infernal Device and Others (1978), Death by Gaslight (1982), and The Great Game (2001), it would seem that Kurland has stumbled into a niche that desperately needed filling. Then there are all those other books, the mysteries and thrillers that have racked up numerous honors, including a few nominations for the Hugo and American Book awards. It was an award, in fact, that partially sparked Kurland’s decision to stop writing about alien invaders, plagues, endangered galaxies, and underground mutant organizations and to throw his energies into various types of mysteries.

“I was always interested in both science fiction and mystery fiction,” he explains, “and I’d always read both, passionately. As a bit of departure, I wrote The Infernal Device, focusing on Moriarty, and suddenly the book was nominated for an Edgar and an American Book Award. I’d never come particularly close to being nominated for anything as a science-fiction writer, so I figured, ‘Perhaps I’m making a mistake.'”

Lifting his empty cup, he signals to the waitress across the room, making long-distance eye contact as he rapidly recites, “‘Bring me your tired, your poor, your huddled masses yearning to breathe free, the wretched refuse of your teeming shore; Send these, the homeless, tempest-tossed’–I think she saw me, but I’m not sure.”

Sure enough, she’s at our table in 30 seconds, filling Kurland’s cup with tea. Asked to talk about the unceasing popularity of Sherlock Holmes, Kurland pulls My Sherlock Holmes from the stack of books and reads aloud a piece of the introduction.

“‘It has been estimated by the sort of people who estimate these things,'” he reads, “‘that there are over a billion people living today who could tell you, at least in some vague fashion, who Sherlock Holmes was. Many of them don’t realize he is a fictional character or that if he were real he’d be well over a hundred years old now, as is shown by the volume of mail the London Post Office continues to get addressed to 221-B Baker Street.'”

While some writers might have been intimidated by tackling the world of Holmes, Kurland has no qualms about mucking about in the life of literature’s most famous detective.

“It helps that I’m not really dealing with Holmes, except only peripherally, ” he says. “I’m dealing with Moriarty. I’m taking one of Conan Doyle’s secondary characters and I’m making that character do my bidding. I would have been much more leery about tackling an actual Holmes story, describing him solving a crime and all that, with Watson trotting along.”

Of course, Moriarty is commonly thought to be a demented and unrepentant force of pure, seething evil. So how in the world did Kurland decide to turn this guy into a hero?

“My theory about Moriarty is this,” says Kurland. “Moriarty is a crook in the same sense that Robin Hood was a crook–not that he steals from the rich and gives to the poor, but that he flaunts the conventions of his day to live the way he wants to. He commits crimes, but not as an evil genius who goes around killing people. He’s a crook, but a very intelligent one, and the reason that Holmes hates him so much is that Moriarty is the only man that Holmes has ever met who’s smarter than he is, and Holmes can’t stand it. That’s my theory anyway.”

While Kurland’s one writerly contribution to My Sherlock Holmes is a story about Moriarty–a delectable page-turner titled “Years Ago and in a Different Place”–it’s been a quite a few years since Kurland produced an actual Moriarty novel. To feed the impatient fans, Kurland is working hard on a new Moriarty book, one that will take place in Calcutta in the 1890s. He’s enjoying the research required to bring an era to life and has become particularly knowledgeable about fabric and clothing styles of India in the late 1800s.

According to Kurland, it is his constant curiosity about such detailed minutiae that keeps him going after all these years. Every new book is an opportunity to explore a different time and learn about a different place or people. One has to wonder, with Kurland having tackled so many subjects, both fictional and non (he’s somehow found time to produce a separate stack of investigative works), will he ever attempt to tackle a memoir?

“I’ve never been that interested in my own life,” Kurland remarks with another chuckle. “I’d hate to write a memoir and have it be obvious to the readers that I don’t give a damn about the subject.”