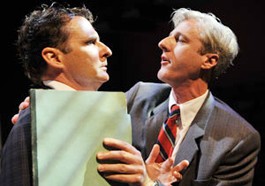 Santa Rosan Tim Kniffin, a fifth-generation Sonoma County resident, is that rare thing in these parts: a professional actor who actually gets to perform—not infrequently—outside the county, a shimmering dream for nearly every actor growing up in this area. Most recently, he appeared in Sixth Street Playhouse’s production of David Mamet’s Oleana, and will next be seen in the same company’s October production of Arthur Miller’s Death of a Salesman. Last weekend, Kniffin (above right) opened a big new show at the Aurora Theatre Company in Berkeley. In The Best Man, by Gore Vidal, Kniffin plays Sen. Cantwell, battling it out with another candidate as he vies for his party’s presidential nomination. The play, written in 1962, is a comedy-drama with plenty of political punch, and the role—a man with secrets trying to decide how much mud to sling on his way to the top—is the kind of role Kniffin does well.

“Doing this play has been great,” Kniffen says. “A lot of great actors want to perform at the Aurora, so I always feel fortunate when I get the opportunity to do a show there.” The play itself, often cited as Vidal’s best, is a challenging piece of work, bearing the author’s conspicuously labyrinthine dialogue and rapid-fire wordplay.

“This show is definitely not easy. It does have wonderful challenges for its actors,” Kniffin agrees. “Gore Vidal, what a great writer! There’s such dense language—and the humor is so subtle. During the previews, we learned exactly how funny a play this is. When I first read it, and all throughout rehearsals, I never really thought of it as having much ‘big laugh’ humor in it, but during the previews and on opening night, there were a lot of times we had to hold for laughs. Sometimes you just don’t know till opening night, but it turns out that this is actually a very funny play.”