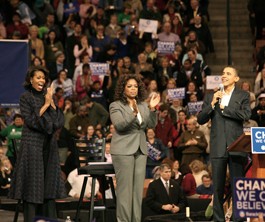 Barack Obama and the Post-Stupid Universe

BY THE WAY: Those of us paying attention were already alarmed by Oprah’s thighs in December 2007. Because we knew she was!

Today’s good news is that with George W. Bush’s imminent departure there’ll be no brain vacuum to be filled in the White House. In fact, Barack Obama ushers intellect into an Oval Office that’s sorely lacked it since the dawn of this new century. The bad news is our next president will need more than brains to deal with the shit storm awaiting him. Expect practically all things touched by Mr. Decider Guy to progressively worsen for months, if not years yet to come. Of course, crisis begets hope. Hope cultivates grand opportunity. And there’s nothing like hitting bottom to encourage us to look up for a change.

Sadly, when George Walker Bush ambles back to Texas next Tuesday, smugly oblivious to the enormous scope of still-unfolding calamities he’s inflicted upon this planet, our tragedy will be that his epitaph will not yet be affixed, nor will his horrific legacy be ambling off to Dallas with him. No, sirree. That Bush II legacy will long be haunting our land, stinking of rot and burning like napalm.

The question now, though, is whether Barack Obama’s own incoming administration—specifically, a cabinet and advisory team crammed tight with talented and accomplished players—is up to harnessing political lightning bolts threatening virtually every aspect of life on earth. Most Team Obama players sport middle-right to slightly left political persuasions. Does Team Obama have the drive, the creative vision and the gravitas to tackle monumental problems by applying radically humane solutions aimed at benefiting the many? What’s certain is that old ways of playing these games simply will not do. But personal histories and familial ties place most cabinet and advisory choices in lockstep with older regimes and the privileged few.

Abraham Lincoln had his cabinet of rivals. John F. Kennedy fielded the best and the brightest. Pundits tout Team Obama as a hybrid of the two. But will disparate personalities like those Obama has tapped work together as a team? Will they share resources, combine talents, put egos aside and direct their energies to a mutual higher purpose, innovating as one to solve problems dire times demand, or will they devolve into turf-warring backbiters, slouching off at the buzzer as “the Worst of the Best”?

To get a feel for what to expect from Dream Team Obama here’s a thumbnail handicap of prominent members and nominees:

White House Chief of Staff—Rahm Emanuel Could a guy named in honor of a Zionist terrorist, a former house leadership member who holds dual Israeli-American citizenships, whose nickname happens to be “Rahmbo” and whose documented escapades include mailing a coworker putrefied fish and venting anger at political opponents by slamming steak knives into a table while screaming “Dead! Dead! Dead!”—could such a White House Chief of Staff possibly be any worse news for Palestinians?

State—Hillary Clinton She’s battle-tested, measured for success and world-class connected. But will Hill deliver on Obama’s terms? And where does Bill figure into this equation?

Treasury—Timothy Geithner Multigenerational family connections. As the president of the Federal Reserve Bank of New York, Geithner played ball for Paulson with Bear Stearns and AIG, but refused to pony up for Lehman. A Larry Summer’s underling, but really Robert Rubin’s boy. A past IMF director and Council on Foreign Relations Senior Fellow.

Attorney General—Eric Holder Marc Rich is a red herring served on smoke and mirrors. Truth is, Bush ops fear Holder will come after them.

Interior—Ken Salazar Gang of 14 member and Joe Lieberman bud. Voted against enhanced CAFE standards, against repealing oil-company tax breaks, against requiring the U.S. Corps of Engineers to take global warming into account, but is for off-shore drilling.

Agriculture—Tom Vilsack A bonbon to the Midwest. Can Vilsack convince farmers that corn is a food?

Labor—Hilda Solis Born to immigrant parents in Los Angeles, Solis may be the brightest progressive hope in Obama’s cabinet. This U.S. House member and John F. Kennedy Profile in Courage award winner is a dedicated labor activist and environmental justice advocate. Chosen by The Nation magazine’s readership as Obama’s most encouraging pick.

Health and Human Services—Tom Daschle Ex–Senate Majority Leader may have learned things while banished to the wilderness, i.e., real life outside the D.C. bubble. Daschle likes single-payer healthcare but finds it “politically problematic.”

Veterans Affairs—Eric Shinseki Spoke truth to the Bush power machinery and got shit-canned for his efforts.

Homeland Security—Janet Napolitano In the words of Pennsylvania governor Ed Rendell, “Janet’s perfect for that job. Because for that job, you have to have no life. Janet has no family. Perfect. She can devote, literally, 19 to 20 hours a day to it.”

Director of National Intelligence—Retired Admiral Dennis Blair Noam Chomsky writes that East Timor, having voted overwhelmingly for independence, was invaded in 1999 by pro-Indonesian militia, where they “murdered some 2,000 people, raped hundreds of women and girls, displaced three-quarters of the population and demolished 75 percent of the country’s infrastructure.” On the heels of this devastation, Admiral Blair, against orders, offered additional aid to Indonesia.

CIA—Leon Panetta Nonspook background may actually be a plus for this damaged and dangerous agency.

Director of the White House National Economic Council—Larry Summers Today’s recession, brought to you by policies espoused by . . . Larry Summers! Summers pushed to repeal Glass-Steagall, the Great Depression–era lynchpin guaranteeing the integrity of the American banking system. Then, in 1999, Summers joined with fellow Clintonista Robert Rubin, and together with Alan Greenspan the trio successfully pushed for derivatives deregulation which in turn led to . . . now.

Clearly, Obama’s challenges aren’t all that’s daunting; many of his picks are, too. But what George the 43rd has left his successor battling is nothing short of an infinite-headed hydra, an ever-growing neo-mythic beast of epic proportions. As a consequence, ours is a constitutional republic in crisis. Virtually every institution in our national firmament stands presently at risk.

While the decision-making machinery seems a distant apparatus, it’s true that real, fundamental change also rises from slow powerful gears placed in motion by vast groundswells of populace activism. As our nation recalibrates its inherent potential to do good and then do better, awakened finally from ghoulish nightmares of pettiness, war and despair, then perhaps we’ll emerge into a more humane post-stupid universe—and perhaps then one day, as social philosopher Pete Townsend once so sardonically put it, “We won’t get fooled again.”