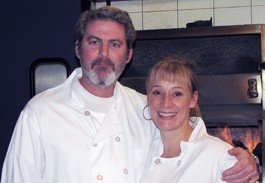 Eat, drink and be merry, for next week we have a new president

After eight long years of political and inspirational famine, the American public has strong reason to feast. The inauguration of soon-to-be president Barack Obama is truly reason to make merry. No celebration would be complete without fresh, delicious food, something tasty to imbibe and wonderful friends to share the moment. Since most of us can’t be partying in the nation’s capital, we’ve asked local chefs to create menus in honor of Mr. Obama and to let us know how he has inspired them.

Erica Holland-Toll, the executive chef of the Lark Creek Inn in Larkspur, chooses updated American classics in preparing an inaugural menu. “Obama has updated American politics and made them relevant for us,” Holland-Toll says. “He’s a huge inspiration to me. He’s a Democrat, young and an elegant speaker; he’s my generation’s Kennedy and someone to look up to.” Holland-Toll sticks to comfort food, planning a three-course meal of Dungeness crab Louis (recipe follows); Rosie organic chicken with cheddar chive dumplings, early spring vegetables and chicken gravy; and a caramelized banana split with banana malt ice cream and rum toffee sauce. She acknowledges that “people need a culinary hug, so to speak, to let them know things will be OK in difficult times.” This dinner will be served at the Lark Creek Inn Jan. 20&–24.

Chef Gordon Drysdale of Mill Valley’s Pizza Antica takes a higher-end approach, recognizing that an inaugural dinner tops a chef’s culinary experience. “I chose a feast based on the best seasonal bounty of the Northern California Bay Area, and I tried to add in things that none of my friends have ever seen, like fresh steelhead caviar,” Drysdale says. “I don’t know anything about Obama, but he seems to me to be just a regular guy, whereas Dubya seemed patrician and elitist. I am thrilled, enthralled; I can’t wait for Obama to take office. I hope he brings in the youth, the new taste-makers.”

Drysdale’s menu begins with three hors d’oeuvres: Tomales Bay oysters with Sparrow Lane vinegar and shallots; little, warm ham and cheese sandwiches with sharp mustard; and warm buckwheat blini with fresh steelhead caviar. First course is Dungeness crab salad with Haas avocado, mandarins and crispy bacon bits, followed by a second course of broiled Santa Barbara spot prawns with tarragon butter and buttered bread crumbs. The entrée is roasted prime rib-eye cap with sour cream mashed potatoes and chives, and the meal ends with Scharffen Berger chocolate pudding with crispy cinnamon bunuelos. As good as it sounds, though, this menu is all imaginary and will not be available at the restaurant.

At K&L Bistro in Sebastopol, chef and co-owner Lucas Martin raves about the new president-elect. “Obama has absolutely inspired me,” he enthuses. “I’ve been unbelievably focused on his speeches. I am totally enthralled by what a commanding presence he has as a speaker; the fact that he can articulate and enunciate the words is an improvement over our last president,” he laughs. “He’s stepping so confidently into the worst situation possible. My kids are living a piece of history. Obama is so organized and has surrounded himself with a top-notch crew,” he continues. “It’s the same in the restaurant business. It’s not about me, it’s about my staff.”

Martin has chosen items for his menu that he feels are accessible to everyone. “We can’t be celebrating high on the hog while everyone else is struggling,” he says. “Like Obama, we’ll have some humble American food, enjoy it, and then get down to work.” K&L’s inaugural menu begins with ahi tuna poke and blue fish pâté. (“The red ahi and the blue bluefish symbolize the bipartisanship cooperation that we’re going to need to get us out of this mess,” Martin notes. “The poke is a nod to Obama’s Hawaiian roots, combined with the very East Coast bluefish.”)

Second course: Nantucket Bay scallop chowder (“Welcome to Washington, D.C.!”). Main: duo of beef, a roasted grass-fed Montana beef tenderloin with braised short ribs, potato purée, and butter-braised organic carrots. (“An elegant Yankee pot roast with respect for Obama’s heart-healthy diet and his concern for organics and sustainable farming.”) Dessert: apple pie with aged Wisconsin cheddar (“As American as it gets!”). A modified version of this menu will be served Jan. 20&–24.

Anne Gingrass-Paik, chef at Brix in Napa, takes a different tack when considering the presidential feast. For Obama’s inaugural menu, she went online and researched what some of his favorite things to eat are. “I don’t know much about him, but he has been inspirational. This is the most I’ve ever followed a campaign,” Gingrass-Paik says. “I initially participated in fundraisers for Hillary until she stepped down and started to support Obama. I liked his idea to include her in his cabinet.”

Brix will mark the occasion with a special prix fixe menu of Mr. Obama favorite dishes: trail mix snacks, spiced broccoli salad with currants and almonds, Gulf shrimp and white-bean chili with creamy grits, and a dessert of Seattle Fran’s sea salt chocolates with fresh-baked cookies. Brix will serve this four course menu for $28 on inauguration night, Tuesday, Jan. 20.  “America,” Gingrass-Paik promises, excitement creeping into her voice,  “is on the cusp of an exciting new era.”

Mix the crab meat lightly with the dressing (start with half and add more if needed). Place half of a red butter lettuce on each plate. Divide the crab in 4, and arrange on top of the lettuce. Garnish with pickled celery and half of an 8-minute egg. Drizzle the plate with fruity evoo and a sprinkle of coarse sea salt.

2 large eggs
2 c. ice
2 c. water
Bring eggs to room temperature. Put 2 cups of ice and 2 cups of water into a large bowl. Bring 2 quarts of water to a rolling boil, slowly add eggs. Set timer for 8 minutes, reduce heat so eggs are simmering, remove at 8 minutes and drop into ice bath. Peel and cut in half, the whites will be firm and the yolks will be bright orange and just barely set.

1 c. rice wine vinegar
c. water
c. sugar
3 tbsp. salt
1 c. celery hearts, thinly sliced
Place celery hearts in a bowl. Bring other ingredients to a simmer at medium-high heat in a saucepan. As soon as it simmers, pour the hot liquid over the celery hearts. Let cool and strain.