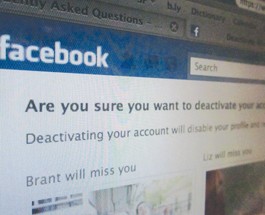 “I don’t touch Facebook,” declares Michael Romanowicz, 29, a freelance web designer who nixed his profile and more than 300 friends on the social network last year after he decided it was making him unproductive. (Worse, it was showing him too many pictures of his ex-girlfriend.) “I’m a digital professional,” he says, “and I fundamentally disagree with the philosophy of how Facebook has structured its product.”

It’s not that he and the social network didn’t have some great times. “What was really cool was that one of my friends was one of the first few hundred Facebook users, and for some reason he had a super admin access,” he said. They used the account to snoop through strangers’ photos.

But Facebook became “annoying” and “inundating” as it grew, and at some point, it stopped being fun. “So I deleted it. And what I found was that everyone I’ve had a real relationship with, after I deleted the account, sent me an email and was like, ‘Hey, how come we’re not friends anymore?'” he says. “And I’m like, ‘No, we’re totally still friends! Thanks for sending me an email because that proves that we’re still friends!'”

Google just launched its full-on Facebook competitor, Google+, which Wired called a “bet-the-company move,” implying that Google’s future depends on whether Facebook’s 600 million users will take to a new social network. Encouragingly for Google, the corpses of Facebook’s predecessors, often cited as cautionary tales of web consumer fickleness, are also in the headlines: Myspace was bought for a 10th of the $327 million it sold for in 2005 just before it hit 100 million users, and the proto-social network Friendster has relaunched with a whimper, as a gaming site that prompts users to sign in to find their friends—with Facebook.

Facebook lost more than 6 million users in May, according to a widely publicized report by InsideFacebook, which collects data on the site. That number was disputed by Facebook and other third-party researchers, who reported a net gain for the month, but the data shows that Facebook’s momentum has slowed—and the web’s power users, at least, seem to have moved on.

“The tech-savvy crowd has grown tired of Facebook,” Jason Calacanis, dotcom publisher of the bygone Silicon Alley Reporter, wrote recently in a newsletter predicting that Google+ will be a “crushing success.” Calacanis recently surveyed an audience of techno-hipsters at the Future of Web Apps Conference. The vast majority said they were using new services for things they used to do on Facebook. “I asked how many people were using Facebook more now than last year,” he wrote. “Almost no one raised their hands.”

Romanowicz’s friend Gordon Cieplak, 27, is co-owner of Handsome Code, a web-development shop with the slogan “More bicycles, less social networks.” He thought Facebook was “amazing” when it first came out. “I was like, wow, it’s such an incredible user experience and the design is so good,” he says. “I had never seen anything quite like it on the internet.”

But gradually, the site lost its luster. According to Cieplak, Facebook is an addictive time sink. (People collectively spend 700 billion minutes per month on the site, according to Facebook.) A few weeks ago, he quit in favor of Twitter and Tumblr.

“Among my friends, we all sort of loathe it,” he says. “It’s kind of the same way we loathe cars. They’ve just become part of this legacy infrastructure. Sometimes we use them, but we mostly dislike them.”

Facebook had fewer than 200 million users when Slate’s Farhad Manjoo declared it a universal good in 2009. “It’s time to drop the attitude: There is no longer any good reason to avoid Facebook,” he wrote then, accusing nonusers of harboring an “affectation” to make a “statement.” “‘I’m not on Facebook’ is the new ‘I don’t even own a TV,'” the actor Rainn Wilson wrote recently on Facebook, a comment 792 people liked.

The anti-Facebook cohort cites a range of reasons, philosophical and psychological, for quitting Facebook. “It is a system designed to not make you feel good; it’s designed to make you click more and go deeper into the hole,” says Cody Brown, 23, who cofounded a web start-up called Nerd Collider. “It can be totally soul-sucking. They also have something like 52 reasons to send you email.”

David Shapiro, a pseudonymous blogger, 22, quit Facebook after about six months on the site. “Facebook is this massive social experiment that is totally untested and could be fucking with people’s self images more than anything in decades,” he says.

The most common refrain, though, is that Facebook is no longer relevant when there are shinier toys to play with.

Two-year-old Petey Rojas, son of Peter Rojas, a founder of the popular gadget blog Engadget and the gadgets question-and-answer site gdgt, is not on Facebook. But he has a Twitter account waiting for him when he comes of age. His mother updates @PeteyRojas with quotes from the toddler (“You know my friend Caleb? He’s dangerous!”) and a mix of links; it has 247 followers. “It’s more like a placeholder, in the same way that I own URLs for him,” Mr. Rojas says. “I always tell people, if you have a child, you should buy the domain name as soon as you decide what the name is.”

But he hasn’t reserved Facebook.com-PeteyRojas. “By the time they’re old enough to use Facebook—13, technically—will they even care at that point? Will Facebook even be something that people care about?” he asks.

He quit the network himself a year ago.

Facebook fatigue among early adopters won’t necessarily spread to mainstream users, but it might—social networks are, after all, social. Screenwriter Aaron Sorkin, having won an Oscar for The Social Network, recently announced he was through with the site. “I have a lot of opinions about social media that make me sound like a grumpy old man sitting on the porch yelling at kids,” he said during a panel at Cannes.

But Facebook certainly seems worried about being ditched, judging by the hoops users have to jump through in order to leave. If you’d like your account “permanently deleted with no option for recovery” (these words are in bold), you must submit a form. This takes you to a page warning that your profile will be permanently deleted with no option for recovery, and tells you to click “submit” if you’re sure, implying that this click will instantly and irrevocably destroy your Facebook profile. Actually, it opens a verification page with a password prompt and spam test. If you pass, a window pops up: “Your account has been deactivated from the site and will be permanently deleted within 14 days. If you log into your account within the next 14 days, you will have the option to cancel your request.” Then, Facebook sends you an email with a link to cancel the request.

The delete option is buried, though, under the option to “deactivate,” which merely freezes and hides a profile, “just in case you want to come back to Facebook at some point.” When you deactivate, a page comes up with the heading, “Are you sure you want to deactivate your account?” above pictures of your friends with captions: “Mark will miss you. Alejandro will miss you. Vanessa will miss you.”

“When I deleted my account, I had this Swedish intern that I was in love with,” Romanowicz recalled. “She was so cool. And Facebook must have recognized that I had viewed her profile over and over again. Facebook was like, ‘If you close your account, these people will miss you.’ I was like, this is fucking hilarious.”

Romanowicz ran into the Swede recently, by coincidence, at a bar. “We danced for a little bit,” he remembered. “It was a good close to that small love affair.”

This article originally appeared in the New York Observer.