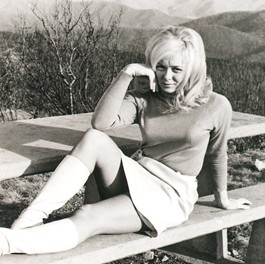 Given its essential talking-heads quality, the new Errol Morris film Tabloid is as salty as it is strangely light-hearted. There’s no one’s life at stake this time, as there was in The Thin Blue Line. Instead, there’s merely the question of whether Joyce McKinney, a Wyoming beauty queen, committed a very unusual sexual assault 30 years ago. “It’s a love story,” McKinney insists—but if you believe her when she insists something, you’re headed for trouble.

In 1977, McKinney went to England to get her hands on the love of her life, a Mormon missionary she’d met back in America. Three day’s dalliance in what she describes as “a magical moonlit cottage” in Devonshire made her the well-reimbursed toast of the English tabloids.

Unfortunately, McKinney got caught in the rivalry between two of them, the Express and the Daily Mirror. While one rag presented her as a gun-toting romantic in search of “a melding of two souls,” the other did some digging and found a richly unsavory past. McKinney denies this, as well she might.

The truth? It’s out there somewhere. Morris gives you a choice: smirking British tabloid journalists relishing scandal, or a first-person account by McKinney, a bail-jumper who served a little time in the very same Holloway Jail made famous by the Kinks. McKinney teaches us one inarguable lesson: a person seeking affection can turn to the “age-old wisdom” and “Christ-like love” of their doggies. Though even they can turn on you.

An incredulity-struck Morris rolls around in this berserk, muddy story, framing it with found footage and an uproarious clip from Franco Zeffirelli’s 1972 Brother Sun, Sister Moon. Key words the witnesses use to shape memories flash on-screen, like the subliminal titles in a John Waters movie. It’s a reminder of how people use phrases, and even simple, single words, to reinforce their memories of how the past absolutely, positively must have been.