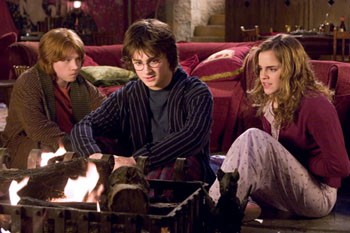 Fireside Chat: The magic continues this winter at Hogwarts.

Just as the winter season calls for heavy, comforting foods, the winter screen calls for spectacles and emotional wringers. This upcoming season promises to be as discontented a winter as any on record. Families get thrown together a lot from Halloween to New Year’s. They may not see eye to eye. However, they can all look at the same direction at a movie screen.

Although there’s no Lord of the Rings episode to cheer us with evil yielding to good (for a change), there’s still Harry Potter and the Goblet of Fire (Nov. 18) and The Chronicles of Narnia: The Lion, the Witch and the Wardrobe (Dec. 25). Night Watch, a much-delayed Russian hit, is also now scheduled for release sometime near the winter solstice, an appropriate time for a special effects–mdash;packed epic about a supernatural war between night and day.

For a more complex version of that battle than even Voldemort vs. Harry, or Aslan the Lion vs. the White Witch, there’s the war between love and self-hatred in the soul of John R. Cash, as played by Joaquin Phoenix. Walk the Line (Nov. 18) is as long as the Mississippi River, but Phoenix is touching and credible, bringing out the side of Cash that scared even the singer. T. Bone Burnett’s soundtrack is hands-down the best assembly of roots country music since the release of O Brother, Where Art Thou?

An array of winter comedies includes a concert film with the freckle-faced but utterly debauched Sarah Silverman, Jesus Is Magic (November). The Ice Harvest (Nov. 23) is a humorous heist picture set in a frozen-over Kansas City starring John Cusack and Billy Bob Thornton as hapless jewel thieves. Cheaper by the Dozen 2 (Dec. 25) concerns the rivalry of families at a summer lakeside resort. This and the remake of The Pink Panther (February) explain why Steve Martin looked so melancholy in Shopgirl.

Of all the remakes, the most anticipated is the Depression-themed King Kong remake by Peter Jackson (Dec. 25). Dec. 21’s Rumor Has It. . . is Rob Reiner’s take on The Graduate 2 project, expanded into a comedy about the family The Graduate’s Robinsons was based upon. Jennifer Anniston and Kevin Costner co-star.

The Ringer (Dec. 23) has an unspeakable premise: a jerk (Johnny Knoxville) plays disabled to crash the Special Olympics. And yet the previews are genuinely ticklish, what with champion actor Brian Cox doing some rare comedy work as a gruff coach.

Breakfast on Pluto (December) is the always-interesting Neil Jordan’s take on a novel by Patrick McCabe, with cerulean-eyed Cillian “Scarecrow” Murphy playing a transsexual. The tranny-drama Transamerica starring Felicity Huffman will possibly be out this winter also. It’s a mess, but an appealing mess, with tasty tidbits in it.

James Ivory’s White Countess (December) concerns between-the-wars exiles in Shanghai, and reunites the Redgrave family (mom Vanessa, her daughter Natasha Richardson and Natasha’s aunt Lynn). Memoirs of a Geisha (Dec. 23) needs no introduction, since it was filmed locally by Rob (Chicago) Marshall. Michelle Yeoh has the lead role in the rags-to-kimonos romance, with the grave Ken Watanabe as the Chairman.

Rumored to be even more friendly to the tear ducts, and certainly the winter movie with the strongest reputation, is Ang Lee’s Brokeback Mountain (Dec. 16). Lee’s Western is Larry McMurtry’s expansion on Annie Proulx’s short story. It’s a lament for a pair of post-WW II cowboys (Heath Ledger and Jake Gyllenhaal) who happen to be closer then their cowgirls would prefer. The latter are played by two of the prettiest fillies in the cinema today, Michelle Williams and Anne Hathaway.

Similarly prestigious is the newest by the transcendental but influential director Terrence Malick, The New World (Jan. 13), about the romance of John Smith (Colin Farrell) and Pocahontas (Q’Orianka Kilcher). Turning from the dark past to the dark present and the even darker future is Stephen (Traffic) Gaghan’s all-star espionage thriller about the crimes of the oil racket, Syriana (Dec. 9).