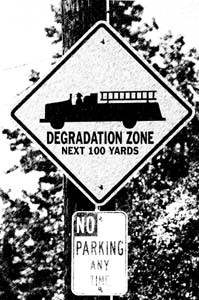 Editor’s note: Certain language in this article may offend some readers.

WHEN THE 1993 VERDICT in the Rodney King beating case was announced, Shirlee Ploeger says, Windsor Fire Chief Ron Collier commented to her: “Well, that shows you what we can do to a man. Can you imagine what we could get away with doing to a woman?”

After eight years as a secretary, Ploeger recently filed a lawsuit against the Windsor Fire Protection District, alleging years of sexual harassment that she says culminated in wrongful termination.

While firefighting is often seen as one of the last bastions of back-slapping male camaraderie, if Ploeger’s claims are true, employees at the district have elevated sexual harassment to an art form, even going so far as to post a vulgar slur on the business card of a company that offers sexual-harassment awareness training.

The 16-page suit contains a litany of allegations– including many involving firefighter Troy Collier and his father, Fire Chief Ron Collier, both of whom are named in the suit as the primary persons involved in the sexual harassment–that Ploeger says began in 1989. Included in the complaint are 17 pages of obscene jokes, cartoons, postcards, and other material that Ploeger alleges were frequently posted on the fire station’s bulletin boards and in the break room. Among the charges, Ploeger claims the all-male firefighting force screened pornographic movies after mandatory training meetings and often circulated sex magazines during work.

In the suit, Ploeger also alleges that the firefighters made “comments about women’s and young girls’ bodies, breasts, buttocks, including about women who entered or passed by the fire station or who were seen on fire or medical calls.” Troy Collier also made crude statements about women and young girls, Ploeger claims, such as: “I’d like to come in her hair and send her home with her tits hanging out” and “I’d like to treat her like the rubber fuck doll she is.”

Chief Collier, who has held the position since 1985, would not comment on Ploeger’s lawsuit, and declined even to discuss the department’s current policy on sexual harassment. He instead referred the Independent to his attorney, Bill Arnone, of the Santa Rosa-based law firm Merrill, Arnone, and Jones. “Miss Ploeger has already made similar allegations against the department in a workers’ compensation proceeding and it was denied then,” says Arnone. “The hard part is proving what you allege.”

According to Arnone, the Windsor fire district has always had a policy to comply with the law on sexual harassment. “The district is doing its best to keep up with current trends and heighten awareness of personnel,” he says. “It makes me sad to see the name of the district bandied about like this. It doesn’t do it the credit it deserves.”

Included in the suit is a copy of a letter dated Jan. 16, 1992, allegedly from Troy Collier to Ploeger, with statements that include:

“Dear Shirlee, Today I was informed that I have been promoted from my probationary status. Taking this into consideration, I will expect the following from you: Your courtesy level towards me shall increase immediately. You shall no longer question my authority or anything that I ask you to do. You shall respond immediately upon my calling of you. You no longer shall give me any guff regarding any comments made by myself about the role of the female in society… . These regulations will begin immediately!!! I expect you will use some common sense and abide by these rules.”

The letter was signed by Troy Collier and cc’ed to the file, the chief, the Windsor fire protection board, and Fire Capt. Alex Bowlds.

“This [letter] is a compelling document,” says Ploeger’s attorney, Newman Strawbridge. “It’s a threat that crushes this woman’s entire expression and being.”

He says that despite Ploeger’s frequent complaints, there was no investigation and disciplinary action taken during her employment. The suit claims that a supervisor of one of the alleged harassers acknowledged to Ploeger that she was being sexually harassed, but there was nothing he could do about it.

BY OCTOBER of 1997, Strawbridge says Ploeger was barely coping. She was forcing herself to go to work because as a single middle-aged woman she needed her job. For Ploeger, the final straw came when she received an anonymous memo, also included in the lawsuit exhibits. Addressed to “clueless dried up gash,” the memo says: “Why if you are so overworked don’t you quit… . The next female that will get hired to work for this department will be skinny with some nice big tits that are still pointing nortjh [sic] and will only open her big mouth when a fireMAN wants to put his cock in it. Do yourselve [sic] and us a faver [sic] and get your fat smelly cunt out of hear [sic].”

Ploeger then went on disability leave. “Eight years of absolutely disgusting and vulgar sexual talk and behavior were more than any reasonable woman could take,” explains Strawbridge.

“Stress caused by sexual harassment is apparently not considered real stress,” says Ploeger, “although high blood pressure; loss of a job, identity, and self- esteem; and the inability to pass a medical exam for the next job all seem real enough.”

Another document, from the workers’ compensation filing, shows a photocopy of a business card from L.B. Hayhurst, a Sausalito-based firm that offers sexual-harassment awareness training, above which Windsor Fire Department training officer Joe Giordani had allegedly scrawled: “Chief, I don’t know about you, but they can blow me. Joe.”

WINDSOR TOWN officials say there is little they can do about the allegations. The Windsor Fire Protection District is not affiliated with the town. It is a separate entity, with an elected board, in which members serve four-year terms, that contracts its services to the town. Currently, the board consists of five members, all male–at least three of whom are former firefighters. It is funded through taxes paid by residents who live in the Windsor area.

This isn’t the first firestorm of controversy to swirl around the department. The Windsor Fire Protection District recently met with criticism from the Sonoma County grand jury, which in the annual report released last month stated that it had investigated a complaint that the district illegally met in closed session to negotiate a contract giving Chief Collier a salary increase, a violation of the state’s open-meeting law known as the Brown Act.

“The Windsor Fire Protection District’s casual and laggardly responses to the grand jury’s requests for information reflect an uncooperative attitude and lack of respect for the grand jury’s statutory duty to investigate a complaint by a citizen of Sonoma County,” the report notes.

“The boldness is an indication of how much [department employees] think the community will support them,” says Marie De Santis of Women Against Rape. “This is widespread, systematic. It’s not an isolated incident, but a total pattern in our county. Municipal emergency services need a major fix.”

Meanwhile, Ploeger has asked for an injunction ordering the fire district to notify employees about its sexual harassment policies and how to report and investigate harassment.

“It brings to mind the little poem we learn as children: ‘Sticks and stones can break my bones, but words can never hurt me.’ As a 53-year-old woman, I know how much of a lie this is–words do hurt you,” says Ploeger, adding that she came forward partly to help others who may be trapped in a similar situation.

“There is nothing to weigh [in my decision to speak out],” she says. “If we don’t speak out, [harassment] will only grow like a very invasive, fast cancer. We have no choice–we must end the silence.”