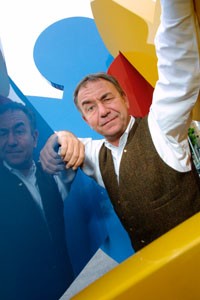 Comic Relief: Will Durst tries to slap that grin back on your face.

Comic Will Durst kisses off this crappy year

W ill Durst is a man on the edge. Literally. The renowned political comedian is precariously perched on the barricaded periphery of a huge hole in the ground. Durst is in the midst of an afternoon photo shoot–using San Francisco, the city he calls home, as a background–and he’s currently posing before the gargantuan American flag that hangs from a building at the opposite end of the hole that he’s attempting not to fall into.

As a pair of hard-hatted construction workers stand warily by, a secondary stream of photographers–folks who either recognize Durst or merely want to snap a shot of a highly animated man falling into a pit–take turns coming forward to shoot their own picture.

Finally, one of the construction workers steps up to find out what’s going on.

Hearing the name Will Durst, she says, “Yeah? Who’s Will Durst?”

He is a comedian with a considerable degree of fame, she is told, after which she eyes him with renewed admiration. “A comedian? Well good, let him come over here and tell me some jokes. Because, these days, I could use a good laugh!”

When Durst is finished, however, it’s she who makes him laugh.

“Why did they kick an old lady with knitting needles off of the airplane?” she asks. “They were afraid she’d knit an Afghan.”

“I do think people want to laugh,” Durst says a half-hour later over a tuna melt at the Mel’s Diner on Mission Street.

“The good thing about comedy is that, when something seems heavy or overwhelming or insurmountable–when you just don’t know if you’re going to be able to carry it–comedy puts a handle on it. It doesn’t lessen the weight or the pain of it. But it does make it easier to carry it around.”

Durst is talking about Sept. 11. That horrendous day caused an initial downturn in the comedy business, during which club owners across the country waited to see if people were still willing, or able, to laugh.

But now, comedians are returning to work–frequently to much bigger audiences.

Durst’s own style, a unique blend of potent punchlines and whimsical political fact-checking, is in high demand. He’s just returned from a week-long stint in Milwaukee and will be hitting the road again in a few days, working two more towns before returning to the Bay Area for his ninth annual Big Fat Year End Kiss Off Comedy Show.

That six-venue event, in which Durst teams up with such comedians as Johnny Steele, Steven Kravitz, and Debbi Durst, has become something of a New Year’s tradition for many, a comfortingly irreverent way to say so long to the crappiest parts of the previous year.

And 2001 has been an especially crappy year.

“Telling jokes about 2001,” Durst says, “feels a little like chewing on the carrion of the victims. But hey, my act requires that.”

Ticking them off on his fingers, Durst runs down the major plot points of 2001.

“In January,” he says, “we were dealing with the whole election fiasco, which still isn’t resolved according to some people, and then nothing happens until the Gary Condit shit hits the fan, which was really so bogus. I mean, the guy’s only serious crime is having the personality of a rusty propane tank, which only egged the media on. So we had Gary Condit, and then in September, of course, all hell breaks loose with the terrorist attacks–and that’s pretty much 2001.

“The election. Gary Condit. And 9-11. 2001 in a nutshell,” he proclaims. “Of course, what we lost in quantity and diversity we’ve made up in sheer impact, haven’t we?”

Durst, by the way, was scheduled to perform at a New Orleans comedy festival the week of the attacks, but the event was canceled after 9-11.

“That’s why I hate Osama bin Laden,” he shares. “It was a paid vacation in New Orleans–and the son of a bitch ruined it. If we don’t kill the guy, I’m planning to sue him in small claims court.”

Man of Steele: Johnny Steele joins Will Durst for a Dec. 29 comedy show at the Mystic Theatre.

It’s beginning to rain. The street is a gallery of wet American flags as Durst makes his way across the street toward the Metreon (where he plans to check out Airtight Garage, the futuristic arcade he’s heard of but never witnessed first hand). Nearly every window he passes boasts some patriotic enticement to buy something.

“I can’t believe all the people jumping on the antiterrorism bandwagon,” he says, adopting a midway barker’s tone of voice to shout, “The challenge is terrorism. The answer is a 40 percent off Patriot Sale on everything in the store!

“It’s weird,” he adds, “how patriotism and shopping now go hand in hand. ‘If you don’t go down to Nordstrom’s and buy me those shoes, the terrorists will have won!'”

Not 60 seconds after stepping inside the arcade, Durst is recognized by an employee. It’s Dale, a young guy who introduces himself as a fledgling stand-up comic.

After a few minutes of comedian insider chitchat–agents, venues, and the like–Dale offers Durst a free game of virtual bowling.

Durst accepts, saying, “Hey, I bowl. I was in a league once and everything.”

Twenty minutes later, Durst admits that virtual bowling is a lot harder than the real thing.

“I can’t move my arm,” he says, rubbing the tendons so recently committed to rolling a nonexistent bowling ball up nonexistent hills. “That was even harder than comedy!”

These days, that’s saying something.

Back outside, before taking his leave, Durst has a final thought regarding the future role of comedians in an unpredictable and fast changing world.

“And shades of gray are not as easy to laugh at.”