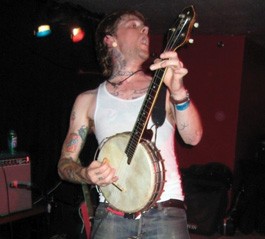 The Devil Makes Three have been spoiled by good audiences. As in, crazy good. In Portland, the band sold out the 800-seat Wonder Ballroom, and two nights before that, fans were bum-rushing the stage when they played to a thousand people in Humboldt County.

“It was complete mayhem,” says guitarist and lead singer Pete Bernhard. “Now when we get a quiet, normal audience, we’re like, ‘Don’t you like us?'”

The answer’s yes. Among the new songs DM3 are playing on this tour is “He Calls That Religion,” a song originally done by the Mississippi Sheiks in the 1920s. “It’s sort of a cover song, except I rewrote all the lyrics,” says Bernhard. “There are so many great preacher scandals right now.”

Another untitled new song sees the band branching into yet another genre—Sam Cooke-type soul—and a third, “This Life,” is a classic our-life-as-a-band tale. “It’s all about how what we do is somewhat insane, but we all love it a lot,” says Bernhard.