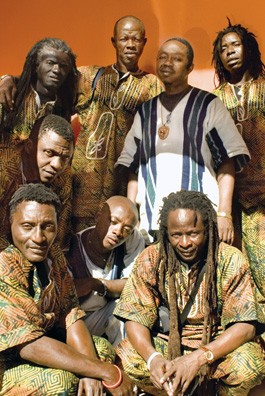 'It's like a dream' for Sierra Leone Refugee All Stars

SURVIVORS:Music has helped heal the violence in group members’ past.

Merely being alive is a miracle for some of members of Sierra Leone’s Refugee All Stars, who fled their country during a wave of violence that culminated in a 1999 rebel attack called Operation Kill Every Living Thing.

While trying to escape Sierra Leone with his father in the 1990s, Refugee All Stars singer Black Nature watched in horror as his dad was locked in his car and burned alive by rebels. Band leader Reuben Koroma and his wife walked almost 50 miles without food, sometimes stepping over corpses, to evade rebels’ bullets and bombs. “I never thought I’d be alive at this time,” he says in a phone interview.

“It’s like a dream to me,” says Koroma of the All Stars’ rise from the squalor of sun-baked, vermin-ridden refugee camps in Guinea to global fame and adulation. “I never imagined we’d become famous and tour the world.”

With the All Stars’ uplifting blend of deeply indigenous West African rhythms, undulating reggae beats and hip-hop, it’s easy to understand why they’ve gone from jamming in ramshackle huts to playing before thousands of fans at festivals from Bonnaroo to Japan.

The band’s break came in 2002 when filmmaker Zach Niles traveled to Guinea, which borders Sierra Leone, to hear refugees’ stories. At the last camp he visited, he met the All Stars and knew he’d found his documentary subject. Sierra Leone’s Refugee All Stars, released in 2006, won several film festival awards and is currently available on Netflix instant streaming.

Niles was looking for a band whose music would speak to the world. He says he was seeking to use art and music to “spread awareness in an empathetic way and figure out creative ways” to educate people about the human toll of the conflict in Sierra Leone.

Though they’ve lost their homes and seen their loved ones killed, Koroma and the All Stars remain upbeat and optimistic, and seek to tell the world about what’s good in Sierra Leone. One of those good things, says Koroma, is “the cultural music of Sierra Leone. It’s good for everyone in the world.”

For Koroma and the All Stars, music has been a salve to help heal the trauma that tore apart their homeland. “You can’t let it weigh you down; you’ve got to let it go out of your mind and make yourself happy,” he says. “Life is happiness.”