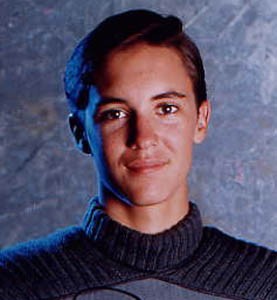 ‘Dancing Barefoot,’ by Wil Wheaton, is available from Amazon.com.

Wheaton in his ‘Star Trek’ days.

You may or may not remember Wil Wheaton from Star Trek: The Next Generation. On the show, Wheaton played boy genius Wesley Crusher. Before Star Trek, he was a successful child actor with several films to his credit, including the lead in the 1986 hit Stand by Me. But despite his early successes, Wheaton couldn’t seem to get out from under the heel of Wesley Crusher, who (for reasons unknown to us normal mortals) has been called the most hated character in Star Trek‘s 20-year history. Wheaton found himself typecast at age 18 and, with a few exceptions, more or less disappeared from the public eye after leaving the show in the early ’90s.

That is, unless the public happens to spend a lot of time on the Internet.

Since 1999, Wheaton has kept a popular blog, www.wilwheaton.net, where he maintains daily posts about his life and career. At this point, he has amassed a fairly large following and has become something of an Internet celebrity. His blog averages about 600,000 page visits a month, many of them repeat visitors. While his self-depreciating humor and likable personality factor into the mix, many of his readers relate to Wheaton, 31, because of his status as a self-described “geek.”

“When I think of someone as being geeky, I think of them with an overabundance of specialized knowledge,” he says by phone from his Southern California home. “I definitely have a great deal of that. I get excited about role-playing games and text-based computer games. And I have a real affection for science fiction.”

Last month, Sebastopol’s beloved tech publisher to many a geek, O’Reilly and Associates, published Wheaton’s first book, Dancing Barefoot. Culled from five auto-biographical stories that were originally published in some form on his blog, this is the first of two books O’Reilly will put out by Wheaton. The second, Just a Geek, will be released in June.

Wheaton never considered writing a book until cartoonist Dan Perkins, known as Tom Tomorrow and creator of the “This Modern World” strip, urged him to think about it.

“He said, ‘Your blog is popular and a lot of people read it–you really ought to write a book,'” Wheaton says. “I remember saying, ‘I’m not an author, I’m a struggling actor. I can’t write.’ But Dan said, ‘Look, you write every day. Just think about it.’ And I thought about it, and then some of my weblog entries began to turn into more developed stories.”

The stories became Just a Geek, a book about how Wheaton came to terms with the success of Star Trek and his lack of success as an adult actor. But Wheaton ended up with 100,000 words, far too many for the kind of book he was writing. From the trimmings came Dancing Barefoot. He shaped the stories, gave them some context and set up online fulfillment of Dancing Barefoot on his blog. His initial print run of 200 books sold out in four hours.

“It was just taking off,” Wheaton said. “I was getting all this magnificent, wonderful support from independent booksellers and small stores and people who read my website and really believed in me.”

He sold 3,000 copies from orders coming into his site before O’Reilly approached him to publish the book.

The stories in Dancing Barefoot range from Wheaton and his wife dancing in the rain (thus the title) to Wheaton’s introduction to William Shatner. Since it came out in March, the book has ranked as high as 184 on the Amazon.com list and was number 10 in its category. As of this writing, its Amazon ranking is 764.

These books are just the beginning of Wheaton’s writing career. In fact, after facing his failure as an adult actor, he has started to redefine himself through his writing.

“I’ve worked very little as an actor in the last couple of years,” he says. “I took most of last year off to work on these books and my agents dropped me, so I haven’t had an agent in almost a year. My real focus for the last year or so has been writing. I’m working really hard to create stuff that doesn’t suck. Before it ever gets to an editor, it has to pass my inner critic.

“And my inner critic,” he chuckles, “is a surly bastard.”