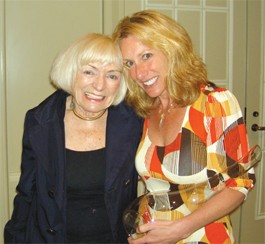 At a recent industry confab, it appears to be wine--and, sure, world domination

Since the 1980s, the wine industry has become an increasingly bright and hospitable place for a woman to make a living, and on June 23 in downtown San Francisco, hundreds of women and even several men gathered at the Four Seasons Hotel to celebrate the promising future of women and wine.

Hosted by Women for WineSense, a national 12-chapter organization founded in 1990, the event took the name of “Wines Women Want,” and for a man, it was a good place to spend the day. Women swarmed. They tasted wine, congratulated one another on various achievements, gossiped and exchanged rumors like there wasn’t a fellow in the house.

In fact, I feel it’s my duty to warn the captains of the industry that these women are plotting big things for the future. Among several morning seminars was a panel discussion in which five women moguls in various fields told personal success stories and advised the mostly female audience on political ploys and tactics for power-grabbing. Jacki Covello, a young face of success who in 10 years ascended from sweet young naiveté to a tier of power as a high-ranking New York City wine sales professional, bravely flaunted her philosophy of kissing ass when mingling with crowds of wine biz leaders.

“It’s all about networking,” she said. “Say hi to everyone you can, get their cards, send thank you notes–and make sure they know who you are.”

Out in the lobby, I warily traded business cards with a handful of the women. Oh sure, they smiled and firmly shook my hand, and several audaciously stated that it was “nice” to meet me–the words of cunning politicians if I ever heard them.

Dr. Ann Noble, a sensory scientist and flavor chemist at UC Davis, hosted another morning seminar. For an hour she tutored us in the art of mentally connecting wine aromas and flavors to our vocabulary. In the course of the session, I was nearly devastated to learn that the illustrious wine aroma wheel was not invented by a man, but by Noble herself, who engineered this handy circle of descriptors in 1990.

An awards ceremony followed, at which four women received distinction as rising stars in the wine industry. Petaluma author, journalist and television host Leslie Sbrocco took the Northern California honor. Author of Wine for Women, Sbrocco joked that she had tentative plans for a new book. “I’d like to write one called Men Who Whine, but I don’t have time to write a book that large.”

Carol Meredith, a retired professor of viticulture and enology at UC Davis, won the Lifetime Achievement Award. Among other things, Meredith has helped to discover the origins of Zinfandel and other grape varietals. And then there was Margrit Mondavi, that truly charming and vivacious bundle of energy. She was inducted into the Women for WineSense Hall of Fame, and allies of the Mondavi family took to the podium and spoke gracious words while Mondavi received it all with smiles, jokes and theatrical body postures before the kind compliments at last reduced the matriarch to tears.

Lunchtime arrived, and we made for the grand ballroom and found four food stations and scores of winetasting tables. The featured wineries had all received medals at the first ever National Women’s Wine Competition in March. I focused on a series of sweet fruit wines from Adams Point Winery in Berkeley. These were women’s wines–or so you’d think–but as I daintily sipped my mango dessert wine, women to the left, right and center filled up on big Zins and Cabs, and piled their plates high with intimidating portions of beef. They bantered conspiratorially, exchanged cards and discussed market trends. They ate more meat and poured still more wine and went out to the balcony to gnaw on cigars. I trembled. I’ve never seen so many women, all of them smiling so easily as they plotted their routes of attack into the 21st century and deeper into the world of wine and men.