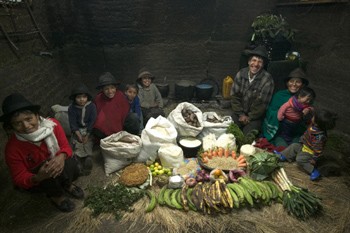 ‘What the World Eats’

Talk About Terroir: The Ayme family of the Andes live mainly on the potatoes they grow, preferring to sell the sheep they raise rather than ‘waste’ the meat on themselves.

‘What the World Eats’ exhibit something to chew on

Some 10 years ago, Napa photojournalists Peter Menzel and Faith D’Aluisio traveled the world, struck up friendships with accommodating souls and then asked these newfound friends to do something awfully peculiar: entirely empty the contents of their homes so that their belongings could be photographed.Amazingly, scores of families agreed, resulting in Menzel and D’Aluisio’s 1994 book Material World. Deciding to revisit eight of the Material World families in 2001, the couple–who are married with four teenaged sons–struck upon a new idea. What if they were to identify, assemble and photograph all of the food that comprised each family’s weekly meals?

The result is shown in part at a new COPIA exhibit titled “What the World Eats.” Menzel and D’Aluisio will release a comprehensive coffee-table book on the subject, Hungry Planet: What the World Eats, this fall. Traveling the globe from industrial France to far-flung Bhutan, from China to Berkeley, Cuba to India to Greenland to Japan, Kuwait, Poland and Texas, totaling 24 countries in all, the team met extensively with 30 willing families–in some cases living with them for over a week–prepared grocery lists and took them to the market, where they purchased seven days’ worth of typical foodstuffs.

Not surprisingly, the exhibit presents an overwhelming amount of Coca-Cola and Pepsi, KFC and McDonald’s, Purina and General Mills products in even the poorest Western homes. Rice, grains and corn are in great preponderance in Third World homes, meat being almost nonexistent. In considering these photographs, it occurs that the ability to acquire meat on a regular basis may be the most reliable indicator of worldwide wealth. Those in rich countries eat it daily; those in smaller countries can afford to splurge perhaps once a week.

Near each photo, Menzel and D’Aluisio list the ingredients displayed and their resulting cost in U. S. dollars. Ranging from just .91 cents per week for a large poor family in Africa to $400 for a well-fed family of four in Germany, the food shown goes from wholly fresh and natural–the original human diet–to cupboards and countertops flooded with only packaged foods, a clump of broccoli sometimes set indifferently to one side. The Japanese mania for packaging finds each of their bananas separately wrapped within the bunch, while families such as the Aymes of Ecuador (shown above) cut their own potatoes fresh from the ground. Speaking by phone from his Napa studio, Menzel reflects, “It isn’t really necessary to have a huge gourmet supermarket close by to feed your family well, nourish them and be content.”

Having produced a glossy book entirely devoted to the consumption of bugs (Man Eating Bugs: The Arts and Science of Eating Insects), Menzel and D’Aluisio are difficult to shock. Anything available and nourishing is suitable for their table and they enthusiastically shared meals with each of their 30 subject families. “There’s weird things that people eat,” Menzel shrugs, “but I’m pretty much inured to that. What’s pounded home all the time when you visit people and eat with them is how alike we all are.”

Reflecting on the two years of travel that it took him and D’Aluisio to complete their work for the book, Menzel chuckles. “This one was so much easier than the first book. Can you imagine a foreigner coming up to you and asking you to take everything out of your house?”