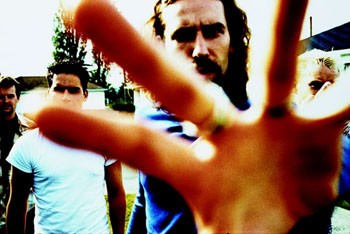 Do bands have the right to copy themselves?

Mikey Smith needs to chill out. Yeah, he’s young, he’s perceptive, he’s passionate about creativity and integrity. But there comes a point when it’s best to throw your hands up and walk away from the line that you’ve drawn in the sand. Mikey needs to forget about Nickelback.

I myself was blissfully unaware of Nickelback until Smith’s anti-Nickelback crusade reached a breaking point and became the subject of a feature on NPR’s All Things Considered. Here’s the gist of it: Smith, a 21-year-old Canadian, noticed a disarming resemblance between two songs recorded by the band Nickelback, 2001’s “How You Remind Me” and 2003’s “Someday.” To prove his point, Smith made some slight alterations to sync the songs together and posted them on his website, where you can hear them playing side by side.

Here’s what Smith has to say on his site: “Nickelback, you lazy, talentless bunch of wankers. What, did you think nobody would notice that you’re recycling your hideous dirge and selling it all over again to your deluded fan base? You bastards . . . you’re releasing songs that are exactly the same as ones you recorded earlier.”

For those who do not care for Nickelback’s brand of seventh-generation alt-rock, listening to Smith’s experiment can be painful–it’s basically Nickelback squared.

Both songs have the same strumming guitar openings, the same gruff bleeding-heart introspective lyrics, the same predictable shifts of dynamics, crunching of guitars and rocking out of drums. (You can easily assess this for yourself by Googling “Nickelback”; Smith’s song-splicing site is tellingly the first entry that comes up after the official Nickelback site.)

For the sake of argument, let’s give Nickelback the benefit of the doubt and assume–based on the perpetual overabundance of sincerity in the vocal stylings of lead singer Chad Kroeger–that the band composed “Someday” with the full intention of it being its own unique work and not a quick rehash of a previously successful formula. If this is the case, Nickelback is only guilty of perpetuating a longstanding pop-music tradition: appropriating one’s own song. There are literally countless examples, many of them much-loved hits and works of true genius.

Let’s start with Leadbelly. The dude was bad-ass for sure, but half of his songs sound exactly alike–so why were they all so good? Bill Haley and His Comets hit it big with “Rock around the Clock” in 1955, the guitar solo for which is instantly recognizable. Interestingly enough, the solo is also heard on 1952’s “Rock This Joint,” recorded by the Saddlemen, an earlier incarnation of Bill Haley and His Comets. Neil Young went so far as to have two cuts–“Train of Love” and “Western Hero”–sharing the same melody but different lyrics on Sleeps with Angels.

This is not taking into account another time-tested phenomenon, that of going the distance and copying other artists. In the early ’70s, George Harrison’s “My Sweet Lord” was famously just a little bit too close for comfort to the Chiffon’s “He’s So Fine.” There’s a little song called “Justify My Love,” whose drumbeat was lifted from Public Enemy’s instrumental segue “Security of the First World.” And there’s the wonderfully persistent rumor that a pre-fame Kurt Cobain stayed up late listening to Meet the Beatles over and over again before penning “About a Girl.”

There’s no shame in using particular variations on an especially great theme. Nickelback guitarist Mike Kroeger told the Cleveland Free Times, “When you have a distinct style, you run the risk of sounding similar.” He’s got a point there. How much more distinctive a sound can you have than Bo Diddley’s? And how many Bo Diddley songs sound very similar? And if all Nickelback songs sound the same, what does it matter? It keeps Nickelback fans happy and detractors like me running for the hills.