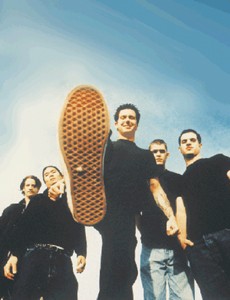 Bottoms Up: Unwritten Law lost their street cred when they used Christina Aguilera’s songwriter on their latest.

Finding out what’s cool by stealing from your employer

Earlier this spring, I stumbled across a paradise hidden in the offices of the North Bay Bohemian. Before me were rows and rows of compact discs that record labels had sent for review. “See anything you like?” the editor asked. What followed was a blizzard of music “borrowing,” the likes of which had not been seen since Napster’s hijacking heyday.

But one question kept popping up as I critically perused the shelves: Why did these people want their music reviewed by us? Then it hit me: alternative publications are cool, and for music to be successful it must be considered cool. So the artists and record labels send their most cutting-edge material to the journalistic authority on what is hip. My mission was now clear: grab all the recently released discs I could to discover what record companies consider cutting-edge.

In the spirit of information, I share the result of my Herculean labors.

The first thing I learned was that a lot of acts–particularly those on major labels–try really hard to be cool. The most obvious example is Unwritten Law’s new album, Here’s to the Mourning (Lava/Atlantic). A mainstay on the independent punk scene before joining up with a major label in an effort to tap into that sweet Blink-182 cash, Unwritten Law now attempt to mix punk with countless other disparate ingredients to form a style best termed “crap stew.”

Their latest release features enough programming, slick pop tricks and overproduced jock-metal elements to make even classical music fans yearn for the days of the Ramones’ stripped-bare revolution. And when a punk band enlists the help of the same songwriter that Pink and Christina Aguilera use, they officially lose any and all street cred.

It is no surprise that major label Interscope, which sent more review copies than anyone else, managed to provide the best examples of attempted cool. For three such Interscope bands, the path to the cutting edge is, oddly enough, to become more accessible. Queens of the Stone Age simplified their signature stoner metal to a much more straightforward rock sound for their latest disc, Lullabies to Paralyze. It still satisfies, but not quite in the same way as their older, more varied material.

Then there’s Will Smith, grasping at the bass-heavy boredom of TRL rap with Lost and Found, all while ironically talking about how different he is from all the other rappers. Stick with making cuddly movies, Fresh Prince, leave the bland hip-hop to professionals like Nelly. And You Will Know Us by the Trail of Dead . . . used to find it difficult to get radio play, perhaps due to their eight-minute opuses of jangling, jarring experi-metal. For their new release, Worlds Apart, the band wrote shorter, simpler and more straightforward songs to create a sound more akin to new-era Modest Mouse than the Trail of old.

Another group that tried hard–really, really hard–to capture cool are Bay Area artists Rubbersidedown with their new release, ZeroFighter (V4 Records). These heading-over-the-hill mid-tempo rockers employ tough facial expressions and well-placed bottles of Jack Daniels to appear as stylish as possible on their album art. But it’s pretty difficult to look trendy when playing severely dated Gin Blossoms-style ’90s rock that sounds like it could be the soundtrack to a Beverly Hills, 90210 episode.

Still, the most horrifying example of crafting an image has to be the River City Rebels. These sexist grease monkeys offer generic punk-ish rockabilly peppered with gratuitous sexual imagery and themes. Whatever minor musical talent that may shine on Hate to Be Loved (Victory) is overshadowed by the group’s badly tattooed, overly eyelined, hyper-sexed appearance.

After all this posing and posturing from the bigger acts, many of the lesser-known artists and their no-frills ideals are like a breath of fresh air. The bluegrass stylings of Chatham County Line’s Route 23 (Yep Roc), for instance, are intricate and engaging. The group utilizes a four-part harmony to create a sound that is dense and layered. But the award for least image-conscious act has to go to Great Girl’s Blouse, who adorn their self-released EP 14741 with a casual picture of the group seated on a bench. The band’s music is diverse to an extent, experimenting with a grrl-rock format to create powerful folk with unexpected range.

Perusing my stacks, I was surprised to find not one but two releases from a little-known label, Grey Flight Recordings. The first was from an inventive group called Respira. Their five-song recording This Is Not What You Had Planned tinkers with the standard emo formula of bands like Saves the Day to come up with soulful and powerfully sung rock performed in a wide variety of styles and moods. Unfortunately, the other Grey Flight offering, Irradio, made no such attempts at reinventing the indie rock wheel. Their formulaic, Fugazi-inspired Make-Up for the Inaugurated is maddeningly repetitive and grows increasingly irritating as the disc plays on.

State of the State of Things

Were the albums sent to the Bohemian truly the cream of the cool crop, the cutting edge? For popular music’s sake, I hope the answer is a resounding no. But another question must also be asked. What is a large music conglomerate’s definition of cool?

Is it whatever’s popular or is it what goes against the grain? More often than not, the major-label music seemed to be a combination of the two.

As the counterculture grows more mainstream, more groups will alter their sound for the masses, as Trail of Dead do.

But the best bands will always be the ones that don’t even try. Before I began stealing off the shelves, I never would have guessed that, from a stack of the latest releases across all genres of the music, the coolest groups would be a traditional bluegrass band and an unknown indie rock act on an unknown indie rock label. It appears that naked honesty, raw emotion and being true to one’s self–that’s what is cool.