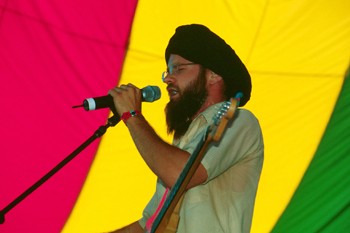 Each One Teach Two: Groundation lead singer Harrison Stafford doubles as a record exec on the band’s Young Tree label.

Major record labels are merging, record sales are hurting, 70 percent of the nation’s airwaves are controlled by the Clear Channel megacorp and no semblance of inspiring music can be found within the mainstream arena. At a time like this, who could possibly want to get involved in the music industry? Musicians, that’s who.

The above description fits the founders of Young Tree Records perfectly. The label formed with the 1999 release of Sebastopol-based reggae band Groundation’s first album, also called Young Tree. Two out of three of the label’s principle members are directly involved with Groundation: Harrison Stafford is the lead singer of the band; Kris Dilbeck was head engineer on the group’s earlier recordings. Newly hired marketing manager David Alima is the label’s first full-time employee.

Now what started as a vehicle for Groundation has expanded into a broader entity. Beginning with the January reissue of Pablo Moses’ reggae classic Pave the Way, the label is now releasing new and back-catalogue recordings by other legendary Jamaican musicians. Rather than just put out North Bay hits, its mission is to “preserve the history and integrity of reggae music.”

The benefit for Groundation in having their own label is that their core values become a non-negotiable, built-in feature of how they do business. Nearly all their music is recorded on analogue equipment (virtually unheard of today); Young Tree’s advance payments are delivered to artists without delay; new releases are recorded without an outside record producer; and the packaging is always at collectors’-item level. There is a sense that Young Tree didn’t want to cut certain corners that undoubtedly would have been cut had they connected with a major label.

The story of Young Tree is encouraging for new indie labels that may be intimidated by the complexities of the industry. “This whole company has started completely from the ground up,” Dilbeck says. “Harrison and I said ‘Let’s do this!’ without knowing how to do it. As I’ve told these guys before, we’ve fallen flat on our faces a hundred times, and we’re still here doing it, and it keeps getting better and bigger every time. And that’s how we learn.”

The label’s first step into a higher level was the release of Groundation’s 2001 release Each One Teach One. “Young Tree started with selling in local record stores on consignment,” Dilbeck says. “We didn’t get distribution until Each One Teach One came out. We had Ras Michael and Marcia Higgs on that album as featured artists, and because of those names, we were able to obtain national distribution.” But even with the added star power of these legendary guests, it was still something of a coup to win a deal.

“We put a package together and sent it out to distributors,” says Stafford, “but these companies wanted to work with a label with a big catalogue, who’d be releasing 10 albums a year. We had two albums total. But a local distributor in San Rafael called City Hall Records happened to be wanting to sign one more record label, and liked the album a lot. They said, ‘Yeah, we want to take this thing on, and after we sign Young Tree Records, we aren’t gonna be looking for any other record labels,’ so we got in there. And it’s great because it’s local. If we ever have any problems, we can drive down to San Rafael and knock on the door.”

Only a very unique label can win distribution with such a small catalogue and hardly any clout. Some might perceive the label’s ethics as a burden, but in fact it is its ethics that make the conditions right for the music. The industry is flooded with independent labels, so consequently, standing out is the way to succeed. And what better way to differentiate yourself than by putting music first?