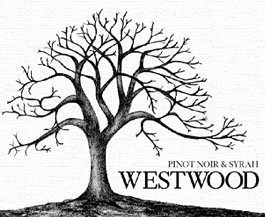 W estwood. Kind of sounds like a tumbleweed town ripe for an Old West showdown: “When the stranger strolled across the Sonoma Plaza, the craven December sun shot off two or three spindly rays and ducked behind a storefront on East Napa Street. He followed it down a narrow alley, into a courtyard that glowed as pink as a blushing bride, or a saignée de cuve. In the Westwood winetasting saloon, they were waiting for him: bottles uncorked, wines on the table—the damnedest good wines . . .”

Scratch that; it’s “winetasting salon ,” not saloon, and it’s quite urbane. Furnished with sofas and Persian rugs under a repro stamped-tin ceiling, it’s a casual setting for a serious sit-down tasting with the winemaker or his assistant. A UC-trained biochemist, John Kelly is seriously wonky on wine, yet fatefully beguiled by the irrational ups and downs of moody Pinot Noir. Like all West Coast vintners, he’s required to modestly admit to only “trying to make the best California Pinot”—and if mistaken for Burgundy, that’s OK by him. Sure has a deadeye for the Rhône, anyway.

Here’s the Wild West part of the story. On the northwestern frontier of the Sonoma Valley, Kelly set up weather stations to assess a new vineyard site. The data revealed that parts of this windy, narrow neck of the valley facing Annadel State Park were cooler than some of the most renowned vineyards in the Russian River Valley, inspiring Kelly to plant Pinot where no Pinot had gone before. Coincidentally, a canceled project in the Sierra Foothills left thousands of new Rhône clones from Tablas Creek Winery on his hands. These got planted in the warmer soils of the new Annadel Estate vineyard.

While the new Pinot grows, Westwood sources from southern Sonoma and Napa. The 2004 Carneros Pinot Noir ($60), deep-hued but translucent, has clean earthy aromas of ferns and berries, Jolly Rancher, cigar wrapper, rhubarb and cranberry—a brisk, quenching finish. The lighter-hued 2003 Haynes Vineyard Pinot Noir ($60) delights with rhubarb, cherry, chicory, and—beef bourguignon? The vineyard succumbed to the bulldozer in 2006, but budwood from this old California selection lives on at the Annadel Estate.

The 2007 Annadel Estate 4-Part Rosé ($12.50) is barrel-fermented dry in the manner of Chardonnay, making an unusually rich and complex rosé with notes of toast—don’t wait for summer! The 2005 Sonoma Valley Red Wine, “Red Four” ($22.50) Rhône blend, is like liquid, meaty fruit rubbed with black pepper and thyme; the 2005 Sonoma Valley Syrah, Annadel Estate ($28.50), like Tyrian-dark fruit and wet stone. Kelly says his wines are not fruit-driven, but soil-driven; that distinction may sound wily, but with these it does seem to make sense. There’s fruit, but steeped in minerals, imbued with savory herbs; it’s no simplistic blackberry jam. As for the 2005 “Unobtainium” Syrah— silky and bacon-fat smokey, spiced with juniper and sage, reputedly sourced from a “suitcase” Hermitage clone—don’t even get me started. It’s unobtainable.