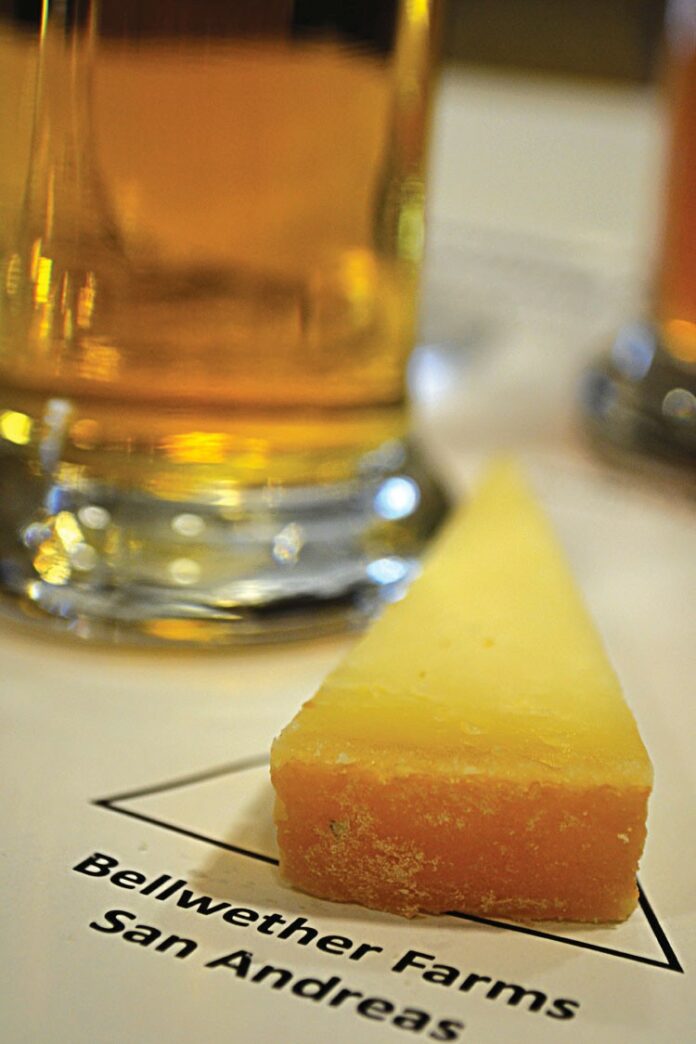 A small triangle of cheese lies on its mark on a tasting sheet. This is no ordinary, creamy yellowish wedge of cheese, nor does it merely sport a rustic rind or smell faintly of the farmyard. This cheese looks like it was retrieved from the crypt. Marbled gray-blue, it looks like it’s smoldering. This cheese needs a beer.

It’s no everyday ale that stands up to Boonter’s Blue, which is actually a mild blue cheese in the Spanish Cabrales style, and is made from raw goat’s milk by Boonville’s Pennyroyal Farm. Still, this sample of dusty gray-blue, hazily marbled Boonter’s, gamy and earthy smelling, is about as far from the usual jack or cheddar served at beer joints as Miller Light is to Russian River Brewing’s Consecration ale.

Those two are a pretty good pairing, says certified cicerone Chris Munsey, who presented a seminar on cheese and beer pairing at the California Artisan Cheese Festival in Petaluma. Indeed, the cheese brings out the wine and fruit notes in the sour dark ale, which is aged in Cabernet barrels with black currants, without losing its earthy appeal. So this is a good beer to pair with artisan cheese? Not with Fiscalini Farmstead’s bandaged-wrapped cheddar, which to my taste accentuates lactic off-flavors in the beer.

Munsey chose his pairings well, matching the cheddar with Calicraft Brewing’s the City IPA. That’s how a cicerone earns his keep—the designation basically means “beer somm.” Although he is employed by a Vermont creamery, Munsey lives in California, and promotes the idea that farmstead cheeses, which by definition are made with milk from the creamery’s own animals, ought to be enjoyed with “farmhouse” beer, which he more loosely defines as beer brewed “with a sense of place” or the inclusion of local ingredients.

There’s a place for lighter beer beside the cheese board, too. A slice of Point Reyes Farmstead’s Toma, which is mild but more flavorful than standard jack, fills out a crisp, bright ale brewed with chamomile and orange peel instead of hops by Oakland’s Ale Industries.

If fancy beer and the lilting term “cicerone” cement your notion that craft brew has gone too far down the precious path toward the old Chardonnay and brie trope, relax—greasy nachos are not going out of style. You could also think about craft brew and artisan cheese as basically reinventions, with up-to-date equipment and fermentation science, of even older traditions—and flavors.