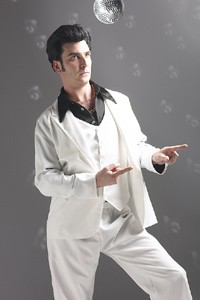 Hold the Cheese: What is it about wedding receptions that makes everyone want to break out in the chicken dance?

The inside story of wedding DJs

I was not invited to most of the weddings I’ve attended. That’s because I spent a few years working for catering companies as a server and as a prep cook at events–mostly weddings. Viewing the spectacle and pageantry of a wedding reception through the eyes of a paid laborer puts a jaded tint to the proceedings, and it did not take many weddings before I realized that DJs play the same songs at every single one: Kool and the Gang’s “Celebration”; the Commodores’ “Brickhouse”; Tommy James and the Shondells’ original 1968 version of “Mony, Mony”; Sister Sledge’s “We Are Family”; a medley of songs from Grease; and, of course, that God-awful chicken song.

It seems strange that a couple willing to shell out thousands of dollars on delicately constructed canapés, lush bouquets of pastel roses and gallons of quality tipple would so readily allow their reception to implode into a drunken spectacle of campy songs and bad dance moves. But I’ve also danced drunkenly and badly at many of my friends’ weddings to those same stupid songs and had a great old time. Does everyone feel this duality toward what has become our modern wedding-reception songbook? And how did AC/DC’s “You Shook Me All Night Long” come to join this songbook while, say, Iggy Pop’s “Lust for Life” did not?

I decided to go straight to the source and ask a real DJ, Alex Lacy, who has been DJ-ing events of all kinds for some 15 years. It’s summertime, when nuptial vows are in the air, and Lacy’s services are in high demand. When I first called, two things immediately struck me: (1) Alex Lacy is a woman; and (2) she sounds like a DJ. Indeed, Lacy came to DJ-ing events as an offshoot of her career as a radio DJ.

Lacy has a very systematic approach to building a party’s momentum. First of all, she prefers not to start off with songs that she feels are clichéd, like “Celebration” and “Mony, Mony.” Those might come, but not until later. She’s organized her entire catalog of songs by beats per minute, ranging from “What’s New, Pussycat?” at 63 bpm to “Sing, Sing, Sing” at 200-plus bpm. This way, the intensity of the party increases until it sucks revelers of all generations out of their seats and straight to the dance floor. When I went to visit Lacy at her Graton home office, here’s what else I learned.

Are there any songs that couples specifically request you not play?

I’ve lumped together “Macarena,” “The Electric Slide,” “Conga,” “The Chicken Dance,” “The Hokey Pokey,” “Limbo” and “YMCA,” and I ask them if they want [the package] or don’t want it. But I also tell brides and grooms that how the thought of the chicken dance sounds to you now is a whole different thing than after two or three glasses of wine and your grandma really wants to hear it.

In the last 10 years, have you seen a shift in the songs that couples request you play?

No, though there’s a trend to mostly traditional things, like “Unforgettable”–and there’s really not a lot of father-daughter songs, even less mother-son songs.

Once the reception starts, the tone of the event loosens up and the DJ becomes the cue for everything that happens until everyone goes home. How do you handle that?

There’s a big difference between the conversation-level music that’s playing when the bride and groom visit tables at dinnertime to when it changes to party time. But there’s a lot of things out of my control that make things drag: caterers are frequently late; the ceremony gets started late. If things have been dragging for a little while and people would really rather be going home, it’s really a lot of pressure on my shoulders to start the party and motivate people to dance.

Have you been to receptions where people didn’t drink that much but still danced their pants off?

Oh, yeah. Most people who call for a DJ really don’t have an idea of what makes a good DJ. There can be two exact parties of the exact same people at the exact same time and two DJs with the exact same music. And one party will fall flat on its face and the other will be balls to the walls for hours and hours. It’s the sequence [of songs], reading the crowd.

I’ve been to weddings where the DJ seemed to be under the impression that the guests had come specifically to see the DJ. How does a DJ avoid coming off like that?

If the music is working, you don’t have to urge people. The music does the entertaining and the party happens without the DJ focusing attention on themselves.

After our chat, I realized that you always hear the same songs at weddings because that’s what people want to hear. Weddings are one of the few–probably the only–places where people from eight to 80 shake their booties; therefore, you need songs that transcend fads, songs with real staying power that are neither prudish nor explicitly lewd. Songs that make you want to move. Every culture has its own wedding traditions, and getting blotto and doing the white man’s overbite to “Old Time Rock and Roll” in a rented tuxedo is our very own homegrown American wedding tradition. Which is a sweet thought.

Even so, if a DJ played the chicken song at my wedding, there’d be hell to pay.