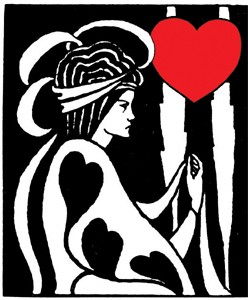 Considering the heart of the family, straight from the Eastern reaches of the Mediterranean

The restaurant is bustling, even on a Sunday night. Kids squirm in their chairs, the waitstaff is painfully behind and hustling to get orders out. Just inside the open kitchen, chef Nedal Swedan and his wife glide back and forth, barking at each other in Arabic.

We’ve come for an early dinner at Tahini Grill, one of only a handful of Middle Eastern restaurants in the North Bay. Around 6pm, midway through our meal, the restaurant suddenly gets still. Swedan emerges from the kitchen, quietly taking a spot behind the host station, and the music–which for the last half-hour has been lilting Middle Eastern strings–gets cranked up to bouncing Egyptian disco beats. Cue the belly dancer.

With a flash of curly, black hair and jangling coins, she bursts onto the floor, whirling, swirling and shaking through the center of the restaurant. All eyes lift from plates of hummus, lamb and kibbeh to the jiggling pillar of womanhood before us. To describe her as zaftig would be a ridiculous understatement. My eight-year-old son has noticed, the Boy appears to be heading toward cardiac arrest and I even find myself having impure thoughts. Swedan, with the pride of a father, watches his prized Egyptian cabaret dancer work the floor as he taps along to the beat. “She is very authentic, you know,” he says.

Despite the exotic style of dancing, the grill, which opened less than a year ago in downtown Santa Rosa, has several tables of families. It is after all, a family restaurant in the truest sense of the word. From the recipes brought from his family in Jordan, to working with his wife, to the shared plates of food that are so central of Middle Eastern cooking, the Tahini Grill is for and about family.

“In Jordan, I grew up eating. Cooking is such a family thing. Everybody cooks something,” Swedan says, taking a break from the dinner rush. He laments that the one thing that hasn’t translated to America, where he’s made his home for the last 28 years, is the ability to serve all of his dishes in the communal-style that he grew up with.

Typical Middle Eastern cooking is done with huge platters of rice, vegetables and meat piled generously for everyone to share. Forks are generally unused; instead, family members scoop up food with their fingers and hunks of pita bread. It is a sign of great affection for children to be fed by the hand of an adult. And though some dishes, such as hummus, the restaurant’s baba ghanouj (smoked eggplant dip) and fried kibbeh (cracked-wheat meat balls) are easily shared around the table, Swedan says that making individual entrées has been one of his greatest challenges. He revels in those special occasions when Tahini does large family-style dinners in its upstairs space.

The music returns to a murmur, and the dancer changes into her street clothes and sidles into a table. Food is immediately brought out to her, and she dives in ravenously, smiling at the enthusiastic fans who approach her table and applaud her performance. Swedan watches like a hawk, protective and nurturing.

In the culture of the Middle East, food is love, life and nourishment, along with entertainment and socializing. Men are as central–sometimes even more central–in the kitchen as women. Though each region has its own take on spices, ingredients and technique, there are many common culinary threads that run through them all–threads that become strong bonds for immigrating families like Diana Abu-Jaber’s.

The Jordanian American author recently penned The Language of Baklava (Pantheon; $23), both a reminiscence and a cookbook of her years growing up in a close-knit Middle Eastern family living in the United States and abroad.

Her father, Bud, is the central figure of her story. With his brothers, Bud makes many of the Middle Eastern meals Abu-Jaber remembers most vividly in adulthood. Much of what he cooks is painfully sentimental to Bud, as the foods of his childhood can only be approximated in America. Things like grilled chicken shawarma (also known as an “Arabic taco,” and somewhat akin to a gyro), mensaf (a Bedouin lamb dish generally served at celebrations and reunions) and baklava (the honeyed dessert more familiar to Americans) are served to the family with love and nostalgia for home.

In her book, Abu-Jaber captures the heartbreakingly sweet longing of her family for home while living in midcentury America, a land of Twinkies and Velveeta. She, like many, is caught between wanting the stick-straight blonde hair and fluffernutter sandwiches of her friends and the exotic wonders of a faraway culture she was born into.

Recalling events from the earliest reaches of her memory, Abu-Jaber sees everything through a slightly misty veil that softens reality and makes the central characters in her life a little blurred but highly human creatures.

“We ate Lambie today,” recalls a cousin, telling the six-year-old Diana that their dinner included the pet lamb they’d all played with and loved. Even more shocking is the story of how the lamb was slaughtered, kept from her by her father for some 20 years.

The men of the family, recalling their rough-and-tumble youth in the Jordanian countryside, had the idea of killing a fresh lamb rather than eating the prepackaged, sanitary-wrapped pieces from the butcher they’d become used to in America. With youthful bravado, the brothers held down the lamb and ineptly killed the bucking, kicking creature with several misplaced stabs to the throat, and ended covered in blood and wracked with guilt. The whole escapade was a disaster.

“Making shish kebob always reminds the brothers of who they used to be–the heat, the spices, the preparation for cooking and the rituals for eating were all the same as when they were children, eating at their parents’ big table. But trying to kill the lamb showed them: They were no longer who they thought they were,” she writes.

Every so often, Nedal Swedan goes back to Jordan to relearn how to eat. He says that being in America sometimes makes you forget. “I now eat kafta [a ground lamb patty] with ketchup,” he says, a little apologetically. The flavors of his homeland, he says, are very different. The lamb is gamier, the spices used are more intense and the experience reawakens his memory of how his family used to cook and eat. He uses that knowledge to keep his dishes as authentic as he can.

So, too, does Abu-Jaber return to her family’s roots in Jordan, a journey that is both thrilling and terrifying for the young Diana. But the constant thread running through the experience is food and family. Kebobs still smoke on the grill and family still come knocking on the door when dinner’s ready.

As we finish our meal at Tahini Grill, Swedan sends over two huge bowls of rice pudding, a traditional Middle Eastern dessert swirled with honey. “On the house, for the kids,” he says, pointing to my two children.

Eating the porridgelike sweet soup, I’m reminded of my own family’s version of rice pudding, albeit one prepared with a lot more cinnamon and cardamom. I spoon the milky dessert into my mouth and the eager mouth of my daughter. We’re all at the table, sharing this moment, sharing a bowl. As my baby girl grabs the spoon from my hand, all I’m thinking about is my own home–a place where everybody eats and everybody cooks.