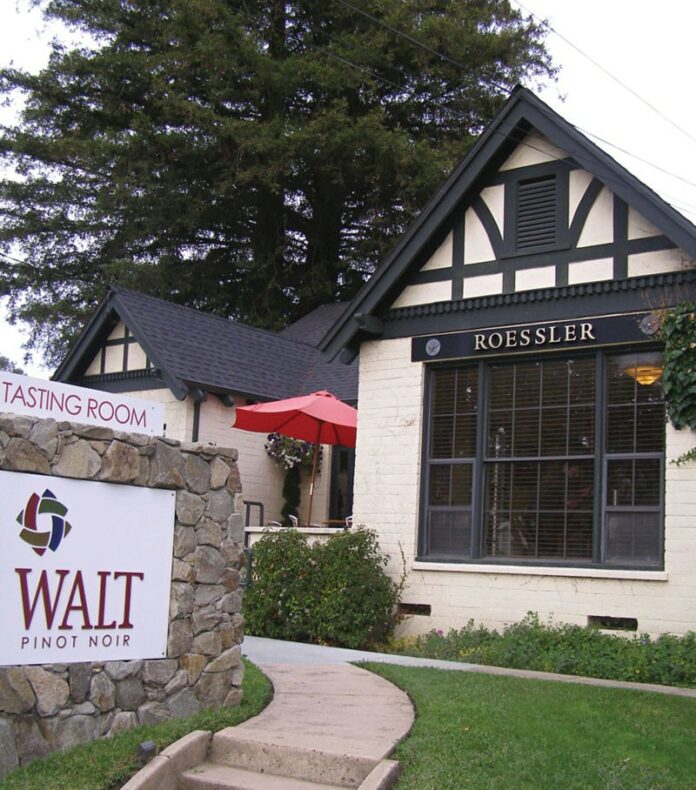 A meritocracy of Pinot

Kudus to WALT for charging a tasting fee that, if not minimal, is more or less the industry’s modest midpoint. No doubt, this helps to retain the odd ducks who stray up First Street off of the Sonoma Plaza, past the sign that reads “Pinot Noir” under “WALT,” only to profess that they aren’t so hot on the varietal. After sampling the product, one recent visitor exclaimed, “Wow, this is Pinot Noir?”

Yes, toots, this is Pinot Noir. This is $40 to $60 Pinot, anyway, with upfront clarity of fruit (thanks to a state-of-the-art optical grape sorter which “learns” to spot bad grapes as the harvest rolls on, ejecting them with bursts of air) and culled from some of the finest grapes on offer from the Santa Rita Hills to the Willamette Valley, with the support of some serious bucks on the back end.

The story so far: In 2010, Chardonnay and Pinot specialists Roessler Cellars sold their brand to Kathyrn and Craig Hall, the same that brought you Napa’s Cab-centered HALL Wines. Former United States ambassador to Austria Kathyrn Walt Hall’s parents, Mr. and Mrs. Walt, natch, are remembered in photographs inside this charming brick and half-timbered Sonoma cottage. The bar is compact, the atmosphere casual, the young fellows running the joint good-humoredly. Guys named Walt get special privileges—or so they tell one such vintage of felt-hatted gentleman, who proceeds to have an absolutely fine time with his party around a small table in the front room. Out back are picnic tables and a grill, which may be fired up whenever a friend of the tasting room saunters over with some tri-tip. Like I said, casual atmosphere.

From a sought-after vineyard on the lumpy western slopes of Sonoma Mountain, the 2010 Gap’s Crown Pinot Noir ($60) is brawnier and sweetly reminiscent of strawberry jam and olallieberry wine. Again with the cool-toned fruit, the changeable 2010 Hein Family Vineyard, Anderson Valley Pinot Noir ($60) deepens toward dried black cherry flavors with a splash of cola, spiced with white pepper, vanilla, cinnamon and spearmint.

For the white wine crew, WALT offers the 2010 “La Brisa” Sonoma County Chardonnay ($35). It’s nice, but who will be the first to exclaim, “Wow, this is Chardonnay?”