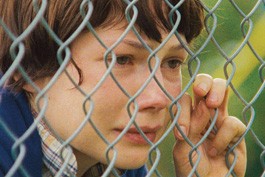 Michelle Williams is a poor wayfaring stranger in 'Wendy and Lucy'

It’s not that Wendy and Lucy is mediocre; at about 80 minutes long, it doesn’t have the time to be. And it’s a simple story. Having left her family back in Muncie, Ind., Lucy (Michelle Williams) is driving her old Honda to the fisheries in Alaska. With her is her part-Labrador Lucy (played by the director’s dog). In a nowhere town in northern Oregon, Wendy’s car refuses to start. Losing her car, Wendy soon also loses Lucy. She’s stranded and broke, befriended only by an old security guard who lets her use his cell phone.

This is the kind of movie that’s usually given the small-camera treatment for budget reasons or to give it more grit. Director Kelly Reichardt (Old Joy) and her two cinematographers worked hard on the composition and color. If you’ve ever had the foolish reverie of getting a sleeping bag and heading for the rail yards to hop a freight train up north, Wendy and Lucy visually idealizes that dream. At one point, Wendy is just a little blue riding hood in a boxcar cruising among the dreamy, foggy trees. There’s further realism in the use of natural sound, with occasional unsynched noise, such as the dubbing of a blare of train horns over talk at a campfire. (The title of Jon Raymond’s source story is “Train Chorus.”)

Until the sustained closeups at the end of the film, Reichardt keeps her cameras at a distance from Wendy. The setups have the sharpness of Edward Hopper paintings, with the heroine perched in the shadows outside a lit-up Walgreens parking lot. Alone at night, she crosses the road to return to the sharp, Ed Ruscha&–like angle of a gas station, where she washes and changes her clothes.

At the beginning of the film, Wendy discovers a group of train-hoppers around a fire. The real professional among them, musician Will Oldham, looks right and grubby until he starts to act, standing up and orating a story about how he got in trouble in Alaska for driving some heavy equipment while stoned. If Reichardt wants to escape the ghetto of being a great regional filmmaker, she’s going to have to figure out a way to coordinate the acting styles in her films. She ought to rehearse the non-actors to the point where they look natural or else cut their dialogue down to a minimum.

As for the star, Williams can hit the notes; she’s slight, thin-legged, fragile enough that we’ll worry about her. The problem is that Williams is too skilled. Nothing sticks out more than poised acting in a naturalistic film.

Unlike Agnes Varda’s 1985 classic Vagabond, what happens to Wendy is never her fault. She has none of the usual problems of a wanderer: no tendency for drink or drugs, no alienating tattoos, no interest in hooking up with men or women. It’s in Wendy and Lucy‘s interest to present Wendy as an innocent version of everyone we ever ignored or refused to give spare change to. We can watch her and feel the panic of what might happen to us if we ran out of money or tried to make a break for it.

The situations in Wendy and Lucy are plausible, and it resolves on a point that’s absolutely ancient-movie effective. It would have worked as well in 1909 as 2009. That might be enough for some audiences, who won’t miss the answers to the questions about what Wendy’s running from or what she’s running to. Ask the average person what makes Wendy wander, and he’ll say, “It’s the economy, stupid.” But the truth is that unlike Sandrine Bonnaire’s Mona in Vagabond, this Wendy is a stranger to us as much as she is to herself.