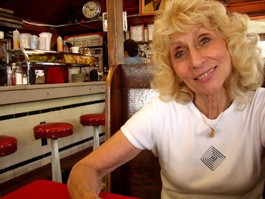 Waiting in the U.S.A.

She pours your coffee before you’ve noticed you want more. She calls you “Hon” and makes you feel at home. If you’ve met her more than three times, she probably remembers your name. She’s everywhere.

Diner waitresses across the United States are the subject of “Dishing It Out,” artist Candacy Taylor’s multimedia exhibit showing through July 13 at COPIA in conjunction with “Counter Culture: The American Diner.” Taylor, who began documenting the lives and words of these women for her thesis project while studying for her masters’ degree at the California College of the Arts, worked as a waitress at San Francisco’s Blowfish to put herself through school. While employed in this noble profession, Taylor couldn’t help but notice how younger waitresses in their early 20s (Taylor is now 35) complained constantly about how hard the work was.

“It is hard work, and it’s really overwhelming,” she admits, seated in a Potrero Hill coffee shop. “So I began to wonder how, then, do 70- and 80-year-old women do it?”

Her curiosity piqued, Taylor began to research diners and coffee shops, but books only “had maybe five pages devoted to the waitresses,” she recalls. “The rest was usually about these architectural American icons [diner buildings], but there was really nothing about the women.”

Taylor decided to focus her thesis on these women. To find the waitresses that would eventually participate in the project, she called the Chamber of Commerce or visitor’s bureau in whichever town she wanted to visit. Originally, all the cities were on the West Coast; in the last five years, Taylor has taken the project nationwide. The women Taylor sought were at least 50 years old and had to have worked in the industry for at least 20 years. Having located waitresses who matched her criteria and were willing to be interviewed for the project, Taylor hit the road. She’s logged nearly 7,000 miles in her trusty Honda Civic.

Setting out to look at the stereotypes and assumptions that are made about waitresses, Taylor wanted to find out how the role has been raised to iconic status, expose the assumptions so often made about these women and give the fictionalization of the job some real-life status. When Taylor began the project, she imagined the servers as tired, maybe even bitter from “having to be” a diner waitress their whole lives.

“I projected the assumptions of our culture onto them,” Taylor says, “even though as a waitress myself, I knew stereotypes like ‘waitresses are broke’ or ‘waitresses are dumb’ to be untrue.”

After eight years, Taylor left Blowfish just a month ago. “I held on to it forever because it’s a great way to make a full-time wage on part-time hours,” she explains. Now Taylor works only on the project, which has expanded to include the beginnings of a book and a documentary film. “Before grad school, I worked in the film industry as a scenic artist, but never considered making my own movie, because I was scared of the cost,” she says.

The multimedia exhibit itself reminds the viewer of a blown-up coffee-table book. Images of both the interiors and exteriors of diners are interspersed with portraits of the women who work them and text from the interviews Taylor conducted.

Most visitors walk briefly by the portraits, chuckling at the waitresses uniforms and silver coifs, but it’s what these women have to say that stands out most starkly. The recurring theme is how satisfied they are. They say that waitressing keeps them feeling younger, keeps their minds sharp and fulfills their desire to make meaningful human connections. They are proud of their sincerity and secure in the knowledge that they are doing exactly what they want to be doing with their lives.

“It takes a different kind of person to do this work. You’ve really got to want to do it,” reads a quote by Carol of San Francisco.

“Younger waitresses flirt with the customers, thinking they’ll get more money, but it’s about service. Most people don’t understand what waitresses do. Waitressing is a dying art,” reads the text by Rachel of North Hollywood.

“You have to love what you do. Seventy percent of waiters and waitresses should not be. They want to take your order and get a tip. They use it as a means to an end,” says Jean of San Francisco.

Taylor also aims to deconstruct the stereotypes that waitresses are poor and/or uneducated. Most of the women she interviewed drove new cars, owned their own homes and had sent their children to college–often as single mothers. “Waitressing afforded these women a very comfortable lifestyle,” Taylor explains.

Several of the women interviewed worked simply because they loved it. Sondra, a waitress at the Butter Cream Cafe in Napa, says, “You have the great customers, and then you have the ones who think you have to be here.” Her husband “makes a good living,” so she doesn’t have to work. She just loves to.

Many of the women interviewed had also tried other lines of work and eventually returned to waitressing. Women with college degrees and women with experience in public-relations or other corporate environments found themselves drawn back into restaurants. Geri from Pennsylvania says, “I worked as a manager for a few years and realized I’d rather be waitressing, one-on-one with the customers rather than scheduling and ordering. I find office work boring and cannot sit all locked up with no sunshine.”

Initially, Taylor had wanted simply to learn about the women, but somewhere along the line her emphasis changed. “People walk into a diner and feel sorry for the 70-year-old waitress, and they shouldn’t,” she says. “From my research, 95 percent of these women absolutely love what they do, and take it very seriously. A lot of them try to retire, but go back to work because they miss it.”

Although waitressing can be physically exhausting and emotionally draining, the physical benefits of this kind of work are “incredible,” Taylor affirms. “You’d think a lot of these women would have carpal tunnel or be complaining about the physical aspects of the work, and they don’t. A lot of the waitresses over 70 say that without waitressing, their arthritis would be crippling, or that they would be buried!”

Taylor also acknowledges that depression can be a big issue for seniors, especially when they don’t feel useful or needed. For many, waitressing fulfills this desire. Some of these women started work when they were 13, and have never wanted to do anything else. “I wouldn’t do it for this long if I didn’t love it!” says one of her subjects. Taylor has twice been a speaker at the conference for the American Society on Aging, where she presented older servers as models for healthy aging.

Did Taylor ever find the answer to her original question of why younger waitresses complain so much?

“Our generation is conditioned to be ‘professional,'” Taylor explains. “We’re supposed to have a ‘real’ job, and waitressing isn’t seen as such.” Older women, she says, didn’t have as many options when they were entering the work force, and this created a different ethic surrounding work. Today, the tension that surrounds the question of what to do with your life is nearly palpable, with books on the quarter-life crisis being published almost quarterly.

“Work is supposed to fill all of these needs, and the service industry, with its roots in being a servant, is seen more of a means to an end rather than a career choice in itself,” Taylor says.

The women documented in “Dishing It Out” have chosen. They’ve chosen human connection over corporate nonidentity. They’ve chosen sincerity. They’ve chosen their paths, and gladly. The images and words of these strong women are lasting and powerful. And they might make you think differently about that woman who pours a warm-up in your white ceramic mug.